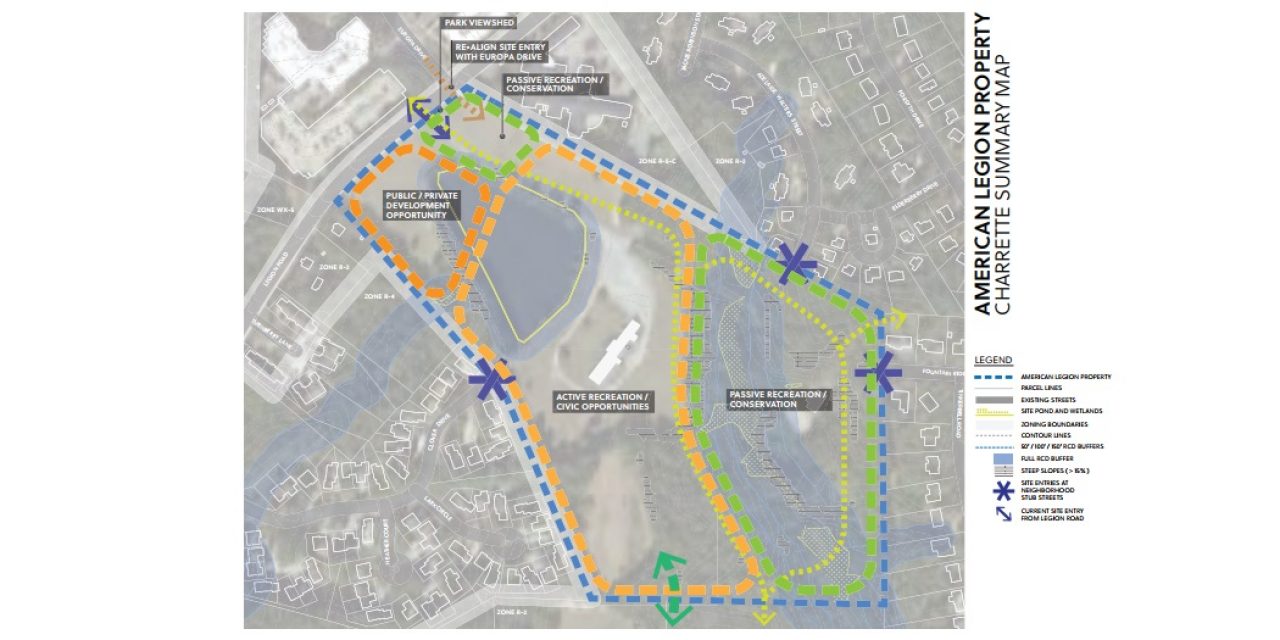 A new report on redevelopment options for property once owned by the American Legion in Chapel Hill is putting public opinion at the forefront of design discussions.

Those options were synthesized from guidance given by residents during a community charrette facilitated by Dan Jewell and his team of landscape architects.

“To our delight, we had at least 125 people sign the sign-in sheets, and we know there’s probably people that slipped by without actually doing that, so it was a really good day, it was really well attended, and, personally, we had a blast.”

A task force was created earlier this year by local officials to discover the directions that residents want the town to take regarding its latest land acquisition.

Seven of those directions were presented last week to the Chapel Hill Town Council by Rachael Shaevitz, who serves as the elected chair of that task force.

“The theme of all four meetings and the charrette was opportunity,” she explained.

“Our community is really excited about the possibilities of this space, and I think that’s why they are so eager to fight for their beliefs and their opinions and what they want to see in this space,” she explained.

Six of the seven plans briefed to council members by Shaevitz call for pockets of mixed-use development surrounded by green space and public activity areas.

With the semi-commercial nature of those plans in mind, Shaevitz reminded town officials that redevelopment for the site should favor principles over profits.

“Any sale of land that might happen on this place should yield the highest possible return for a use that fits in with our principles,” she insisted.

“If land is sold, we can’t control that, but what we would love to see is that the land is sold to achieve one of the uses that we suggest, which is: serving the community, not members-only, something that supports a healthy lifestyle.”

Amid talks on whether to permit a nursing home or a medical center on the property, Council Member Maria Palmer stated her preference for tourist-friendly site anchors.

“It’s starting to feel like this is the hospital town, and, also, I don’t want to see property bought by somebody who’s not going to pay taxes,” she stated.

“I don’t know how a nursing home is compatible with lots of youth and tournaments and tourist activity; that’s something that I have to wrap my head around.”

The American Legion sold its 36-acre parcel of land in Chapel Hill to the municipal government last year, but it has rights to part of the property for another three years.

Council Member Michael Parker advised Shaevitz to have the task force remain decisive and focused in spite of vague timelines for site redevelopment.

“What we’re hearing is that we don’t need to make any decisions for three years, and yet the task force will go out of business within the next six or eight months,” he mused.

“Basically, what would happen is, either the task force stays around for a whole lot longer — and I don’t think that makes a lot of sense — or you’re going to be basing any evaluations on incomplete information, because if we’re keeping the door open for two or three years, who knows who will show up next year or the year after that.”

The task force is expected to continue working until next April to vet potential development partners and make recommendations to council members.