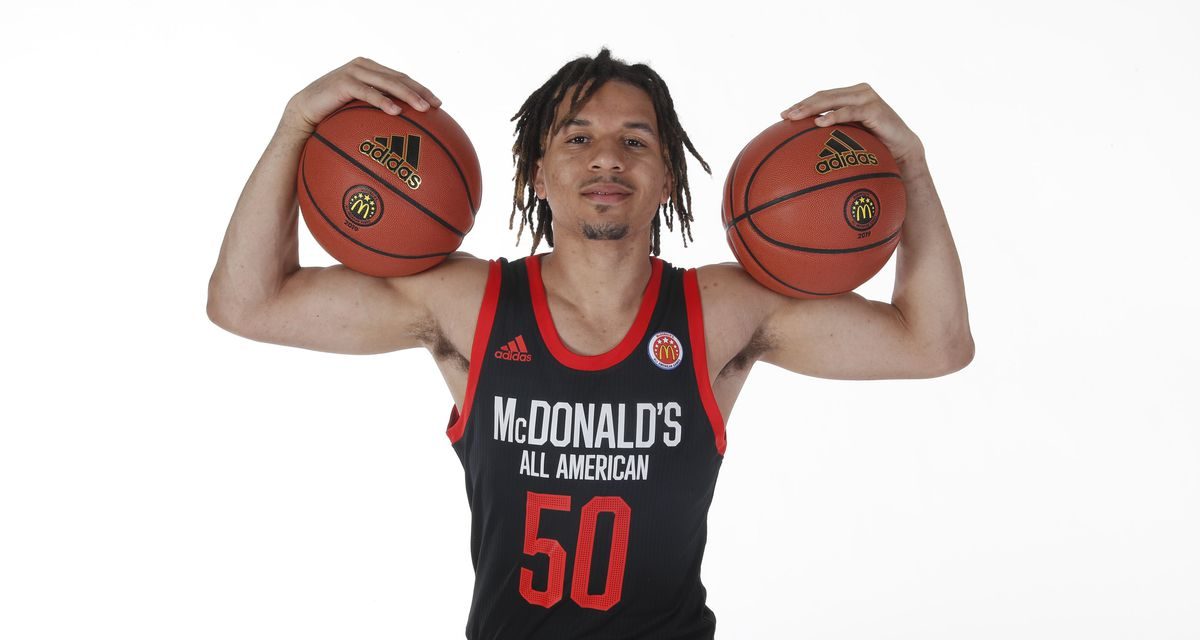 After months of waiting, five-star recruit Cole Anthony has signed a National Letter of Intent to play at North Carolina

Ranked as the No. 4 overall player in the nation in the 247 Sports Composite, Anthony chose the Tar Heels on ESPN over finalists Oregon, Georgetown, and Notre Dame.

“We’ve really pushed this decision back a lot,” Anthony said. “We really just kept looking at all our schools and I always winded up going back to Carolina. It felt like a family to me, I love Coach [Roy Williams], Coach [Hubert Davis]. If it was up to me, I’d be on campus tomorrow.”

Anthony, son of former NBA player Greg Anthony, started his high school career in New York before transferring to Oak Hill Academy in Virginia for his senior season. Oak Hill Academy is renown as one of top prep basketball schools in the country and has produced many NBA players, including Kevin Durant, Carmelo Anthony, Rajon Rondo, and former UNC stars Jerry Stackhouse and Ty Lawson.

“We’re thrilled with Cole’s decision to attend North Carolina,” said Roy Williams in a statement. “He is one of the most complete point guards I have ever recruited. He has all the physical skills, but he has a competitiveness, a toughness and a savvy that I really like. I first saw him as a ninth-grader and since then he has gotten better and better and I know he will continue to improve. He comes from a great family. His parents are very involved in his life and are fantastic people. We couldn’t be happier that Cole and his family are joining our Carolina Basketball family.”

…And @2ez_nassie would’ve done it last year if the schedule allowed. BELIEVE THAT!

The commitment from the New Jersey native comes at a critical time for Roy Williams and UNC.

After losing in the Sweet 16 to Auburn in this year’s NCAA Tournament, UNC said goodbye to seniors Luke Maye, Cam Johnson, and Kenny Williams. Maye and Johnson were All-ACC performers in 2019, with Johnson earning team MVP honors as well. The trio combined for 225 starts over their careers in Chapel Hill.

Not long after, freshmen Coby White and Nassir Little declared their intentions to enter the 2019 NBA Draft. White broke Michael Jordan’s freshman scoring record at UNC and started all but one game for the Tar Heels last season. Little was one of UNC’s highest ranked recruits in team history and was the Tar Heels’ primary option off the bench.

Anthony will have a chance to start right away for the Tar Heels in the point guard role vacated by White. Along with fellow signees Armando Bacot and Jeremiah Francis, Anthony will be crucial to UNC’s efforts in reloading and contending for an ACC title during the 2019-20 season.

“It’s a tremendous basketball tradition,” said Crystal McCrary-McGuire, Cole’s mother, when talking about the decision to choose UNC. “Coach Williams, world-class Hall of Famer, Hubert Davis, the entire coaching staff and just the environment. The fans at UNC are just absolutely some of the best and they really did make us feel at home.”