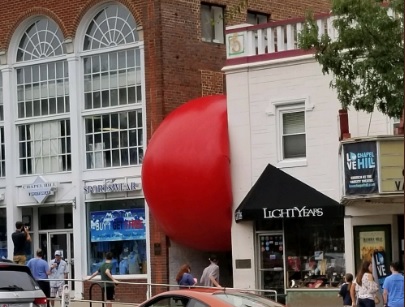 The world’s longest-running public art installation is making its way around Chapel Hill.

The RedBall Project, created by Asheville-based artist Kurt Perschke, is a 250-pound, 15-foot-diameter inflatable red ball placed in a different location around town each day.

“The entire performance is temporary,” says Perschke. “Each site is just a day, and for me the project is very much about being able to look at the physical space we inhabit – the city, the town, the community – and play with it, literally, as a canvas.”

The installation was brought to Chapel Hill through a partnership between the Chapel Hill Public Library and the Ackland Art Museum to celebrate the Ackland’s 60th anniversary.

Ackland’s assistant curator Lauren Turner says the RedBall Project embodies many of the ideals held by the Ackland.

“We had been thinking about how to celebrate our 60th anniversary in a really grand fashion, because it’s 60 years of being a central resource for the campus and being at the intersection of town and community,” says Turner. “We pride ourselves on always being free and open to the public, so this really appealed to us as a project that we could get even more into the public.”

The RedBall Project has been to over 25 cities around the world including Barcelona, Taipei and Chicago.