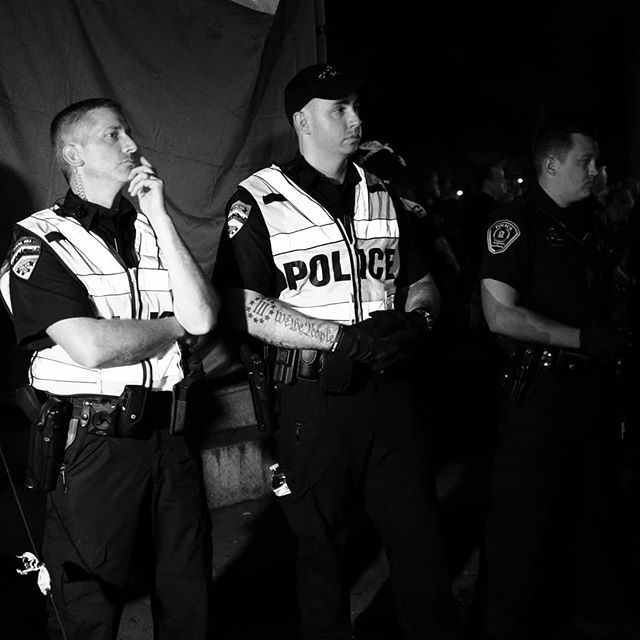 A Chapel Hill Police officer has been placed on administrative leave with pay after a photo circulated of the officer with a tattoo associated with an anti-government militia-style group.

Cole Daniels was photographed the night the Confederate monument known as Silent Sam was pulled down from its pedestal on the UNC – Chapel Hill campus. A tattoo on Daniel’s right forearm was a logo associated with the “Three Percenters” group.

A statement from Chapel Hill Police in the immediate aftermath of last Monday’s rally said that Daniels would have the tattoo covered when on duty in the future.

But an email from Chapel Hill town manager Roger Stancil on Wednesday night said that Daniels had been placed on administrative leave with pay on August 27.

“The pervasiveness of the concerns raised by many regarding his display of a tattoo that is associated with the ‘3 Percenters’ has caused the Department to question his ability to function effectively as a police officer within this community,” Stancil wrote.

Daniels will remain on leave, Stancil said, pending the outcome of an administrative investigation “in accordance with our Town’s Personnel Ordinances and policies and procedures.”

Stancil wrote that further information will not be released at this time because the situation is considered a personnel matter.

A police officer standing guard at Silent Sam sports a tattoo with the three percenter symbol. These "patriot" groups have been known to openly protect racists, fascists and neo-Nazis including on A12 2017 in Charlottesville and in Portland for the Patri… https://t.co/TEACCPatKx pic.twitter.com/vDfjwE7oQl