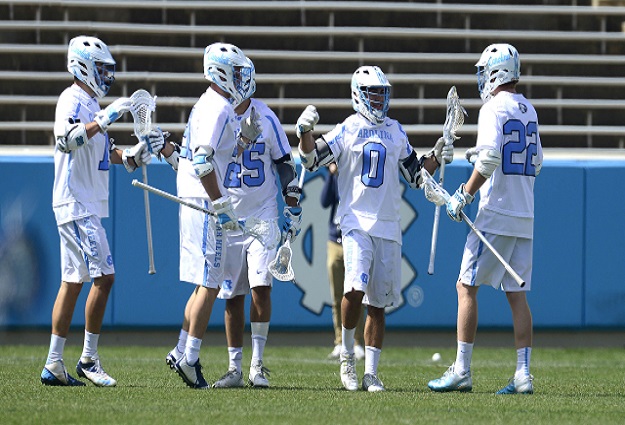 No seed, no problem for the UNC men’s lacrosse team on Saturday afternoon.

The Tar Heels, who were not given a national seed for the NCAA Tournament, traveled to Milwaukee and eliminated the No. 6 seed Marquette Golden Eagles 10-9 at Valley Field to advance to a familiar place–the national quarterfinals.

Despite being held scoreless over the final ten minutes, UNC (9-6) held off a late rally by Marquette to eke out its 24th appearance among the country’s final eight teams.

In just their fourth full season as a Division I program, the Golden Eagles finished the year at 9-5 and as champions of the Big East Conference.

UNC’s experience in tournament situations ultimately proved to be a bit too much for the upstarts. 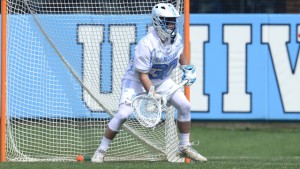 UNC goalie Brian Balkam saw his defense hold strong in the final minute to preserve a win over Marquette in the first round of the NCAA Tournament on Saturday. (Jeffrey A. Camarati/ UNC Athletics)

Led by junior midfielder Michael Tagliaferri’s three goals and one assist, the Tar Heels showed a persistent offensive attack that continually kept Marquette on its toes–compiling 37 shots throughout the game.

Attackers Steve Pontrello and Chris Cloutier each scored a pair of goals for UNC, while midfielder Shane Simpson added one during the second quarter.

Cloutier’s second goal came in the fourth quarter with the Tar Heels on a man advantage, and gave UNC its biggest lead of the day–at 10-7.

But that moment ended up being the last time head coach Joe Breschi’s squad found the back of the net.

Marquette clawed back from the three-goal deficit over the final minutes, aided by a delay of game penalty on UNC with just under two minutes to play–a call that ultimately led to a goal by the Golden Eagles.

The Tar Heel defense tightened up however, and fought off Marquette’s final offensive push.

After a wayward shot found its way into the goal crease with about 20 seconds to play, UNC was able to gain possession and hold on until the clock hit triple zeroes.

The Tar Heels await the winner of No. 3 Notre Dame and Air Force for their quarterfinal matchup.

Although UNC has made it to the quarterfinals 24 times, and in four of the last seven years, the Tar Heels have not made it to the Final Four since 1993.