There is an argument that craft beer is at least partially a revolt against the “lite” beer craze of the 80s. Many people wanted something that tasted better than the ubiquitous American Industrial Lager, but when the almost but not entirely tasteless Lite beer was introduced, folks just had enough. That’s when we started making fresh, flavorful beers that hit you in the face with malt, hops, roastiness…the cornucopia of flavors that beer makers had abandoned for the sake of the lowest common denominator.

Needless to say, calories were the last of our worries. Taste was what mattered, and if that meant drinking 250 calories/bottle, then I’d happily have traded in a sandwich for the experience.

Times they are a changin’ though, and people kind of want to have their cake and eat it too. While we love the idea of flavor and lost beer styles and high ABVs, some of us are more and more conscious of the impact this interest is having on our health. So it begs the questions: Are their Light Craft Beers? And if so, are they worth it?

Bell’s Light Hearted Ale, the cross-fit doing little brother of Bell’s beloved Two Hearted, is probably the finest example. This low-cal IPA won’t ring your bell at 3.7% ABV, and it only packs 110 calories. But the take-home message on this guy is the flavor. Like it’s Centennial hop focused older brother, this guy packs a nice amount of American hop character into his small, wiry frame. You’re not sacrificing much flavor with this one, so it’s a no-brainer.

The Go Getter IPA from Hi-Wire is another fine example made much closer to home for us North Carolinians. A fruity/citrusy IPA, this one is only a smidge higher in alcohol (4%) but sports only 100 calories. Once again, you can’t go wrong with this one if you’re trying to watch your waist and still enjoy a fine beverage.

Dogfish Head’s Slightly Mighty rounds out this trifecta of lo-cal beers. This one if for our hazy IPA friends. With the addition of monk fruit, we get a much more fruity and less bitter IPA experience here but with nothing like the calories or ABV of its progenitor. 95 calories, 4% ABV, this offering from one of the early leaders in craft beer is a fine choice if you’re counting calories. 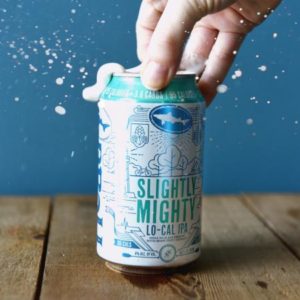 In an ideal world, like Valhalla, we would all be guzzling as much ale as we wanted and not worrying about the consequences. But responsibility rears its head more often than we’d like and we are all slaves to it (or maybe we at least should be?). Would I prefer a full-bodied, malty AF American IPA with hops pouring out of it? Yes. But would I judge you if you chose to have a lo cal IPA because of (reasons)? Nope. You do you, man. You do you.