I make no secret of the fact that my favorite thing about beer is hops. I love the aroma, the flavor, and while I don’t necessarily get excited about it, I’m intellectually appreciative of the antimicrobial properties of this special plant product.

As a brewer, I often take for granted the knowledge of what hops do for beer, so it’s easy to forget that folks out there just don’t know (and why would they?) what hops impart to their favorite beverage. So I’mma drop some knowledge on ya.

Let’s talk about what hops are, precisely. The bits that brewers use are the cones (flowers of a sort) of the female hop plant. Without getting too science-y, these little cones (picture a mix between a flower and a pine cone) have tons of acid and oils that do all kinds of wonders for beer.

Beer, you might not know, starts out as essentially a barley soup. We boil that soup for several reasons. For most beers, we add hops at the beginning of the boil. These are referred to as the bittering hops. Once again, avoiding the science, the longer you boil hops, the more bitterness you get from them. 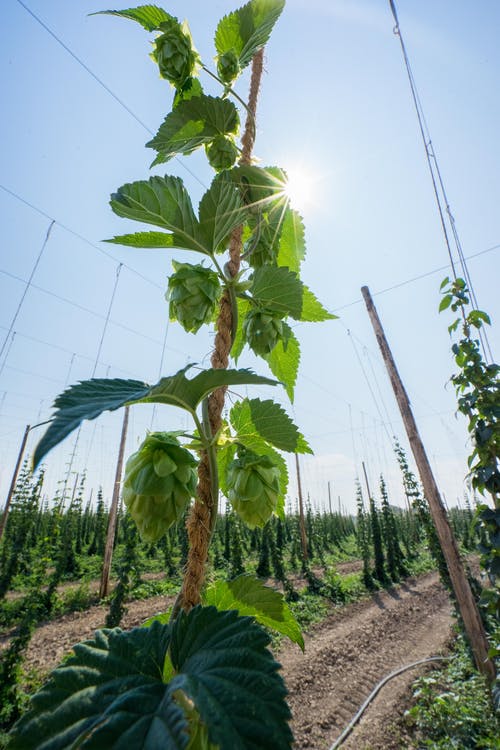 Sometimes you’ll see the letters “IBU” on a beer. This stands for International Bitterness Units. For the third and last time I’ll not beat you with the science, but this number comes from a formula that considers how much of what hop acids you’ve boiled for how long in your wort and gives us a handy dandy numerical value that in a way gives us an idea as to how bitter the beer is. From your little lesson above, you can imagine that if you put a lot of hops in at the beginning of the boil, you’ll end up with a much higher IBU than if you skip that.

But this brings up some even more interesting things about hops, beer, and IBUs. A few years ago the cool beer was a hoppy wheat beer — and one of the local NC brewers made one that was hoppy as all get out and bitter enough to suit any hop head. Yet it had 0 IBUs. How did they do that? All of the hops were added at “flame out” or when the boil was ended. So a lot of hops got in there, but from a chemistry standpoint, very little of the alpha acids were isomerized, so while from a formulaic standpoint the beer was not hoppy, it was in fact so. Also worth noting is that many of us have varying sensitivities to hoppiness, but almost none of us can taste a difference past 100 IBUs. So you can have a 140 IBU beer and virtually no one can tell you that it’s more bitter than a 100 IBU beer.

But is it just about the bitterness? Well, for some of us, maybe it is. But as a happy (hoppy?) accident it turns out those lovely little cones do a bit more. Those bitter compounds are not great places for bacteria to live in, and as a result, your beer lasts much longer and doesn’t taste like yogurt juice when it gets to you. Huzzah!

I could go on and on. Hops are dope. Anywho, go getcha some hoppy-@$$ beer and get down with it. Cheers!