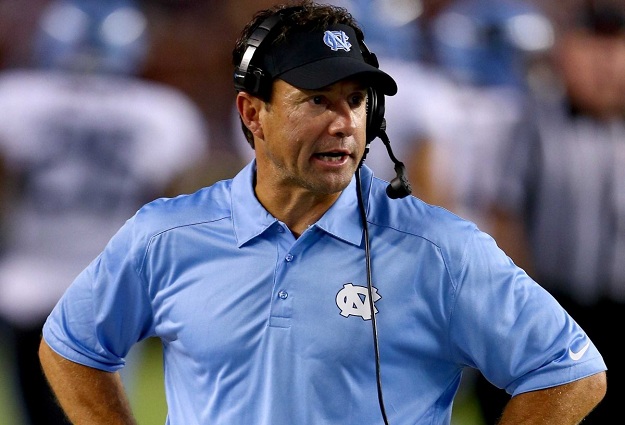 Spring has finally sprung in Chapel Hill and with it; the Tar Heel football team has kicked its practices into overdrive at Navy Field. Armed with a bevy of talent returning to campus this fall, UNC head coach Larry Fedora has his sights set on an ACC title.

It’s a mix of youth and veteran leadership that will suit up in Kenan Stadium. Following a subpar season that left the locker room disjointed and frustrated, 2015 could prove to be a pivotal year in the tenure of Coach Fedora. 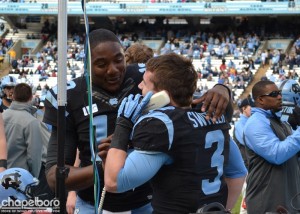 But for now, tucked away from the eyes of Tar Heel Nation and nestled in between Carmichael Arena and Boshamer Stadium, the Carolina coaches and players are busy working on the fundamentals.

“Right now in all four units it’s about mastering the fundamentals that you need to be able to play in all four phases,” Coach Fedora says.

There are more smiling faces coming from the defense these days. Former defensive coordinator Vic Koenning’s schemes were famous for their complexity, but with Gene Chizik now at the helm, things are much simpler.

“There’s a lot less right now, that’s for sure. Gene and those guys have decided how they’re going to install things. They’re working really hard on the base and the fundamentals on what it takes to play in that base defense. They’ve been spoon feeding them as they’ve gone. It’s been good for our guys because they’ve been learning something new each day,” Coach Fedora says. 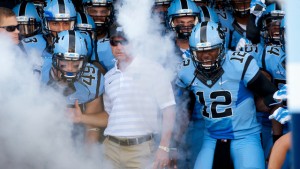 Last year, an inexperienced offensive line spelled trouble for protecting quarterback Marquise Williams in the backfield. More often that not, Williams found himself scrambling for his life against the higher-caliber opponents.

But Coach Fedora says he’s much more comfortable with the big guys up front heading into 2016.

“We’ve got some depth there now. We’ve got guys like John Heck, Landon [Turner] and [Lucas] Crowley. Those guys got a lot of reps all last year. They’re very comfortable out there. You’re seeing them get better and better each day,” Coach Fedora says.

One of the biggest question marks for the Tar Heels comes in the special teams department. Last season, Coach Fedora lost all confidence in his field goal unit and was all too often forced to go for it on fourth down in situations every team would like to have a reliable kicker to nail it through the uprights.

So how are the kickers looking right now?

“It’s a lot of drill work right now. We aren’t doing much scheme work at all in our special teams units. We still have a long way to do with our punters. I think we’ve made some strides with our kickers, but we still have a way to go,” Coach Fedora says. 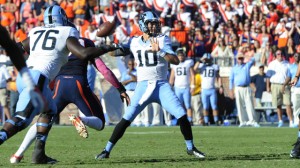 Mitch Trubisky continues to work on his game (UNC Athletics)

With Williams still recovering from his hip injury, redshirt sophomore Mitch Trubisky has been getting plenty of reps behind center. The former Mr. Football of Ohio played some meaningful minutes in 2014, but Coach Fedora says he’s seeing a ton of growth this spring.

“Mitch is getting all of the reps with the ones [starters]. Every rep he gets, he’s growing and becoming a better quarterback,” Coach Fedora says.

There’s enough skill on the UNC roster to contend in an ACC Coastal division that remains up for grabs.

But glaring weaknesses on the defense and the kicking game will need to show marked improvement for the Tar Heels to take the next step and get to their first ACC Championship game in Charlotte this December.