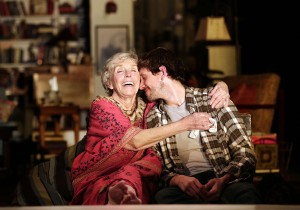 It’s one of the most acclaimed plays of the last three years – and it’s coming to Chapel Hill this weekend.

PlayMakers Repertory Company wraps up its 2014/15 mainstage season with the regional premiere of Amy Herzog’s “4000 Miles,” an Obie Award-winning play about an elderly woman who makes an unexpected connection with her grandson after he comes for (what turns out to be) an extended stay. Herzog’s play has won many honors: on top of the Obie Award for Best New American Play, Time Magazine named it the best new play of 2012 (musicals included) and it was a finalist for the Pulitzer Prize.

Dee Maaske plays the grandmother in PlayMakers’ production. A longtime theater veteran, Maaske has spent 21 years with the Oregon Shakespeare Festival and acted on three different continents. The director too is a special guest: Desdemona Chiang, a Seattle/San Francisco-based director whose work has appeared on stages nationwide. (Including PlayMakers: Chiang directed last year’s summer repertory production of “Hairspray.”)

Chiang spoke about the show with WCHL’s Aaron Keck.

“4000 Miles” opened for previews on Wednesday. Opening night proper is this Saturday, April 4, and the show runs through Sunday, April 19 with shows at 7:30 Tuesdays through Saturdays and 2:00 matinees on Saturday and Sunday. Tickets are available online at PlayMakersRep.org/4000Miles.