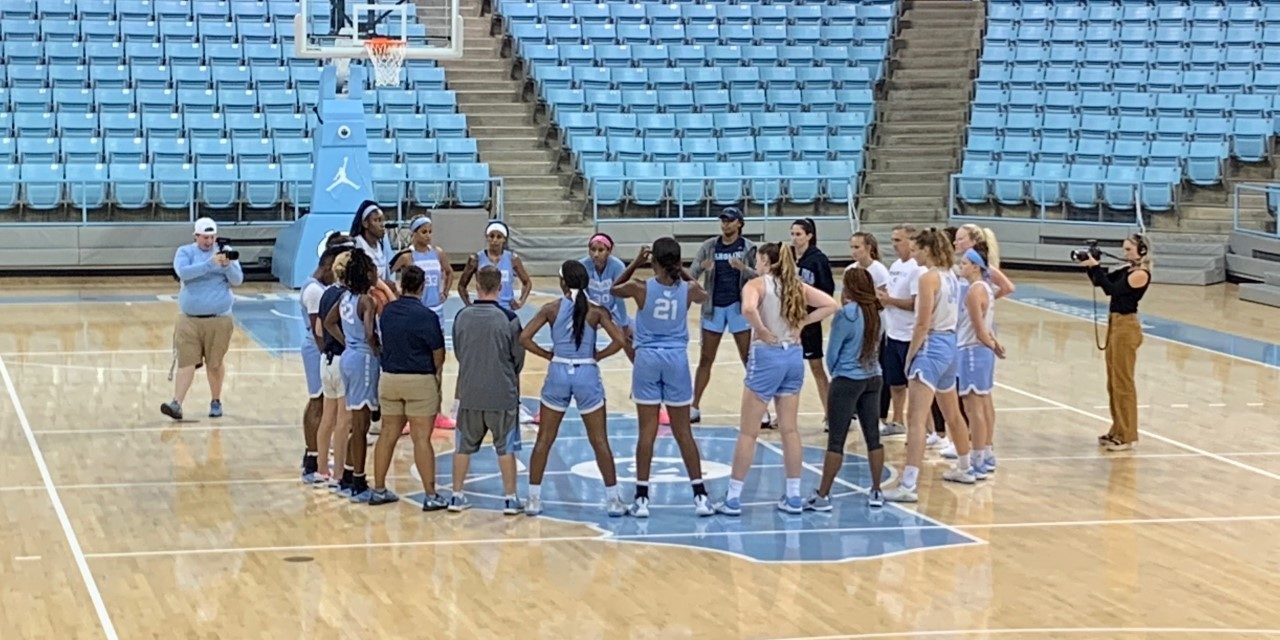 It’s the first season in many years where the UNC women’s basketball team is being led by a different head coach. As the players adjust to new leadership, head coach Courtney Banghart is settling into her new position and school too.

Banghart led the team’s first official practice with lots of energy and passionate instruction last month. After 12 years as the coach of Princeton, she is still learning exactly how she wants to utilize the talent she has on the Tar Heels’ roster. Between coordinating with a new staff, learning about the school and recruiting in a new region, her adjustment to working at UNC continues every day.

But when she’s working with the players, she said she already feels right at home.

“College basketball is 94 feet, you play with a leather ball, and these [players] are wearing light blue,” Banghart said to the media following the practice. “That part of it is my comfort zone. It’s good to be in a place like this where I’ve been on the court basically since the day I got here.”

Banghart steps into the position at a time of major change around the women’s basketball program. She was hired in April following the resignation of Hall of Fame head coach Sylvia Hatchell. Hatchell had coached the Heels since 1986 and led them to a national championship in 1994. But after student-athlete complaints sparked a review of the program by the university, it was found Hatchell made racially insensitive remarks and may have created a culture that pressured players to return from injuries sooner than advised. She resigned as head coach shortly after and several players entered the transfer portal.

Banghart acknowledged the stress such controversies leave on a program, saying she and the current players have used those experiences to grow together and transition to her coaching methods.

“No one signs on for the void that is losing a coach,” Banghart said. “I had void too, because I left a team. We kind of met in the middle of that void. They’ve [had their] eyes and ears open to how this program is going to be under my leadership. It’s been a process.”

On a campus with many other Hall of Fame coaches, it could be easy to become intimidated or feel overshadowed. Banghart said, though, she’s felt nothing but welcomed by UNC’s other athletic programs. She said many of the other coaches have helped her navigate her transition to campus by answering her questions and helping with recruiting. Banghart even joked that Sally Brown, the wife of football head coach Mack Brown, should watch out because she talks with Mack nearly every day.

“This is a community,” said Banghart. “Just like it is for the student athletes, I’ve found that it is for the coaches as well. I feel like the new guy, but I feel like people are wrapped around me, at times pushing me and carrying me to the excellence they currently have. It’s been an honor.”

UNC women’s basketball tips off their season on November 2 with an exhibition against Wingate before hosting Western Carolina on November 7.