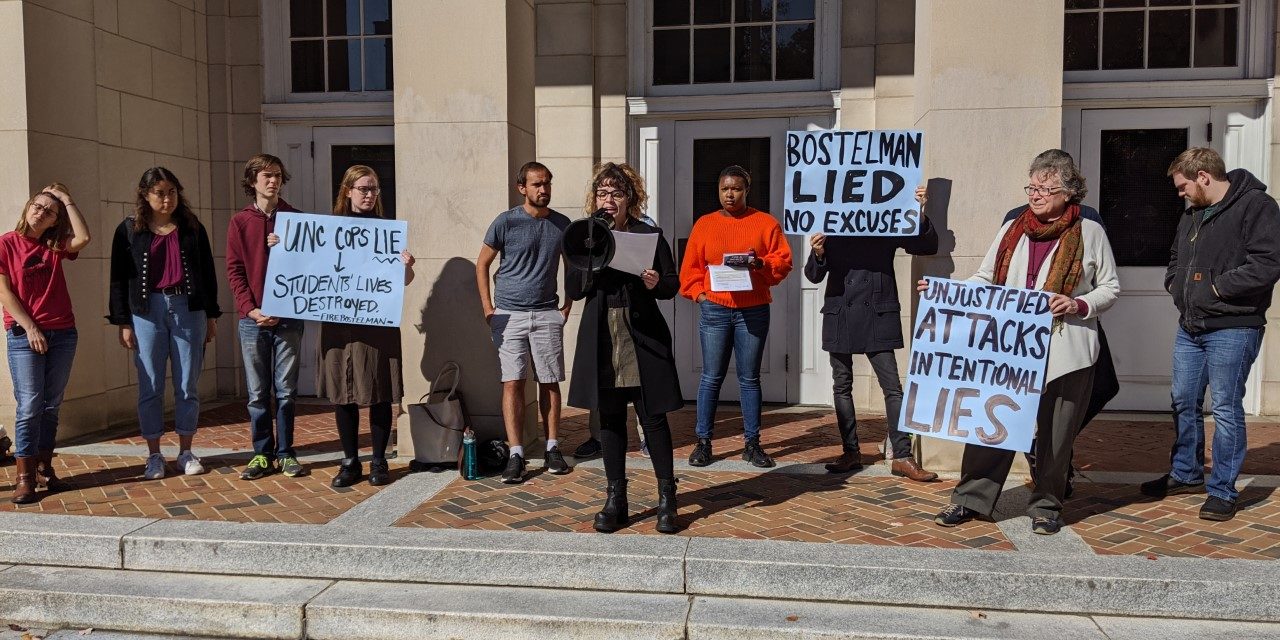 In the wake of an external report reviewing UNC Police’s handling of arrests during protests after the toppling of Silent Sam on campus, student and community activists spoke out against the report’s conclusions on Wednesday. They said while it addresses missteps of the campus police force, it does not hold them accountable enough.

UNC undergraduate student and Black Congress member De’lvyion Drew helped lead the group gathered at the Peace and Justice Plaza across Franklin Street from campus. She shared her fears of being a black student on UNC’s campus while tensions between students, university police and outside demonstrators continue.

“There’s no peace when white supremacists who are ready to kill [us] come to this campus armed,” she said. “That is not peace.”

The report, conducted by Charlotte attorney Chris Swecker, examined the actions of the campus police force and other assisting officers during four separate events sparked by tensions in the wake of Confederate statue Silent Sam’s removal from campus. The external review was ordered following criticism from students and community members that UNC Police acted with preferential treatment to pro-Confederate demonstrators.

The report concluded while the police officers’ motivations were not out of sympathy nor animosity toward any cause, there were “serious shortcomings in proper police procedures,” in all four incidents. False testimony of an officer in court over a student’s arrest, little effort to use additional footage beyond officer-worn body cameras during investigations of arrests and failure to arrest armed demonstrators were among the report’s findings.

One of the incidents reviewed by Swecker occurred on March 16, when members of a pro-Confederate group referenced in the report as the Virginia Task Force III% were on university property with firearms. The demonstrators were approached by university police but not arrested for openly having weapons on educational property, which is a felony in North Carolina.

In his review, Swecker writes UNC Police officers on the scene did not ask for identification or run any criminal background checks on the demonstrators, who were informed of the no-weapons policy and escorted off campus grounds. He says this was a breakdown of procedure and practice, largely because of the actions of command staff. Swecker reports UNC Police officers were prepared to arrest the group for having firearms, but command staff instructed them to wait until they received clarification from the Orange County district attorney over whether Cameron Avenue and its sidewalks constituted university property.

Swecker wrote the DA called shortly after the demonstrators’ removal to inform command staff anyone with firearms on campus sidewalks or roadways would be prosecuted. He concluded by recommending the establishment of a “clear, documented policy of zero tolerance for and immediate arrest of armed intruders who appear on the UNC-Chapel Hill interior campus on foot.”

At Wednesday’s gathering, Drew and other speakers also criticized UNC Police’s handling of the March incident, as well as their treatment of students during incidents in 2018. Drew said despite the review’s conclusions of no ulterior motives by university police, it displays the difference in which officers treat student-protestors and outside demonstrators.

“These are repeat offenders that were not recognized with the department that had the resources and capacity to do so for students,” said Drew. “In my findings of a critical review of this report, that’s preferential treatment and motivation.” 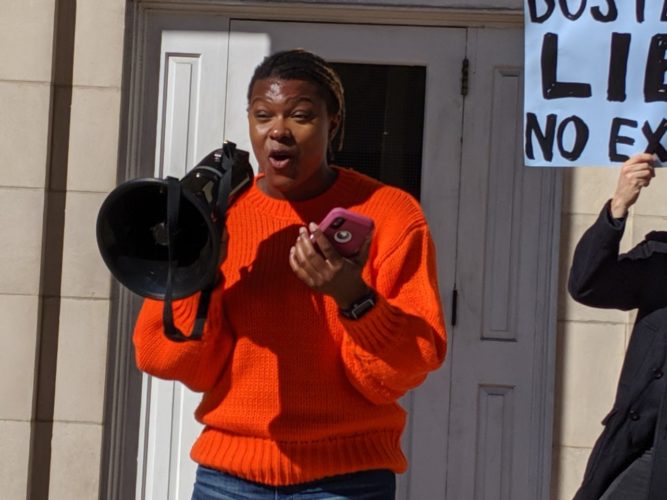 UNC student De’Ivyion Drew speaks at the Peace and Justice Plaza on November 6, 2019.

Drew said unlike the pro-Confederate demonstrators, some of who came from out-of-state, UNC is her home, and she can not leave. She questioned how students should feel protected by UNC Police when examples like the March 16 incident exist.

“Does it take for me, a student, to lose my life before it has any value,” Drew asked. “Does it take any of us students to lose our lives before [university police] takes action? It should not have to.”

Along with the release of the report to the UNC community, Interim Chancellor Kevin Guskiewicz wrote a brief letter addressing its findings.

“I thank Mr. Swecker for his thorough and methodological approach, and I am confident that his review will lead us to a better place,” he wrote. “I would also like to thank the members of our University Police force, who are committed to providing the campus community with a safe environment that enables us to fullfil our core mission of teaching, learning, research and service.”

Drew said she believes, however, Swecker’s approach to the review and the university’s approach to campus safety were not good enough. She read a comment submitted to the Campus Safety Commission, which Drew serves on, about the history of safety issues at UNC.

“‘I can’t believe we are having the same conversations about campus safety that we had when I was a student 30 years ago,’” Drew read. “How is that possible? We have not made strides forward because a stride anywhere puts in jeopardy the existing strategy of the UNC Police Department of oppressing students on campus in efforts to preserve order.”

In response to Swecker’s review, UNC Police Chief David Perry shared a statement saying the department has already made progress on many of the recommendations in the report, including improving policies and implementing new internal controls.

“Our work to restore and enhance trust with the community is just beginning,” said Perry, “and we understand it will take time. I have carefully reviewed all the recommendations in the report and will incorporate those into my priority list of updates to practices and policies, ensuring that our department is operating in line with accreditation standards and best practices around the country.”

Swecker previously advised a security panel created by the UNC Board of Trustees to brainstorm ideas for the future of Silent Sam, including the possibility of constructing a $5 million facility to house the Confederate monument. The proposal drew wide criticism from the campus community.

The full external review can be found on the Campus Safety Commission website.