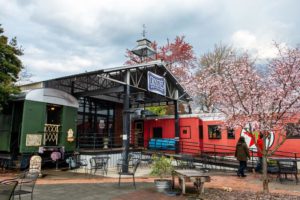 Not so long ago, using “drinking” as a verb conjured images of dark underground bars, late nights, and regrettable decisions. That may still be the case for some of you (us?), but drinking beer can — and should — be done in a different way.

If you, like me, are looking to escape the dingy bar atmosphere as your everyday drinking environment, take yourself over to CrossTies Beer Garden in Carrboro. This neighborhood spot has one of the OC’s best kept secrets — a beer garden! 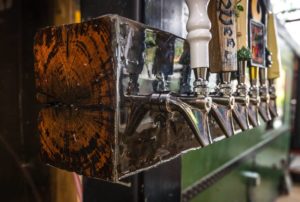 Yes, it’s just like it sounds; it’s a venue where outdoor drinking is legal and encouraged. And this time of year you should be taking advantage of the opportunity to do your drinking outdoors. Think about it! What could be better than sitting comfortably outside in the gorgeous North Carolina spring, listening to your friends talk about the dumb crap that makes you love them while you share pints of fabulous local (and maybe not-so-local) beers?

What’s available for imbibing there, biermeister? I’m so glad you asked! Here are my two favorites they have on draft now: 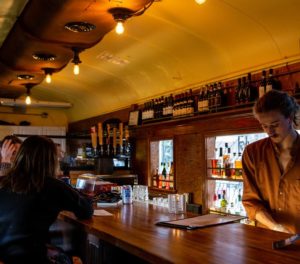 The Bar Car is back! (photo via CrossTies)

White Street Kolsch: A local offering out of Wake Forest, this is the perfect beer to start your session with. A Kolsch is what beer nerds drink instead of industrial lager, but for the same purposes. It’s easy-drinking, light, refreshing, and you can have a few before you know it. True to style, it’s crisp and clean, with a lightly fruity aroma and balance between crackery malt and bitter hops. Have several.

New Belgium Citradelic: With what seems like every brewery having a production facility in Western NC now, “locally made” means something a little different than it used to, but I don’t really care when the beer is good. Citradelic was NB’s response to the citrusy IPA phase of a few years back, and it doesn’t disappoint. Solid American IPA base with crystal malt playing back fiddle to citrusy American hop aromas and flavors, accented by Tangerine peel keeps you coming back for more. A worthy choice!

If you’re looking off the draft menu, they have a very respectable bottle/can line-up. Here are a few: 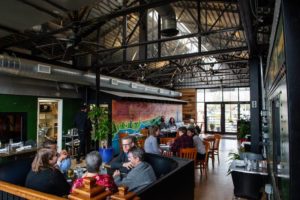 Bell’s Two-Hearted Ale: I have an ongoing discussion with my beer friends that goes something like this… if you were stuck on an island, and could only have one beer for the rest of your life, what would it be. Bell’s Two-Hearted is always a contender in this discussion. It’s hard to be better than this IPA.

Foothills Jade IPA: A local beer from Winston-Salem, Jade is one of the hardest beers to buy in a keg because every-bloody-one wants it! I say this because it is, sincerely, one of the best beers available and I would LOVE to have it at home in my kegerator, but unless you’re on some distributor’s good-boy list, it ain’t happening. If that isn’t a solid beer recommendation, I don’t know what is.

If those don’t float your boat (and if they don’t, I think something is wrong with your boat), there’s tons more to choose from. Get to CrossTies now, settle down in the beer garden, and go getchoo some!