One of the more recent trends in brewing is the Hazy IPA. They are ubiquitous, and they’ve become a bit of a flashpoint in the brewing industry. Lots of people LOVE to drink them. They’re juicy and delicious! But traditionalist, particularly brewers, have a hard time swallowing a beer that embraces what has been seen as a flaw for centuries of brewing – haziness.

Even in Sumerian texts about beer, one of the things found to be so amazing and miraculous about it was its clarity. Solid brewing technique should, generally, lead to sparkling, clear beer. Generations of brewers and beer enthusiasts have been taught to see haze as a defect, so it’s been a hard thing to turn away from.

Brewers that make Hazy IPAs (sometimes called New England IPAs) can use any number of tricks for that haze, but most of it comes from manipulation of already common beer ingredients: malt, yeast, and hops.

Some malts have more protein than others, so when you use wheat, rye, or spelt, sometimes you will get more cloudiness in your beer. Some yeast varieties sort of linger in the body of the beer as well. When you have little yeast arms and hands and feet floating in there, and you add hop particulate, those proteins act like glue, and the next thing you know is you have an almost opaque beer.

In the past, this was seen as sloppy brewing. But what adherents to this style found is that with those ultra-juicy American and Pacific hop varietals working with the milky mouthfeel of these hazy beers, the result is a luscious, citrusy brew that brings to mind happy memories of Orange Julius (if you’re an 80s kid, you probably remember these).

Are they good? Are they bad? You be the judge. Personally, I think if you aren’t drinking them just because they “look funny,” you’re probably also not far off from wearing black socks and sandals and yelling “GET OFF MY LAWN!” a lot. If they taste good, who cares? If you don’t want to drink them, fine. I for one am a fan and can’t wait to get more. 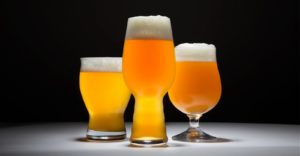