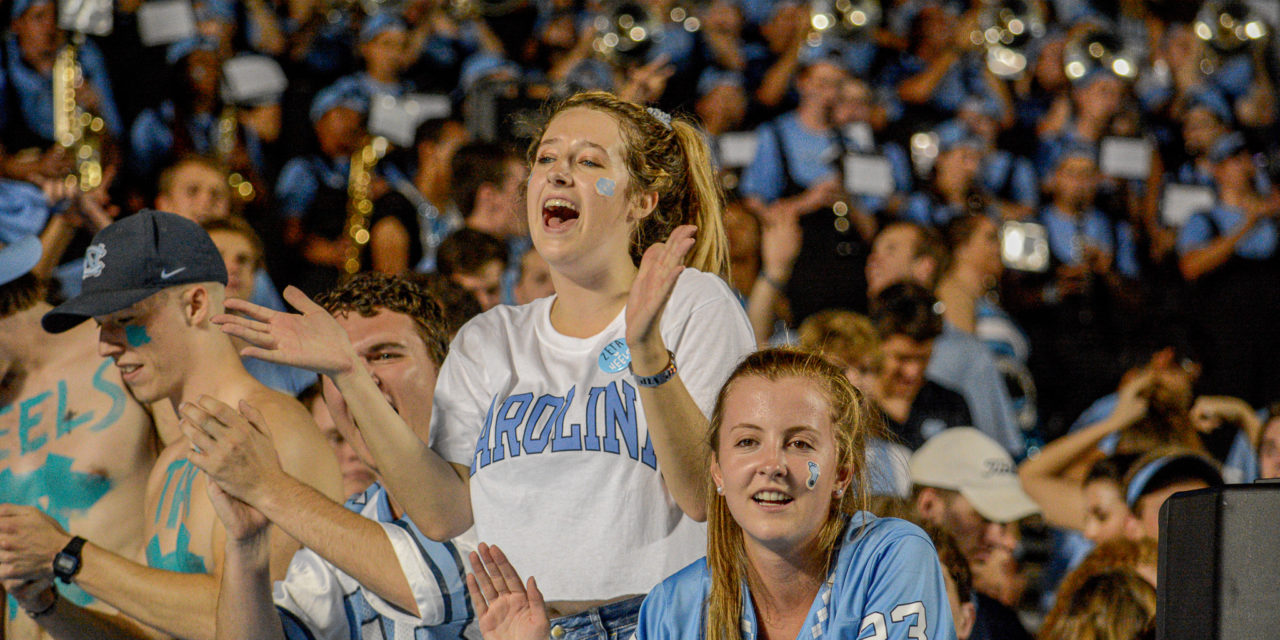 “We need to be in our seats 30 minutes early with beers in hand.”

That’s what could be heard while walking around UNC-Chapel Hill’s campus hours before Carolina took the field against Miami.

The excitement surrounding UNC football — so often overshadowed by Roy Williams and the basketball program — reached critical levels on Saturday. Fans were excited, tailgates were set up and students lined up hours beforehand to get into the sold-out game.

“This atmosphere was the best I’ve ever seen here,” Mack Brown said after the game. “It was unbelievable. Thanks to our students and our fans for coming out tonight and making a difference in this ball game.”

Fans are excited because North Carolina is finally putting an exciting product on the field. Carolina’s win over Miami moves the team to 2-0, matching UNC’s entire win total from last season.

UNC’s two wins have come at the hand — or arm — of freshman quarterback Sam Howell, a North Carolina native who has lead two fourth-quarter comebacks in two weeks. When Howell’s name was called as a starter during pregame warmups, Kenan Stadium erupted into loud cheers.

The view from the field as Sam Howell and Dazz Newsome connect for a touchdown to put UNC head 26-25 late in the game. Michael Carter then scampered for the two-point conversion to put the Tar Heels ahead 28-25. 🐏🏈 . . . . . #tarheelfootball #betheone #goheels

The fan’s excitement didn’t go unnoticed by the players.

“We love it. We love having the fans out here,” said junior defensive lineman Tomon Fox. “That is a huge part of keeping our energy up. Even when we’re down, they’re loud and our sideline is loud. They keep us up. So we really appreciate them for coming.”

Defensive lineman Aaron Crawford — who is in his fifth season in Chapel Hill — said the energy in Kenan Stadium was the best he’s ever seen.

“Absolutely the best atmosphere that I’ve seen in Kenan, hands down,” he told reporters after the game. “It was spectacular to see.  The crowd really helped the flow of the game.

“They were never down when we made mental mistakes. They stuck with us the entire time, and it was fun to be able to celebrate with them at the end.”

The atmosphere was unbelievable in Kenan Stadium last night!!! Thank you and Shout out to all of #TarHeelNation for the support and excitement last night!!! 🙏🏽🙏🏽 That is what I remember and know about Carolina Football!!! The Bar is High!!! Let’s keep it going!!! #BeTheOne

Brown’s return to Chapel Hill has brought back memories of when Carolina was a dominant team under his leadership in the 1990s. But Brown has made the effort to introduce new traditions as well.

Hours before kickoff, fans packed the field around the Morehead-Patterson Bell Tower to greet Brown and the team as they walked into the stadium. Brown himself was at the head of the pack, followed by players like Howell, offensive tackle Charlie Heck and safety Myles Dorn.

Last week, Brown also preached that fans should be in their seats 30 minutes early to cheer the team during warm-ups.

Mack Brown said everyone needs to be in their seats 30 minutes before kickoff. I’d say the fans listened. pic.twitter.com/nYngagdG2r

One aspect that likely helped with attendance was alcohol sales inside the stadium.

The aforementioned comment from before the game was not the last mention of beer and wine sales inside Kenan Stadium at tailgates leading up to the game. The lines at concession stands were long, even an hour before the game started.

It would be hard to write a better script for Brown’s return to Chapel Hill.

From the pregame walk at the Bell Tower to Howell’s late-game touchdown pass, UNC fans experienced college football like they haven’t seen in years.

Chapel Hill will always be a basketball town, but perhaps Brown is showing that football has an equal seat at the table.

Walking back from the stadium at 2 a.m., one more tradition that Brown has introduced to Carolina fans was showing itself.