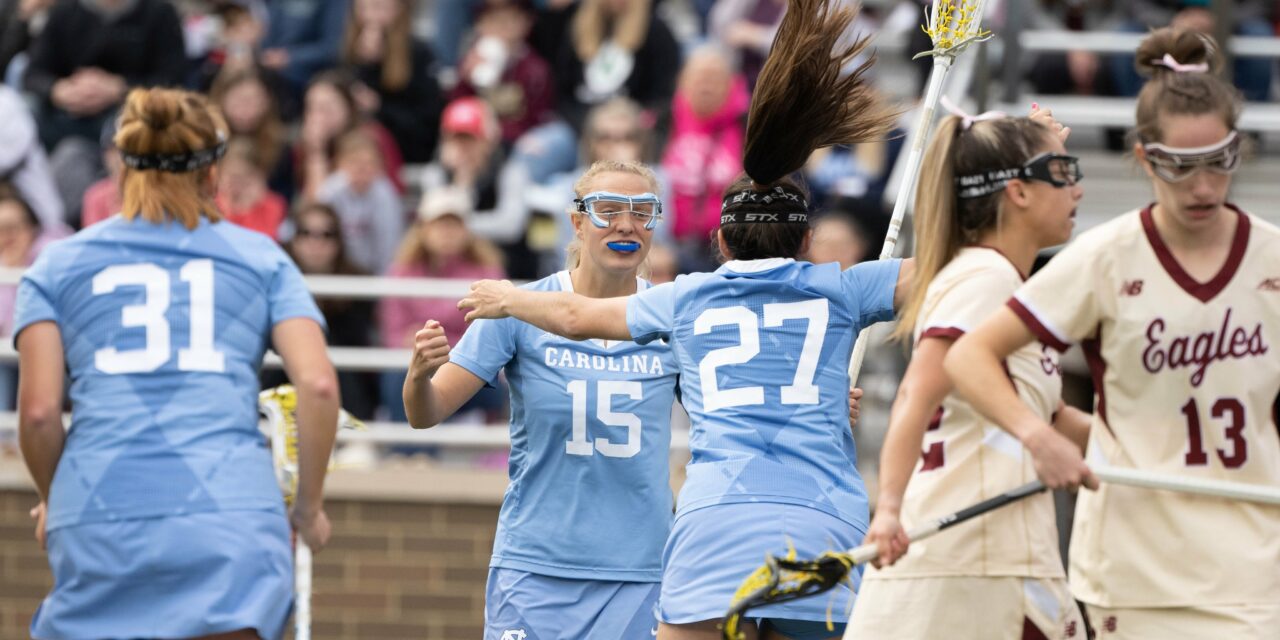 In a game that lived up to the billing, No. 2 Carolina went up to New England and staved off a furious late-game rally from No. 1 Boston College to win 16-15. With the victory, UNC earned sweet revenge for a loss to the eventual national champion Eagles in the 2021 national semifinals.

A strong second quarter keyed a 6-0 extended run which gave UNC momentum. Star attacker Jamie Ortega scored her only goal of the game to even the score at 4-4 just 32 seconds into the period, before Andie Aldave netted her second goal off a broken play to give UNC its first lead of the game. Aldave cut in front of the cage to receive a pass but fumbled the ball as she was shooting. In the scrum for the loose ball, Aldave managed to pick it up and lob it over the head of Boston College’s lunging goalie for the score.

Sam Geiersbach added two much more aesthetically pleasing goals later in the quarter, using identical spin moves near the cage to get free of an Eagle defender and score from point-blank range. Carolina led 7-4 at halftime, and Elizabeth Hillman and Olivia Dirks capped the 6-0 run with two unanswered goals to begin the third quarter. In the process, UNC held Boston College’s powerful offense scoreless for 21:05 of game time, including the entire second quarter.

The Tar Heel lead grew to 15-9 in the fourth quarter on a rocket from Ally Mastroianni. Up by a comfortable margin with 13:30 to go in the game, Carolina appeared to be in control, but the defending national champions would make them hold on for dear life before the day was done.

The Eagles sliced the lead down to four with two goals within 38 seconds. Mastroianni answered just 18 seconds later, but Boston College would not quit. The Eagles cut the lead down to 16-14 with 5:22 to go, and star attacker Charlotte North had a shot to bring the deficit down to one a minute later, but she was foiled by UNC goalie Taylor Moreno’s biggest save of the day. The Eagles added one more goal with 1:07 left, but the Carolina defense forced North to turn the ball over with 25 seconds to go, effectively sealing the thrilling victory.

In the battle of unbeatens, only Carolina emerged with its record intact, improving to 9-0 on the season while Boston College fell to 8-1. Sunday’s win is already the fifth over a ranked opponent this season for the Tar Heels. Carolina will have one final non-conference matchup Wednesday at High Point before diving fully into its ACC schedule next weekend at home against Virginia Tech.