Orange County Tornado: ‘All the Trees are Gone’ 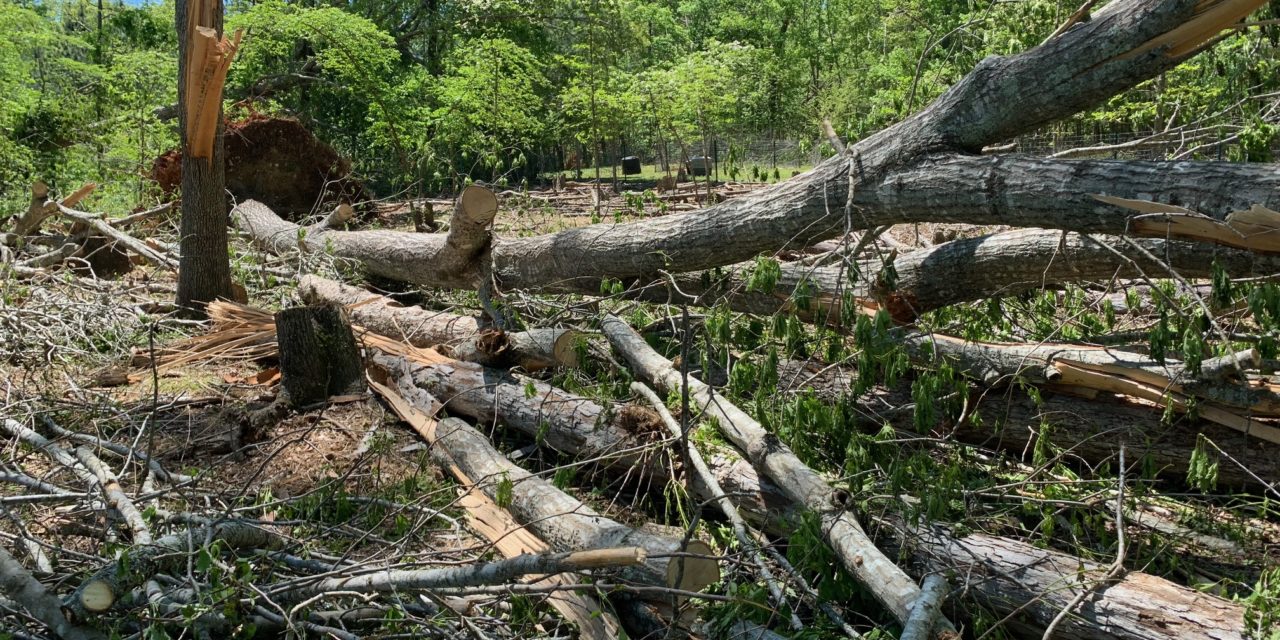 Leslie Drive is a heavily wooded road off of NC 54 in southwest Orange County that is home to a neighborhood of houses tucked away in the trees and, on Friday, it was literally ground zero for an EF-2 tornado ripping its way through Orange County.

“This has always been a very wooded neighborhood, and we lived on a heavily wooded lot. And we have more sunlight coming through right now than I have ever seen standing outside my house,” Graig Meyer said on Monday afternoon as debris removal crews were working in his yard and throughout the neighborhood.

Meyer lives on Leslie Drive and is a member of the North Carolina House of Representatives.

The sounds of chainsaws, wood chippers and some front-loader debris removal vehicles now fill the neighborhood. Meyer complimented the insurance companies and a volunteer group from Team Rubicon who was working to get the neighborhood back up and running.

Governor Roy Cooper visited the area while he was touring other damage done by the tornado in Orange County.

Meyer said he was at the airport preparing to leave for a trip when he got the call from his wife that their neighborhood was taking the brunt of the storm.

Meyer left the airport and was met by the road to his home being blocked by the trees that had fallen due to the tornado. He said he parked his vehicle and walked through the woods to his home, where he saw the devastation for himself.

“And when I finally got to our house and could kind of see what she meant,” he said, “she was right: all the trees are gone.”

Meyer said emotions came in waves, from initially being stunned by the sight, to being sad at the extent of the devastation.

“Particularly, I noticed – right where we’re standing – there’s a tree that’s gone that has held our kids’ swing for 20 years. And so, it’s that real sentimental hit of, everything has changed.”

Last week’s tornado brought devastation to Orange County. Rep. @graigmeyer said his neighborhood was hit hard by the storm. Trees were uprooted and some even crashed into houses. “Orange County will come together and take care of each other,” he said. “There’s been so much support and help already for our neighborhood, and I’m sure that’s been true for other neighborhoods as well.” (📸: Blake Hodge/WCHL)

At the end, Meyer said he was grateful that there were no serious injuries reported.

One set of neighbors was taking shelter during the tornado, when debris crashed into their home.

“And they had to climb out the back window,” Meyer said. “It’s upsetting to have your house damaged, but it’s a relief to come out of it alive. So, everybody keeps that in perspective.”

Going down Leslie Drive, there are many homes with blue tarps covering where roofs used to be. Meyer said, for the most part, his home was spared from major damage. He joked that a tree down in the goat pen at least made the goats happy for the new food supply.

Meyer said his family, along with other neighbors, had taken in those whose homes were severely damaged in the tornado. The National Weather Service on Monday confirmed the strength of the tornado that dropped on Leslie Drive as the fiercest of the tornadoes across central North Carolina Friday.

But Meyer said he was confident the community as a whole would be a source of strength for the neighborhood.

“Orange County will come together and take care of each other,” Meyer said. “There’s been so much support and help already for our neighborhood, and I’m sure that’s been true for other neighborhoods as well.”