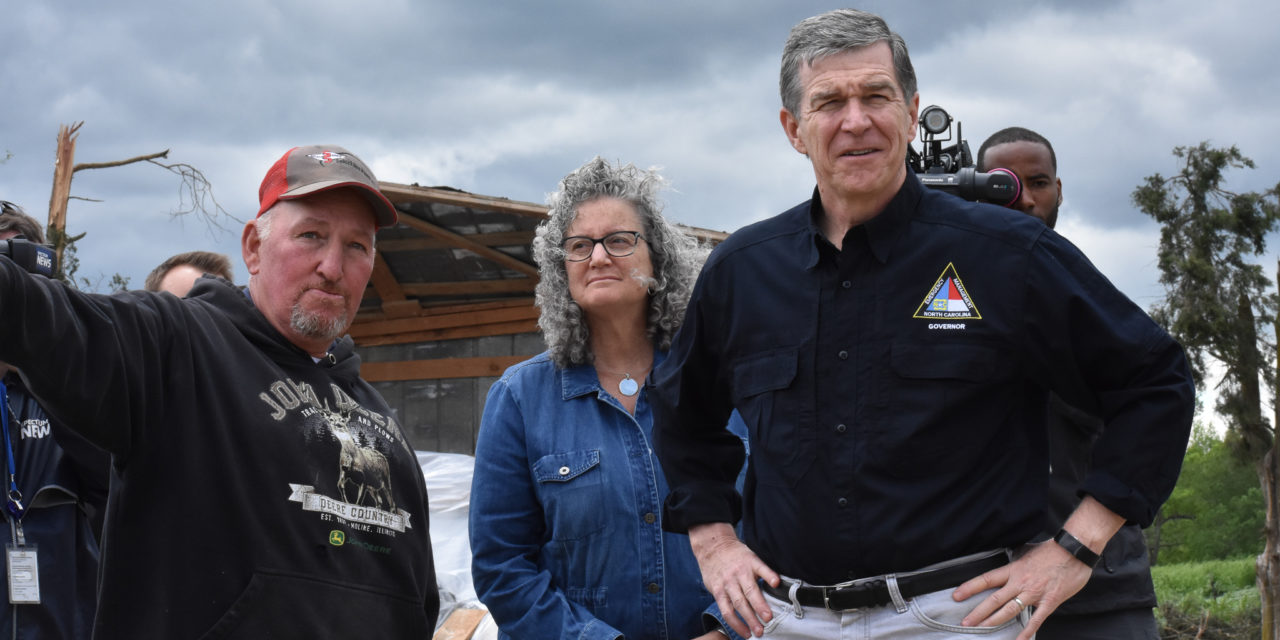 North Carolina Governor Roy Cooper stood among the wreckage at Maple View Farm in Hillsborough on Saturday and heard stories from farmers about how they sheltered as a tornado tore through their business.

“We have to be on guard more than ever before,” Cooper said. “We’ve seen some powerful storms, but we’ve experienced them right here in North Carolina.”

The tornado that formed in Orange County impacted 16 homes, according to Orange County Sheriff Charles Blackwood. It was estimated to stretch a mile and a quarter wide and traveled north from Wildcat Creek to I-85. Cooper said that at the peak of the storm there were 74,000 people without power in North Carolina.

Blackwood said the destruction caused by the tornado was like nothing he’s ever seen.

Cooper met with Orange County officials and Maple View Farms workers and surveyed the damage caused to the property in Hillsborough.

Multiple structures were destroyed by the tornado, including several cow pens, and trees were uprooted throughout the property. Owners of Maple View Farm did not have an estimate of the cost of the damage to the property nor a timetable for reconstruction.

North Carolina Governor Roy Cooper visited @mapleviewfarmicecream in Hillsborough to survey the damage after Friday’s tornado strike. . Cooper said he was grateful that no one was injured during the tornado. “It’s a time for us to be grateful,” he said. “But it’s also a time for everybody to pull together and try to get people’s lives as much back to normal as possible.” . . . . . #tornado #hillsborough #mapleview #mapleviewfarm #tornadowarning #severeweather #roycooper #northcarolina #orangecounty

This is the second tragedy to strike Maple View Farm this year.

Bob Nutter, who helped co-found Maple View Farm Ice Cream in 1963 after moving the Nutter family farming operations from Maine to Hillsborough, passed away in March at the age of 90.

Herd manager Bob Jackson walked with Cooper during his tour and showed him the building that he sheltered in as the storm tore through Orange County. Maple View Farms owner Roger Nutter, the son of Bob, said they had 20-30 people at the property already helping to pick up and assess the damage.

Cooper said that he was grateful that no one was injured during the storm.

“I know this has been a frightening time for a lot of people, but the thing that I’ve heard is the deep gratitude that no one was seriously injured,” Cooper said. “When you look at the power of this storm and how it could have caused so much devastation over a long period to have no one hurt is is a great thing.”

Cooper praised officials and first responders who helped to assess the damage after the storm. He also pointed out that neighbors and local residents took it upon themselves to clear downed trees and help in any way they could.

“North Carolinians are a determined bunch and we care about our neighbors. We’ve seen this in devastating hurricanes and floods that hit our state. Time and again, neighbors came to people’s assistance almost immediately.

“At first light today you heard chainsaws whirring and neighbors who were right there at people’s homes and businesses trying to help them dig out and clean up.”

In terms of rebuilding, Cooper said that his office is talking with emergency management to see if there are any avenues for any state or federal help for those impacted by the storm.

But for now, the governor is thankful that no was injured in the devastation.

“It’s a time for us to be grateful, but it’s also a time for everybody to pull together and try to get people’s lives as much back to normal as possible.”