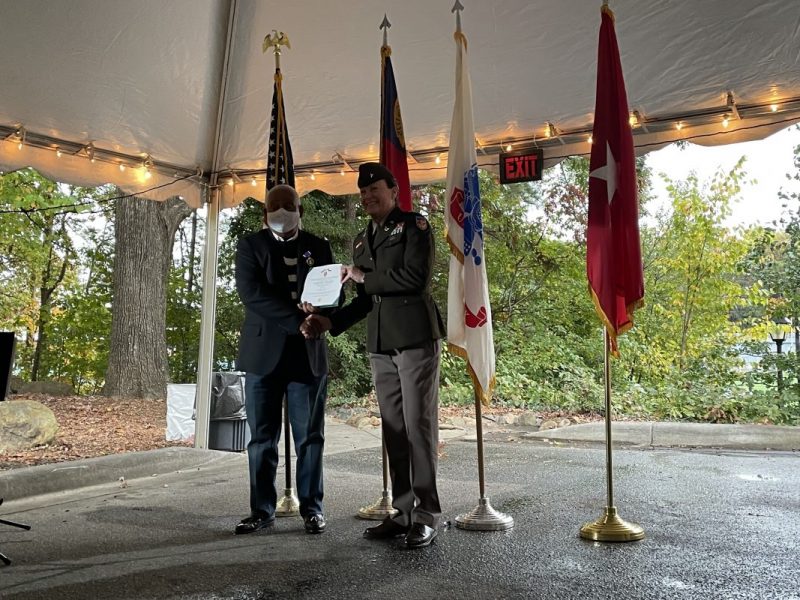 U.S. Army veteran John Spencer served in Vietnam more than 50 years ago. Unlike many other vets, however, he’s been living for decades without the benefits and awards that he deserved – one of those being a Purple Heart. A program at the UNC School of Law changed that for Spencer.

Thursday afternoon, dozens of ROTC students, law students, faculty members, and military families gathered outside the UNC School of Law to see an American hero honored with the recognition he deserves.

“I know the weather is not ideal today,” Brooker said. “It’s a little cold, but I hope the magic in the air today makes you feel warm, because it is a magical day.”

The law school held a ceremony to honor Army veteran John Spencer with his Purple Heart, a medal given to service members who were wounded or killed while in combat. Despite serving in the Vietnam War 51 years ago, Spencer was not granted his Purple Heart or any other federal benefits that come with being a veteran until now.

“Tens of thousands of North Carolinians like Mr. Spencer have been improperly or unfairly ejected from the military family because of their discharge type or characterization,” Brooker said.

Brooker directs the Military and Veterans Law Clinic within the law school. It’s a program designed to help veterans who were barred from receiving benefits from the Department of Veterans Affairs because of their discharge status.

For John Spencer, his “Other Than Honorable Discharge” was a result of minor misconduct that Brooker and UNC Law student Isabelle Stevens found to be ungrounded and heavily connected to racism against Spencer. As a young Black man in the service, he faced verbal attacks from superiors who deemed him “lazy.” He was also punished often for small infractions.

“Rightfully most of the clients that we see have been wronged and they would rightfully feel very bitter and resentful,” Stevens said. “As you see with Mr. Spencer, he showed just an immense amount of grace.”

That grace led Spencer to this moment. With his discharge status changed and his veteran status rightfully restored, John Spencer will now receive the VA medical care he lived without for 51 years. When he passes, he will be honored with a military funeral–something he’s wanted for himself and his family for years.

Now, the Purple Heart he earned so many years ago is a treasure he can hold on to for the rest of his life. Standing at the podium with tears flowing down his face, Spencer delivered emotional words of thankfulness to the crowd.

“I would like to thank Mr. John Brooker, Isabelle and all the young people that worked so hard for me,” Spencer said. “I am very grateful I got to see this in my lifetime.”

The crowd offered Spencer a standing ovation with seemingly endless applause. As the crowd began to diffuse, sounds of “The Army Song” filled the air.

John Spencer is once again a part of the military family with the honor and recognition he deserved so long ago.