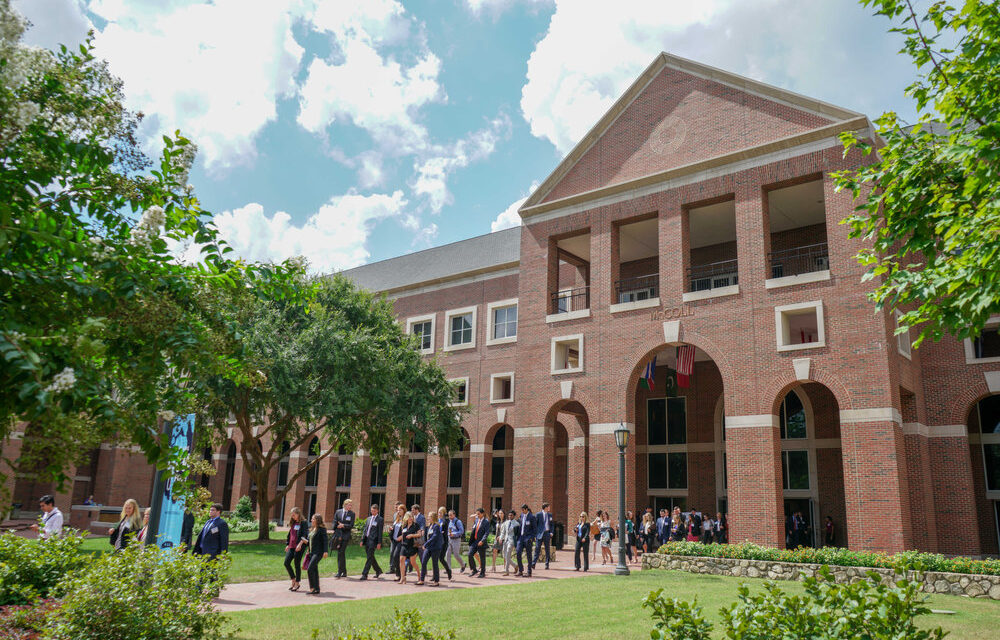 At his installation as UNC chancellor on Sunday, Kevin Guskiewicz announced new donations to the UNC Kenan-Flagler Business School that will enable its significant expansion.

Steve Bell, who graduated from UNC in 1967, has committed $25 million to support a new building for the professional school. The chairman of Bell Partners, a Greensboro-based apartment investment and management company, announced in May he’d make an $11 million gift, but has since increased his donation to bring about the expansion more quickly.

Additionally, an anonymous donor has committed to matching Bell’s gift of $25 million, said Guskiewicz. The two gifts are the largest ever made to the Kenan-Flagler Business School by individuals, according to the university.

Bell spoke to Chapelboro about his decision to increase his gift to the university.

“I love our state of North Carolina, I’m proud of our state,” he described. “I really believe we have a great long-term future. But I believe our future would be better and brighter if we could double the size of this business school.”

UNC says demand for a business degree exceeds the available space in the McColl Building, which opened in 1997. The university says Kenan-Flagler has approximately 1,000 undergraduate business, 400 master of accounting, 1,600 MBA and 70 PhD students. A new building, which would be named in Bell’s honor, could make it possible to increase enrollment in the school’s undergraduate business program by at least 50%.

Bell described an expansion like this as “long overdue.”

“They’ve only increased enrollment at Kenan-Flagler about ten percent over the last multiple decades,” he said, “and half the people that would like to go the business school are not accepted. But if we can [increase] its size, it’s a win-win for our state.”

Calling it the greatest gift of his lifetime, Bell said the decision will impact many future generations of Kenan-Flagler graduates, who he hopes will go on to innovate within North Carolina and progress the state even further. He also said he wishes his gift could inspire graduates to consider giving the university with this same philosophy.

“There are thousands and thousands of business school graduates that have benefited from that education, from those relationships they created,” said Bell. “I hope they will want to give back, not only to the university, but to [North Carolina.]”

Additional state funding is available for UNC to use for expansion of the business school if a private funding threshold is reached. According to a North Carolina General Assembly bill signed by Governor Roy Cooper in July, the state could provide $75 million in funding to enhance Kenan-Flager’s campus if an additional $75 million is raised by private funding by June 30, 2022.

UNC reports with these two gifts announced Sunday, the university has raised $58 million in private funding for the business school’s new building.