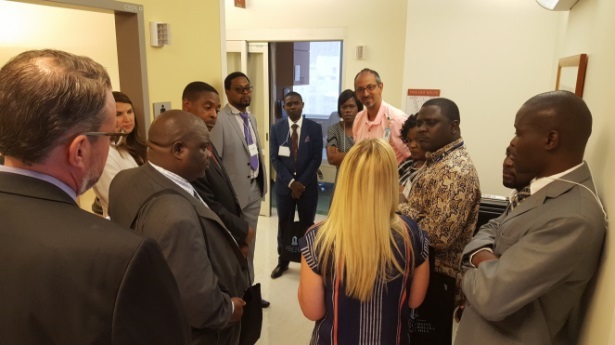 A delegation of 10 officials from Malawi’s Ministry of Health toured the North Carolina Cancer Hospital Monday afternoon, examining the facilities and hearing from doctors about the resources on-hand.

The Malawians were in town for a three-day trip prior to the opening of the country’s first cancer center. The Ministry of Health has had a long relationship with UNC, going back to 1990. The two organizations conducted joint research on HIV and STDs for many years before starting an institution together. Now, UNC-Project Malawi has over 300 university employees and works to improve the country’s health systems.

Dr. Satish Gopal is the cancer program director for UNC-Project Malawi. He’s been flying back and forth between Malawi and the U.S. for six years. He said the upcoming center dedicated solely to cancer will be a big step forward in his field.

“For a whole variety of reasons, the cancer burden is escalating,” said Gopal. “Having the appropriate facilities and care infrastructure to address that is critical. It’s a major milestone for Malawi.”

The second-in-command for the Malawian Ministry of Health, Principal Secretary Dr. Dan Namarika, was in attendance for this visit of UNC. He took time before the afternoon tour to thank the university for its long and continuing interest in his country, saying it’s a misconception that research is the sole focus of the partnership.

“Those of us that have been on the ground know that, in fact, the other areas of collaboration are even more important than the research,” said Namarika. “The University of North Carolina has supported Malawi, especially Kamuzu Central Hospital, in giving care to patients.”

“Just the number of Malawians that have been trained, the amount of care, the scientific productivity of the program, it’s really remarkable,” said Gopal. “I think we’ve facilitated some of that, and it’s exciting to be working in a new area where that wasn’t a lot of attention.”

Before he rejoined the tour, Namarika voiced his personal gratitude and connection to the university.

“I was trained as a specialist in South Africa under the sponsorship of North Carolina,” he said. “So coming here is like coming home.”

The Malawian Cancer Center is expected to open in the country’s capital city, Lilongwe, during the fall.