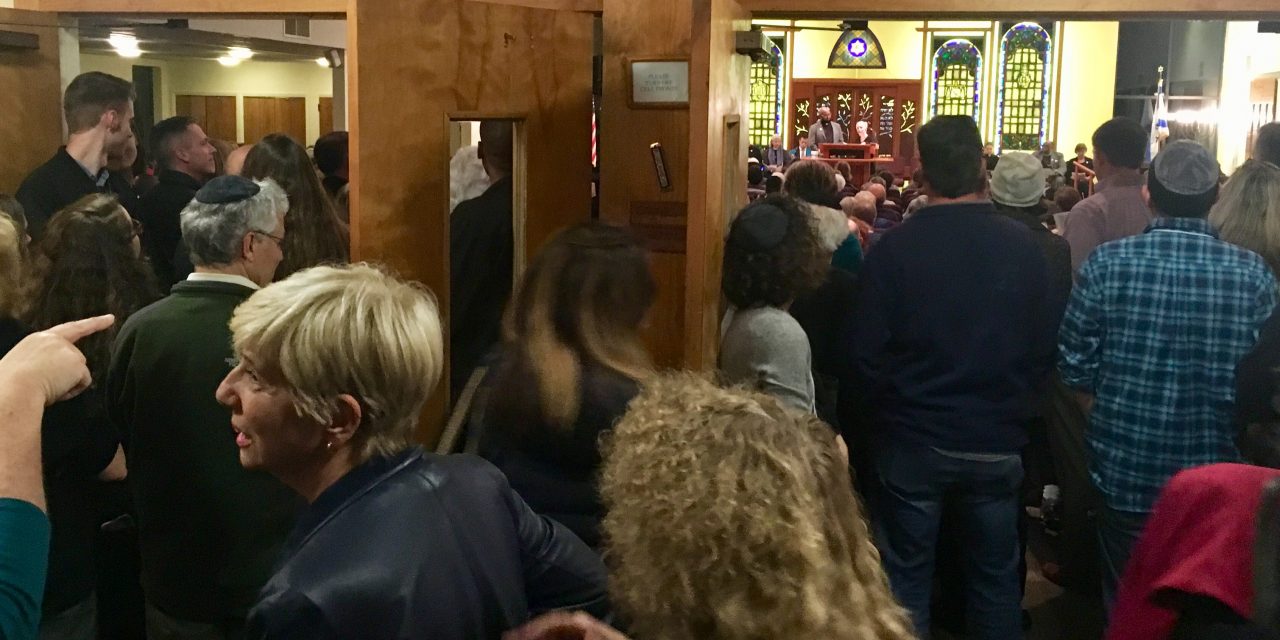 It was a quiet, cold night outside the Kehillah Synagogue on Tuesday as community members filed into seats, packed the aisles and lined the walls for a vigil remembering the victims of the shooting at Pittsburgh’s Tree of Life Synagogue last week.

The shooting drew nationwide attention to hateful and violent rhetoric shared across the internet, and its real-world consequences. The gunman, Robert Bowers, had a history of white supremacist activity online and posted anti-Semitic comments before entering into the synagogue, killing 11 congregants and wounding six. Bowers targeted the Tree of Life synagogue for its work with refugees in Pittsburgh, accusing Jews of, “bringing invaders to kill our people.”

At the vigil in Chapel Hill, with police stationed outside, community members, and local Christian, Muslim and Jewish religious leaders gave sermons and spoke about hope and resilience. Flicka Bateman, director of the Refugee Support Center in Carrboro, spoke about the work of fostering a community of acceptance in Chapel Hill, mirroring the work done by Tree of Life Synagogue.

“The Tree of Life Synagogue was targeted, in part, because of its support of refugees. Refugees ask for one thing: A place of safety, aid and comfort. Welcoming the strangers and offering safe haven are principles put forth in the Torah,” Bateman said. “I thank the congregation of the Tree of Life Synagogue for its embrace of refugees, an action for which it has paid dearly.

The event filled the main room, and attendees said they thought there might have been more than 500 people at the vigil. Speakers included Imam Abdullah Antepli of Duke University, Reverend Michael A. Cousin of St. Paul AME Church, Deacon Luis Royo and Kehillah’s Rabbi Jen Feldman.

As the service ended, many attendees took their time leaving, sticking around outside to talk with neighbors and friends.

Elaine Bolle, a member of the Board of Directors of Kehillah Synagogue and its treasurer, said the vigil’s turnout reaffirmed her faith in the goodness of people.

“Yes, this has been an outrage, and we are mourning, but we are also standing together.” she said. “We’ll move forward; we’ll create a better world for our children. This is what the best of America is all about.”

She looked around at the people leaving the temple’s interior.

In the crowd were residents Bill and Cely Chicurel, who said the vigil reflected to them the shared values of the Tree of Life Synagogue in Pittsburgh, and Chapel Hill’s own interfaith community.