The Chapel Hill Town Council approved a resolution on Monday night aimed at moving forward with plans for some development of the Greene Tract, but the move could also mean governing bodies for Carrboro and Orange County will have to hold new votes on the proposal.

Chapel Hill’s Town Council chambers were full on Monday night, a rarity for the usually quiet municipal legislative period in July and August. The Town Council called Monday’s special meeting to discuss a resolution setting early guidelines for development of the Greene Tract, which is a 164-acre property jointly owned by Carrboro, Chapel Hill and Orange County but lies entirely in Chapel Hill’s planning jurisdiction.

Members of each the Carrboro Board of Aldermen and Orange County Commissioners were present for Monday night’s meeting and encouraged the Town Council to move forward on the resolution as it was approved by those two bodies earlier this year.

“This resolution, which has no binding legal effect, identifies generally the amount of land we will commit to various uses and generally where those uses would go,” Lavelle said. “This resolution sets us all up to be able to move forward with this, for all of us to move forward with environmental impact studies and looking at density and looking at intensity and not delay us any further.”

But members of the Town Council said they were uncomfortable with certain designations in the resolution. Hongbin Gu said she opposed the plan because it gave designations of certain acreage of development without a full environmental study to know if the land could support the development. Supporters of the proposal reiterated that the resolution did not bind the council to specific numbers associated with the plans and that further proposals detailing particular projects would receive further examination. This vote, advocates said, would allow the process to move forward to determine those future plans. 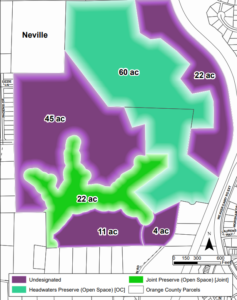 “This is a proposed future,” she said. “It’s proposed. It will change. There will be some change from the environmental impact study. But for now, we’re trying to work with our partners of Carrboro and Orange County that have already approved something.”

Councilor Donna Bell brought forward an alternative resolution Monday night that she said was aimed at being a compromise. But that process was complicated by the fact that the new resolution was aimed at making slight changes to the plan passed by the other jurisdictions while still satisfying the concerns of Chapel Hill Town Council members. The haggling over the final wording of that resolution lasted for roughly an hour after nearly 30 members of the public had addressed the council during public comment.

Ultimately, the council voted 7-2 to approve a resolution that closely follows what was passed by Carrboro and Orange County earlier this year. But instead of designating certain areas of the Greene Tract for certain developments – including residential, mixed-use, a school site and public recreational facility site – the map approved by Chapel Hill leaves the entire area undesignated of a specific use. The only pieces set aside for a certain purpose in the plan approved Monday night are 82 acres that will be preserved. The resolution approved Monday also strikes 22 acres of potential housing from the initial resolution. Hongbin Gu and Nancy Oates were the two dissenting votes Monday night. Oates said she felt as though Monday’s resolution represented a master plan that she wasn’t comfortable with because it designated certain acreage amounts for certain projects.

Some changes have already occurred since the resolution passed by Carrboro and Orange County this spring. Chair of the Chapel Hill – Carrboro City Schools Board of Education Joal Hall Broun told the Town Council on Monday night that the school’s needs could exceed the 11 acres currently shown as a possible school site.

Chapel Hill communications officials said after Monday night’s meeting that a copy of the adopted resolution will be provided to Carrboro and Orange County and that staffs from each jurisdiction would work on next steps. Further action could be needed by Carrboro and Orange County elected officials to align all aspects of Monday night’s vote. Neither of those bodies is scheduled to meet before the fall.