Romaine Announces Run for Carrboro Board of Aldermen 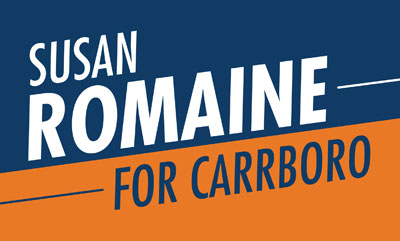 Susan Romaine has announced she will run for a seat on the Carrboro Board of Aldermen this fall.

Romaine is the first candidate who has announced a run for the board. Incumbents Damon Seils and Sammy Slade hold seats that will be up for election in November, but the two have not signaled whether they will be running.

Alderwoman Bethany Chaney announced last month that she would not be seeking re-election.

Romaine said she is making the announcement during National Volunteer’s Week, “as public service is a natural progression in my many years of community involvement through PORCH, Orange County Living Wage, and Orange County Democratic Party.”

Romaine said her campaign will focus on prioritizing affordability “through more entry-level housing and living wages,” broadening the town’s commercial tax base, preserving Bolin Creek Forest and “celebrating and fostering diversity and equity” through various avenues.

“Over the past 15 years that our family has lived in Lake Hogan Farms, I’ve seen Carrboro’s small-town charm and rich diversity increasingly bump up against more density and less affordability,” Romaine said in her announcement. “While we can’t stop market forces at work, I look forward to adding my voice to the debate on ways to cushion the effects of growth and gentrification on Carrboro’s small business community and low- and moderate-income families.”

The mayor’s seat is also up for election, along with the three seats on the board. Candidate filing for the seats will begin in July before November’s election.