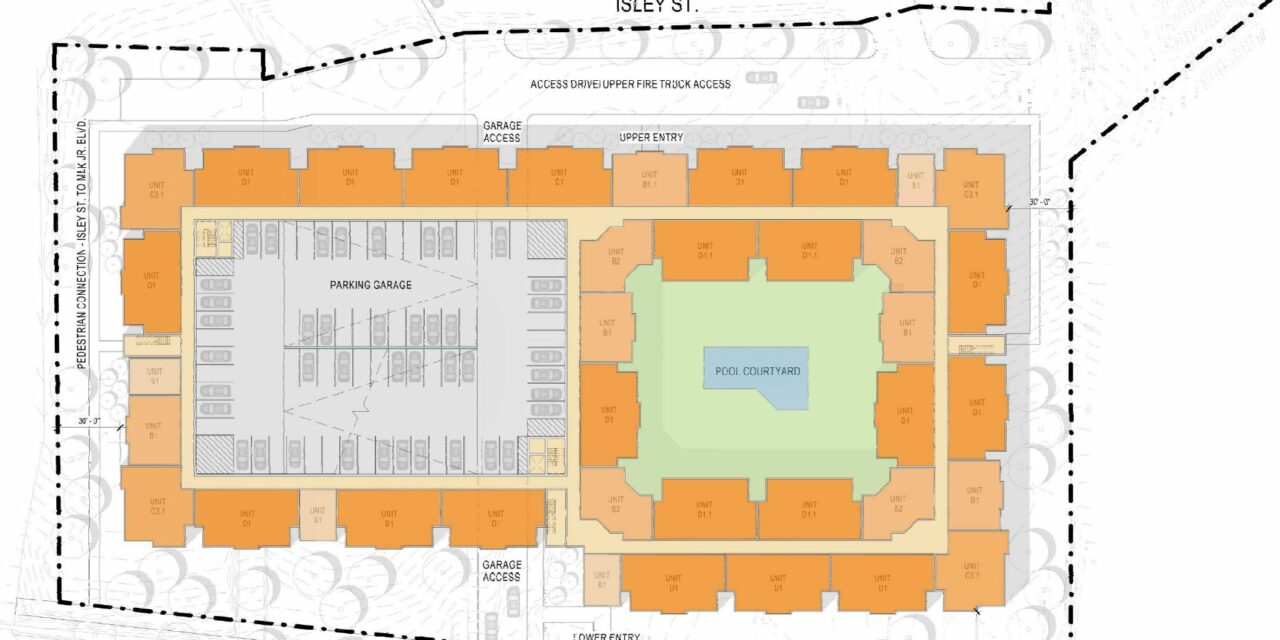 “The Flats” complex would replace aging, low-density housing with high-density housing as envisioned by the Town of Chapel Hill’s recently-adopted Future Land Use Map. If approved by the town, The Flats would comprise of approximately 200 units and 600-650 total beds.

Jeff Davis, of JDavis Architects, said the terrain of the Isley Street side of the property led to some challenges in design of the complex.

“The biggest challenge on this side is the topography side just diagonally from the lowest north-east corner to the south-west corner there’s a 32-foot change in grade,” Davis said.

Davis said the project is set to include an approximately 450-space parking deck which will be surrounded by residential units, a clubhouse, pool, courtyard and a pedestrian path through the site.

“All parking in the development is in the parking deck,” Davis said. “There’s no surface parking anywhere. Visitors, and residents and future residents will all park in the deck.”

Bruce Ballentine is the founding principal for Ballentine Associates which is part of The Flats project. He said the project team is working to explore options to provide an affordable housing plan.

“We’ve also started discussions with UNC to see if there is a way that it might be possible for this project to assist with the certain students that are on assistance that might marry up with an affordable housing solution,” Ballentine said.

The Chapel Hill Town Council heard the concept plan for The Flats at their meeting March 24. Some concerns the council shared was the scale of the project and the potential disruption of the nearby neighborhoods.

“It’s just missing the mark on all those,” Ryan said. “We’ve talked about the idea of trying to grow our downtown out of its little constrained linear format right now, and there’s a big opportunity cost for the town to let that valuable land go to student housing complexes.”

“This would be one of the corridors we would want it on, but I’m in agreement that this project is just so large on this property and backs up to a neighborhood, but there’s also a townhouse neighborhood on the other side and our affordable housing senior neighborhood on the other side,” said Hemminger. “I don’t know if you’ve had conversations with them but we need something that works with them and I am not convinced that a student housing project of this size and scale [does.]”

If the project is set to continue, Hemminger and the Chapel Hill Town Council said the project team has more work left to do before earning town support.

Additional development plans for The Flats can be found here.