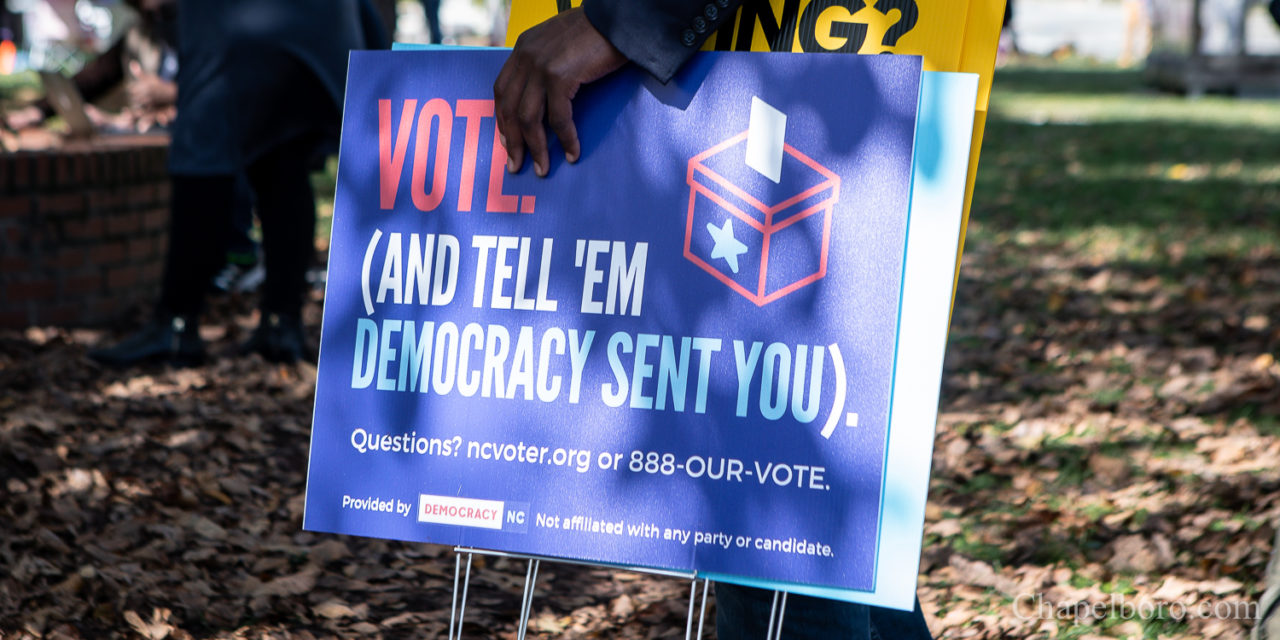 On a sunny Sunday afternoon in Carrboro, members of the Chapel Hill-Carrboro NAACP Religious Affairs Committee gathered at the Town Hall to promote early voting with their annual Souls to the Polls event.

Over a hundred voters waiting in line watched and listened as speakers preached the importance of early voting. Dr. Rodney Coleman was among those speakers and he reflected on how voting is how citizens express their voices.

“When I think about the premise and the theme of this wonderful event and the initiatives that have gone into what we now celebrate as Souls to the Polls, I can’t help but think about the importance of one’s voice,” said Coleman. “For when we all vote, it is our vote that becomes our voice. Our vote is indeed our voice that not only ensures the promotion of our freedoms, but the protection of those freedoms. And we’ve come today to celebrate Souls to the Polls and the exercising of our voice.”

Multi-musician, songwriter and producer Kelsey Warren from Blak Emoji said he plans to travel to other states to encourage other residents to vote. In addition, he’s pushing his friends in the musical scene to campaign as well.

“I’m telling my friend in Texas to campaign, a friend in Kentucky to do the same thing,” Warren said. “Because it’s like, look, I’m small potatoes, I’m not John Legend, but I have a voice. But that’s the thing. That’s my point is that all of us have a voice. It doesn’t matter how much money you have. It doesn’t matter if you’re famous or not. What matters is that you’re an American citizen.”

The @CHCNAACP is holding an event at the Carrboro Town Hall urging people to get out and vote.

The line here nearly 100 people deep, but organizers just said the line at Chapel of the Cross on Franklin Street is much shorter.#VOTE pic.twitter.com/71JMnwbO9N

While the wait at Carrboro Town Hall was around an hour, that is not the case for other voting sites across the country. The Associated Press reported that lines in Georgia, Texas, and elsewhere in North Carolina have featured hourslong wait times. Delays were due to insufficient resources to handle the large surge to the polls, something advocates argue is a form of voter suppression.

“I know that in certain places — and I’m sorry to say in Georgia and Florida — it’s not fair at all,” Warren said.

Anna Richards, the president of the Chapel Hill-Carrboro NACCP, said the chapter was thrilled at the turnout to early vote on a Sunday afternoon.

“I think what it means that people are wanting to participate,” she said. “They want to have their voices heard and the best way to do that is by voting. And so the turnout has been great every day since the first day of early voting.”

Richards said the annual Souls to the Polls event was born out of a need to get people — especially those in the Black community — to voting sites.

“One of the early battles for voting was to get access to the polls on the weekends when people were not working nine to five during the week.”

As such, churches and religious leaders would gather to support their communities during the voting period. In addition, the event would act as a safeguard for those worried about violence.

“That’s where it comes from, really from the courageous religious leaders who would come as a group to help support each other and in the beginning to protect each other from violence that might come when people tried to vote,” Richards said. “So it’s a tradition that goes back to the early days of the civil rights movement.”

As of Monday morning, the Orange County Board of Elections is reporting that nearly 14,000 people in the county have voted early. Across North Carolina, over 900,000 residents have cast early ballots.

Early voting sites across Orange County and North Carolina have been open since Thursday. Find more information about early voting in Orange and Chatham County — including health and safety precautions being taken — on our website.