Chansky’s Notebook: Man Of The ACC 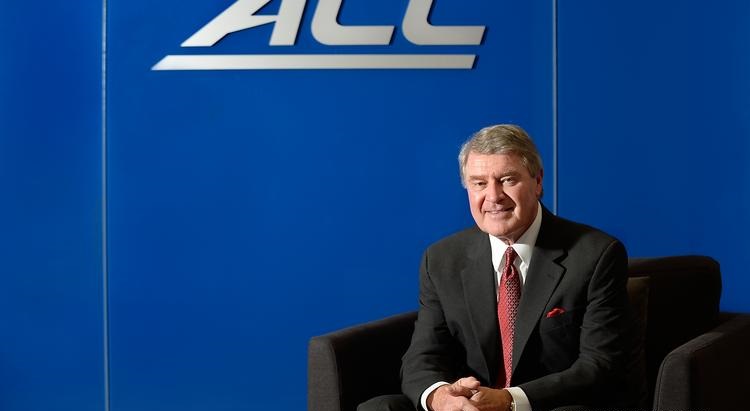 John Swofford was the right man at the right time for the ACC.

When the former Carolina athletic director took over as commissioner of the ACC in 1997, he was 48 years old, and before him the league bosses were all caretakers of a basketball-rich conference, with the exception of Gene Corrigan.

Swofford followed Corrigan’s vision of expanding the ACC with Florida State, and while his moves to build the league to 14 schools in football, 15 in basketball, were at times controversial, the former football quarterback at UNC tossed a few home run balls.

The addition of Virginia Tech was forced on him but proved one of his wisest after the Hokies turned from a regional program to a national power. Swofford finished breaking up the old Big East when he stole Miami, Syracuse and Boston College and eventually Pitt to form the Atlantic and Coastal Divisions in football.

Notre Dame had flirted with the Big Ten for years but wanted to remain an independent in football to keep its lucrative home-game contract with the NBC. Swofford made it work by getting the Fighting Irish to play five ACC teams each season, further boosting the league’s gridiron cache and helping gate and TV revenue significantly.

While the ACC rose to prominence in football and maintained its dominance in basketball, TV contracts with ESPN increased the annual per-school revenue, and if Swofford’s creation of the ACC Network proves fiscally successful the conference will inch closer to the $50 million a year payouts the Big Ten and SEC make to their members.

Swofford’s eventual 25 years as commissioner came during the TV sports boom in America, and he had to make some gutsy moves to keep pace. The league is now considered the best balanced in collegiate sports between the revenue generators and its dominant Olympic sports programs.

Spending his college career as an athlete and administrator in the ACC, Swofford’s appointment was opposed only by a few schools that didn’t want a Carolina guy. Turned out the joke was on them.