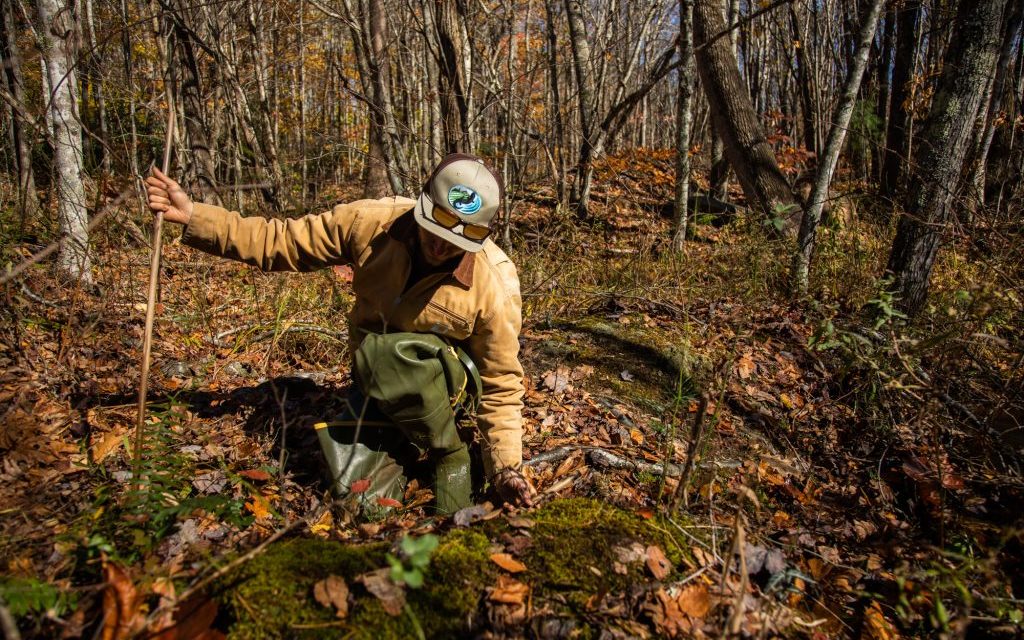 Trudging through the thorny brush, Mike Knoerr is on a quest.

Thunk. Thunk.  Two five-foot long wooden dowels, the width of a pool stick, are in each of his hands. Methodically, he pokes them into the mud, waiting to hear the unique thud of wood touching shell.

Thunk. He moves farther into the bog owned by The Nature Conservancy, an area he knows well. For years, he and other biologists have scouted this three-acre property, watching, monitoring. Learning.

Knoerr, a Virginia Tech biologist, is looking for bog turtles. Measuring at most five inches long, the bog turtle is the smallest and one of the rarest turtles in North America.

For a species that’s been studied as long as it has, he jokes, there should be a more high-tech way to find the turtles than poking around in the mud. But for now, it’s just Knoerr, his sticks, and a bog teeming with ecological significance.

Bog turtles are a federally threatened species and are considered critically endangered by the International Union for the Conservation of Nature — the same classification as the black rhinoceros.

The bog turtle, marked by a small yellow dot on either side of its head, is the smallest in North America. But why should anyone care about a tiny turtle that spends the bulk of its time buried in the mud?

“This animal has evolved with the Southern Appalachian landscape as we know it,” said Gabby Lynch, the director of protection for the Tennessee chapter of the Nature Conservancy. “They are quite literally here as a remnant of the Ice Age, a relic of this era that has changed and evolved as our region evolved.”

Bog turtles live in mountain bogs, a rare ecosystem only found in select locations nestled in the Appalachian Mountains. Historically, mountain bogs have been kept open and free of most trees by grazers, be it mastodon elephants during the Ice Age or more recently, bison or elk. Now, the duty often falls on biologists.

Every rare species faces challenges to its survival. But bog turtles are being hit by obstacles left and right, said Gabrielle Graeter, a conservation biologist with the North Carolina Wildlife Resources Commission.

Because mountain bogs are open areas close to streams, early settlers would drain and ditch the wetlands to create farmland, destroying the slow flow of water the bog turtles need to survive. As the region modernized, roads were built through and around the bogs: nowadays, death by car is common for turtles, Knoerr said.

Thousands of years ago, a wandering bog turtle wasn’t a problem: a different wetland could be found nearby. But as the ecosystem became rarer, a straggling turtle was less lucky. Today, a turtle must travel further, through a gauntlet of predators such as raccoons and skunks, to find an adequate habitat.

“Our challenge becomes how to fight these all at once with our limited resources and funding,” Graeter said.

The prodding-in-mud-with-a-stick method is proving unsuccessful. Knoerr stops at a moss-covered rock nestled under a tree where two small streams converge.

Under the rock, he explains, is where a group of bog turtles return to hibernate for the winter. The species’ impeccable spatial memory brings them back to the rock when the weather gets cold. Here, they’ll bury themselves deep in the mud. Waiting for spring, for nesting. Growth.

Knoerr has abandoned the poles. He takes off his jacket, stretches his arms above his head and lies face-down in the mud. 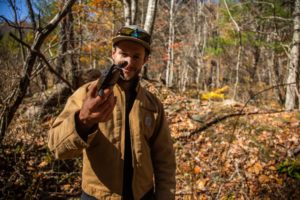 Mike Knoerr examines a female bog turtle found in an area owned by the Nature Conservancy.

He reaches his arm deep into the crevasse, up to his shoulder. There’s a grunt. A grin. Slowly, he pulls his arm back out, this time dripping with mud. In his hand is a bog turtle.

Knoerr knows this bog turtle well — he’s tracked her over the years, watching as she nested, watching as her eggs hatched.

Biologists mark each turtle found in the bog with notches along the outside of the shell to identify each animal over time. Clocking in just over 170 grams, or about six ounces, this female is one of the biggest bog turtles on record.

Knoerr isn’t the only one looking for bog turtles. Poachers are on the hunt, too.

Bog turtle populations have been lost to unscrupulous collectors who enter the bogs, find the turtles and sell them to the pet trade, Knoerr said. The final price depends on the market, but bog turtles can sell for thousands of dollars to the final buyer.

If the adult population of bog turtles is removed from its habitat, the effects are devastating. Unlike deer, rabbits or mosquitoes, which reproduce quickly in their short lifespans, the bog turtle is long-lived and has relatively low reproductive outputs. This evolutionary strategy depends upon adults surviving a long time.

When poachers come into a system and remove the breeding turtles — that have taken seven to 10 years to reach sexual maturity and may be over 60 years old — the population is wiped out in a matter of days. And it isn’t likely to recover.

“Poaching is a killer threat to the species as a whole,” Lynch said. “There are lots of people who believe that bog turtles shouldn’t be written about at all. If people know about them, they may come after them.”

To combat inadvertent turtle snatching, conservation groups keep the locations of bogs hidden. A network of trusted volunteers living near the bogs alert staff if unusual activity occurs. If a visitor is brought to a bog and wants to take photographs, cell phones must be placed in airplane mode to ensure the phone’s camera does not track location in the image information.

“Poaching, combined with all those other stressors, it’s just a one-two punch so we’ve lost sites in really small windows of time,” Knoerr said. “In some cases, they’ve never really recovered, unless you do intensive land management. That’s kind of why we’re here doing what we do.”

Statewide conservation efforts are attempting to slow the decline of bog turtle populations.

Some solutions are relatively simple — take, for example, the electric fences installed to keep skunks and raccoons from eating baby bog turtles at nesting sites.

At the bog Knoerr monitors for The Nature Conservancy, fences were erected around the core nesting areas two years ago. Before, skunks had eaten all but one bog turtle egg. This summer, Knoerr counted the 100th baby bog turtle to survive the hatching period thanks to the protection offered from predators.

“This kind of conservation is somewhat novel,” Knoerr said. “We’ve had to be really creative in developing partnerships with different entities in order to do it. We can’t just leverage one funding source because it’s just not enough to hire people to be out there finding bog turtles and serving sites, doing habitat management and population level management.”

Private landowners own the majority of bog turtle habitats. Conservation easements, which are voluntary land preservation agreements between a landowner and an agency or conservation group that limit the amount and type of development possible on an identified parcel of land, as per the U.S. Fish and Wildlife Service definition, provide a channel for private land acquisition.

The U.S. Department of Agriculture offers funding through the Farm Bill for landowners who choose to preserve their property. In North Carolina, groups including the Nature Conservancy, Blue Ridge Conservancy, Conserving Carolina and Catawba Lands Conservancy work to facilitate private land acquisition through outright acquisition of bog habitat and easements.

The turtle squirms as Knoerr takes her measurements. Weight. Length. Estimated Age. Coordinates where she was found.

Then it’s back through the bog, past the brambles, across the creek. There’s a chill in crisp air. Along the narrow stream channels, a light dusting of snow tops the fallen leaves.

Once more, Knoerr takes off his jacket, lowers himself to the group and reaches deep into the mud. The bog turtle slides back into the hole, ready to wait out the winter with several of the other bog turtles who call this place home.

No one knows what the bog will look like in 10, 20, 30 years. Will this turtle live to see her babies grow to maturity? Will the juvenile bog turtles breed and repopulate the wetland? Will the bog remain viable, with the ever-present threats of development, inflated rates of predation and climate change?

Teetering on the brink of permanent decline, it’s hard to say what will happen to these tiny turtles or the precarious mountain bog ecosystem. Knoerr hopes conservation efforts pay off. Until then, he’ll keep waiting. Watching.

Working to protect the species for years to come.