Troubled Water: Why the World’s Oldest Wetland Trees Aren’t in a State Park 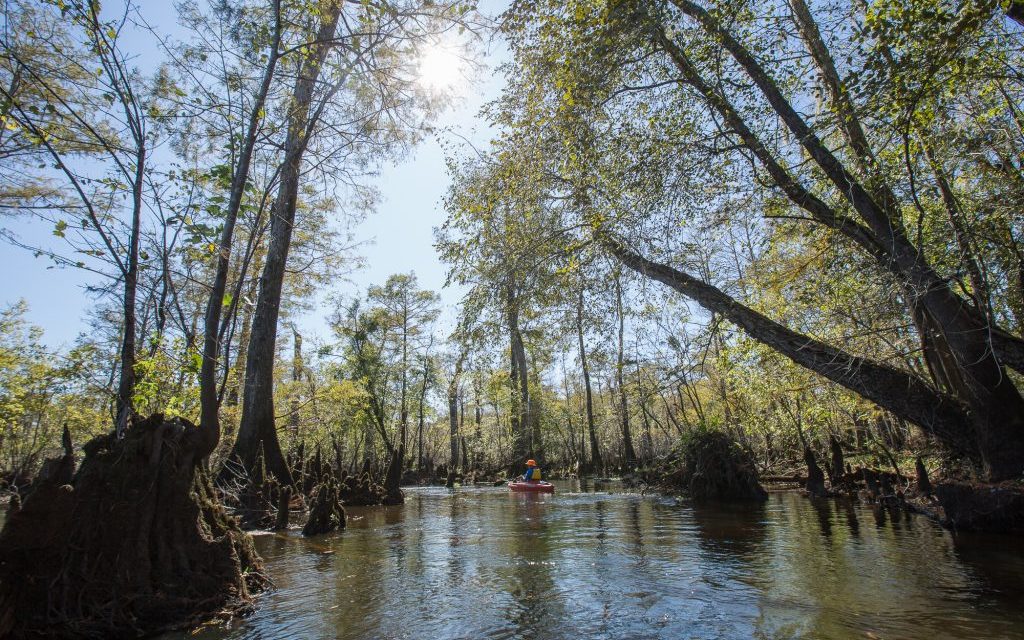 A century ago, a riverboat captain traveling down the Black River to trade goods in Wilmington would do anything possible to avoid getting tangled in the knotted burls and fallen limbs of the Three Sisters Swamp. Today, the swamp is one of the river’s greatest draws — and one of the world’s most ancient natural sites.

When the water levels are just right, a kayak can squeeze through the swamp’s winding channels into a grove of bald cypress trees dating back thousands of years.

When they were first discovered in 1985, they instantly became the oldest-known wetland trees in the world. The oldest-known tree today, as published in a May report, is at least 2,624 years old.

The river holds its own history for residents of nearby Ivanhoe, a 264-person town which sits halfway between Fayetteville and Wilmington. For 59-year-old Chris Barnhill, it’s been everything from a place to splash and swim around with childhood friends to a bathing spot to recover from hard days of work farming. Today, it’s a visible symbol connecting him with the Barnhills who’ve lived on its shores for four generations.

“It’s been a place for everybody: A place to go, hang out, meet, picnic,” he said. “It’s just been a wonderful asset to the community, and everybody’s enjoyed it forever.”

It’s exactly the kind of place you might expect to be made into a state park. North Carolina’s legislature moved to do just that two years ago with HB 353, a bill that would have established the Black River State Park alongside three less-developed natural areas.

The proposal seemed like a no-brainer: The world’s oldest wetland trees would be protected by the state government, and North Carolinians would have increased access to one of the most unique and beautiful places in the world.

The bill was filed in the state House on March 14, 2017. It was approved by the House three weeks later on April 6 and was referred to the Senate later that day.

Everything seemed smooth, except for one thing: Nobody living along the river knew there was any proposal at all. 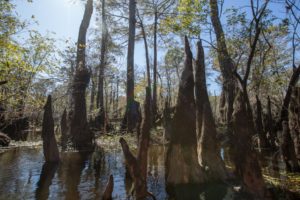 Paul Turlington was the first Ivanhoe resident to hear about HB 353, and even he didn’t know about it until after it had passed in the state House. He thinks he wouldn’t have heard about the Black River State Park proposal until it was passed into law if not for a phone call from a concerned staffer at The Nature Conservancy, a national nonprofit which owned most of the riverfront land south of the swamp.

“Her quote was, ‘You are probably going to be pissed as hell,’” he said.

The Conservancy was generally in favor of the plan, the staffer told him, but she felt like local residents deserved better than to be left out of the process entirely. She described a potential state park Turlington felt would bring both the swamp and the residents of nearby Ivanhoe more visitors than they could handle. Worst of all, it would have caught residents of the small farming community by surprise.

Turlington’s first instinct after hearing about the proposal was to call the state park system and ask whether a park proposal could legally be passed without public input. Each time, he was told to talk to somebody else. On the fourth call, he referenced HB 353 by name.

He heard back from park service top brass within 45 minutes. In a series of “panicked” calls, park officials reassured him that a state park on the river was in their best interest. Like other residents, he doubted whether state ownership and management would really be a step up from preservation by The Nature Conservancy and local residents. People like Carlton Henry, who owns a widely-used access ramp to the river, worried that opening up easier access points would attract less experienced — and less respectful — visitors to the water.

“It’s not just going to be, as I say, a tree hugger with sandals driving a Kia,” Henry said. “Those people won’t leave a footprint, but other people, whatever they use is what they’re going to leave.”

Others worried that an influx of visitors to such an undeveloped area would burden local residents, many of whom were often called upon to help visitors. Donna Sykes said she’d provided many ill-prepared “day trippers” with food, directions and gas. While she’d never minded giving such help on a small scale, she feared the park’s estimated number of visitors would overwhelm her small farming community.

“We are not against anybody seeing the trees, visiting the river, visiting the area,” Sykes said. “We just don’t have infrastructure — the roads, bridges, the EMS, anything like that — that can take on 60,000 people a year.”

None of the Ivanhoe residents interviewed said they were against having visitors on the Black River. All of them had questions and concerns, though, and they worried about what it meant that the park system hadn’t even given them a chance to ask.

“They knew we would be against it,” Henry said. “They knew what they were doing wasn’t what should have been done. Nobody likes a sneak.”

The Nature Conservancy arranged to hold a meeting at the Rowan Fire Department in Ivanhoe to address community concerns around the park on May 2, later inviting state park officials. The meeting was ostensibly designed as a place for residents to voice their concerns about a transformative project in their backyards.

For most attendees, though, it felt like park officials were trying to convince them that the park was a good idea rather than asking them if they wanted it in the first place.

“It felt like a used vacuum cleaner salesman trying to sell you something you didn’t really need,” Barnhill said.

Turlington said the plan presented at the public meeting didn’t match up with the one he’d heard laid out during his initial phone calls with park officials. When someone asked Deputy Park Director Carol Tingley about a controversial proposal to build walkways into the ancient swamp, for example, Turlington said she denied ever having brought it up.

Changing plans aside, attendees felt their original concerns were still valid. Park officials tried to set their minds at ease by drawing comparisons to successful parks elsewhere in the state. They also assured landowners that no land would be purchased by unwilling sellers and that safety concerns would be handled by park rangers.

“I think in many ways the idea of what the park is going to be is a little larger in your mind than what’s really going to happen,” Tingley was quoted as saying in The Sampson Independent. “It’s going to take years for us to build anything.”

Intentionally or not, these words sent a clear message to people like Paul Turlington: The park was coming, whether they liked it or not. 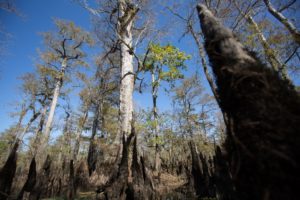 “There were no ifs, ands or buts,” Turlington said. “There was, ‘This is what’s going to happen, and you’ll like it.’”

Many residents left that meeting more determined than ever to fight the state park proposal. Turlington contacted the area’s representatives, William D. Brisson and Brent Jackson, to lobby against it. Donna Sykes started an online petition against the park that garnered over 1,000 signatures.

“I made it my personal mission to stop it,” Sykes said. “I mean, this is my home.”

The park system took a step back. The version of HB 353 that was eventually signed into law by Gov. Roy Cooper took the Black River State Park off the table, instead requiring park officials to study “the feasibility and the desirability of acquiring land and establishing a State Park” in the first place. The other three natural areas would be established as planned.

At three public meetings in the river-adjacent Bladen, Pender and Sampson Counties, park officials presented their new vision of a “node-based” park built in small sections along the river. Polls conducted at these meetings indicated that 48 percent of attendees supported a state park in some form, and later online polls showed that around 75 percent of respondents statewide were in favor. Most favored lower-impact developments like picnic areas, educational signs and primitive camping sites.

Ivanhoe residents still had their doubts. The meetings had again felt more like sales pitches than community discussions, and many residents worried that the state’s voting system showed an inflated level of support for the park.

An additional meeting back at the Rowan Fire Department was held on Nov. 16 to address these concerns. Attendees said park officials like Tingley arrived with many of the same graphics and talking points from previous meetings.

“Everybody was fit to be tied,” he said. “If she thinks she helped her cause that night, she didn’t.”

The Black River State Park feasibility study was submitted to the North Carolina General Assembly on Mar. 1, 2018, almost one year after HB 353 was originally filed. The report found that the area clearly met the basic criteria for a state park and again noted that such a park could be built in pockets bought from willing sellers.

Any plans to build such a park immediately, however, were dead in the water.

For Turlington, the release of the report was the end of a “months-long nightmare.” His ultimate goal had been to keep things more or less as they were, with the land “permanently preserved” and owned by The Nature Conservancy and local residents.

“It was just a planned bureaucratic growth,” he said. “The whole thing stunk to high heaven.”

The N.C. State Parks system was contacted two times in reporting this story. While they declined to comment on specifics of the 2017 proposal, officials repeatedly emphasized that any future proposal would have to be started by local residents in order to move forward.

“We have already had a few false starts where people somehow think this proposal is being resurrected, and it just isn’t,” Tingley said in a phone interview. “There’s no reason for people to think that we are still pondering and strategizing up here, because that is just not happening.” 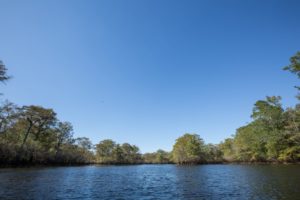 Residents like Turlington said they would have opposed a park proposal regardless of when and how it was presented to the public. Even those with less strong feelings, like Chris Barnhill, agreed that keeping HB 353 a secret for so long meant the whole process was dead in the water from the start.

“I think if they’d have pursued it in the manner they did later in the process, they might would’ve stood a chance,” Barnhill said.

For now, at least, the town, the river and the trees will remain exactly as they have for hundreds of years: ancient, silent and at peace.