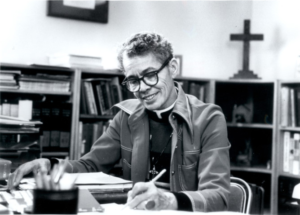 Do you know someone who works tirelessly for human rights in Orange County? Someone deserving of recognition and praise? If so, why not nominate them for the Pauli Murray Award?

For 28 years, the Human Relations Commission has been brought the community together to celebrate our members who serve with distinction in the pursuit of equality, justice, and human rights for all residents. We continue this tradition February 24, 2019 when we gather for the 29th Pauli Murray Awards event — and you have the opportunity to help decide the award winners! Nominees are in three categories: youth, adult and business leader — and are due January 4. You can download nomination materials at this link.

In addition, the HRC is hosting an essay contest for middle-school and high-school students (with cash prizes), which asks students to reflect on Murray’s work and how her values and advocacy apply to their lives today.

Although Anna Pauline Murray isn’t as well-known as many other American civil rights leaders, it is not for lack of accomplishments or legacy. This activist, priest, lawyer and theorist consistently fought for the rights of both African-Americans and women — and coined the phrase “Jane Crow” to highlight how women faced discriminatory laws similar to the Jim Crow laws Blacks faced. She was the first African American to earn a law degree from Yale University (1865). She authored several books, including one that Supreme Court Justice Thurgood Marshall called the “bible” of the civil rights movement. She co-founded the National Organization for Women, and in her sixties became the first African-American woman to be ordained as an Episcopal Priest. She was gifted writer of poetry, which spoke to the evils of slavery and Jim Crow. Her award-winning memoir, “Song in a Weary Throat: An American Pilgrimage,” was published in 1987, two years after her death. Murray became a trusted friend to First Lady Eleanor Roosevelt and powerful influence on leaders such as Representative Eleanor Holmes Norton, social activist Marian Wright Edelman and Supreme Court Justice Ruth Bader Ginsburg. 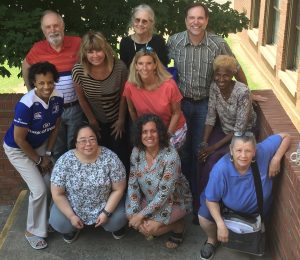 Although Murray was raised by her grandparents in Durham, we in Orange County like to claim a piece of her as well due to her ties to the Chapel of the Cross — where she celebrated her first Eucharist, and the University of North Carolina. The university denied her Law School admission in 1938 because she was Black (She later was denied admission to Harvard University because she was a woman). In a letter to Frank Porter Graham, then president of UNC, she argued that any hesitation among the students about admitting African Americans should be answered by “frank, open discussion” and a “give-and-take process where prejudices are openly aired and accounted for, where correct interpretations are made and where enlightenment is gained in an atmosphere of mutual co-operation and respect.” Mr. Graham wrote back, arguing for gradual change. Murray responded: “We of the younger generation cannot compromise with our ideals of human equality. We have seen the consequences of such compromises in the bloody pages of human history, and we must hold fast, using all of our passion and our reason.”

This combination of uncompromising passion for justice and steadfast openness to dialogue was one of Murray’s hallmarks. Her complexity in being, challenging spirit for equity and commitment to her faith invites us to continue to celebrate her life each year. Please continue the spirit of Pauli Murray in our wonderful county by joining us at the Awards program and nominating someone who exemplifies her vigor for human and civil rights. More than ever in today’s climate, we need to applaud community members and emulate their good deeds.