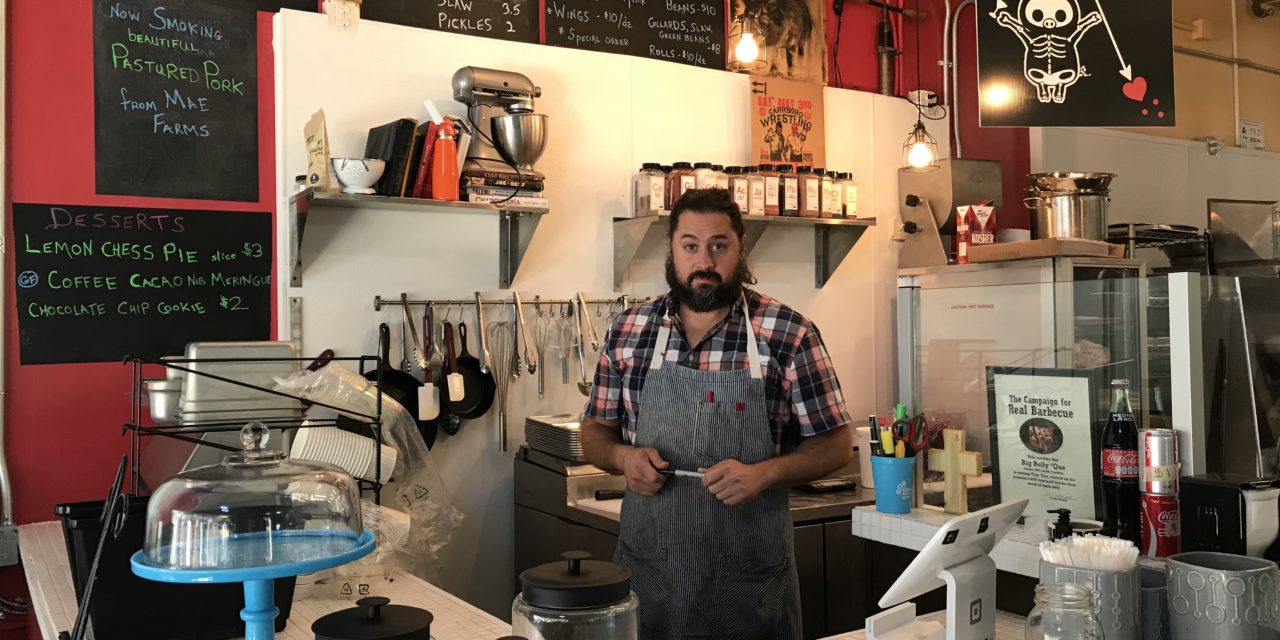 There hasn’t been a lot of barbeque to be found on Franklin Street in recent years – but Garret Fleming is changing that at Big Belly Que.

The wood-smoked barbeque restaurant is right off of West Franklin Street, located inside the Blue Dogwood Public Market.

Fleming has had quite a food journey. He was born in Charleston, studied in the Midwest and in France and attended the Culinary Institute of America in New York. He’s cooked in Charleston and D.C. and opened his first restaurant in coastal Maine.

But it all came back to barbeque and pork. Fleming opened The Pig, a now-closed restaurant in Chapel Hill, back in 2013. It wasn’t quite a barbeque restaurant, but it was often mistaken for that.

“I always loved cooking barbeque,” Fleming said. “My parents were always keen on North Carolina barbeque, so we were often told about the wonders of barbeque in the South.”

Fleming first got the idea for a real barbeque restaurant when he was the executive chef at Motto, a restaurant in downtown Durham. The chefs often cooked in wood fires, because it made the meat taste better.

“We decided to do barbeque Sundays, where we stay up all Saturday night after night service, and we invited all our friends and family from around the area,” he said.

Our resident bbq taster now holds the title of official “swag” model. T-shirts in all sizes came in today. DM us for shipping info or come visit us to get it with some smoky goodness! . . #bbqswag #bbqmodel #bigbellyque #ncbbq

That got Fleming and the other chefs talking, and in late 2017, they thought about opening a barbeque place.

The first thing they thought about was what they didn’t like about barbeque at other places.

“Essentially we came down to the idea that we either go to a place where there’s meat, or there’s sides, because I don’t think I’ve been to a place that has awesome sides, awesome desserts and awesome meats as well,” he said.

It also had a lot to do with the cooking methods the restaurants use, Fleming said. He and the other chefs were disappointed that many barbeque spots had switched to propane, because it’s easier to control and manage, as well as cheaper.

All of that, along with a book about cooking barbeque over wood, compelled Fleming and his sister to open Big Belly Que in Chapel Hill.

“I thought doing something, like a hipster que spot, where we’re cooking over wood and making everything by hand would go well,” he said. “This opportunity seemed right in front of us.”

All of the meat Fleming uses for his barbeque is local, but it’s harder to source meat from the state because North Carolina is responsible for a large amount of commodity pig farming.

Commodity pig farming damages the environment, Fleming said, and the meats don’t have the same consistency, so he tries to find local sustainable farms.

“I had been partners in restaurants, but I never opened something solely with my family,” he said. “The autonomy is obviously a nice idea.”

He says he and his sister are open to ideas of expansion, and he wants to eventually open a smoke shack in Wilmington.