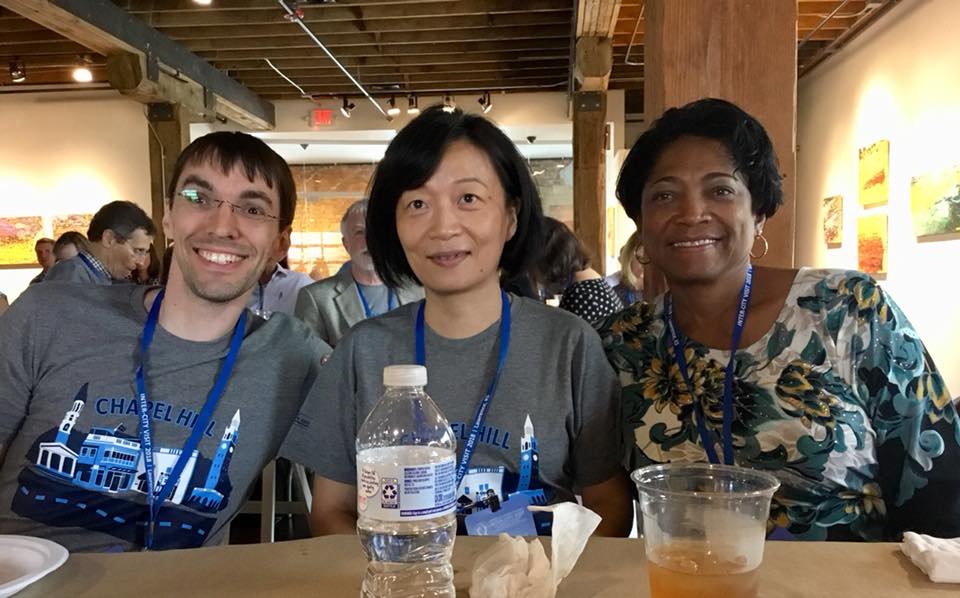 We’ve wrapped up our trip to Lawrence and we’re back in Chapel Hill, which on the whole is a good thing. Sure, we’ll miss the hospitality – but then again, we don’t have to expend any more energy trying to figure out what the heck “Rock Chalk Jayhawk” means.

(Our working thesis is that it’s an Illuminati thing.)

1. Downtown. We loved Massachusetts Street, which packs a lot of cool into half a mile. (Franklin Street is longer – for those on the trip who were wondering, it’s 0.8 miles to walk from Linda’s to Crook’s Corner, versus 0.6 miles to cover Mass Street’s five downtown blocks. But it feels like Mass Street has more.)

Many in our group are convinced the indy-to-chain ratio is a lot higher in Lawrence than in Chapel Hill. Personally, I’m still not sold on that argument – downtown Lawrence has quite a few chain stores of its own, and Lawrencians often complain that all the chains are taking over, just like we do. But there’s no denying Mass Street has a lot of awesome spots, including a fun toy-and-game store, lots of great restaurants and music venues, something called the Yarn Barn that people seem to like, and an “axe-throwing experience” called Blade & Timber that enraptured quite a few of us. (Yes, I can confirm that numerous Orange County elected officials and business leaders got together to throw axes on Monday night. Try getting that image out of your head.)

Oh, and here’s a thing: downtown Lawrence has three independent bookstores. (Two of them with cats!) Since the Bookshop closed earlier this year, Franklin Street doesn’t have a single bookstore, and that’s a sad sad thing for a college town. Lawrence’s bookstores aren’t necessarily thriving either – one employee tells me they’re a little worried this month because business didn’t pick up right away when the students returned – but Mass Street proves the demand is there. (My vision: a dusty used bookstore with its own craft-cocktail bar and a wooden stage in the corner for acoustic music and author readings, just like Asheville’s Battery Park Book Exchange. I lack the capital and the entrepreneurial knowhow to make this happen myself, so I’m passing the idea on to y’all.)

But what really makes downtown Lawrence special isn’t the bookstores or the breweries or the Yarn Barns – it’s the festivals, which are unique and spectacular across the board. Lawrence has a Busker Festival each May, with amazingly talented street performers from all over the world. For Christmas they don’t just have a parade: we’re told they bring in the fire department to ‘rescue’ Santa from a chimney.

The festivals make Mass Street even cooler than it already is, and they’re part of the reason Lawrencians love their city. I happen to have a chance encounter with a local radio personality, Tom Parkinson (he hosts Morning Edition on Lawrence’s NPR station, so he’s their version of Eric Hodge). Tom tells me he fell in love with Lawrence on his very first day, when he arrived in town to interview for his job – it was St. Patrick’s Day, as it happened, and 20 years later he still talks about how wild and alive Mass Street got that night. “It’s magic,” he says.

So that’s my takeaway from downtown: we ought to stay indie, and we need to have a used bookstore again, but the number-one lesson from Mass Street is how important it is to bring downtown to life. The stores and the restaurants help – but it’s the events and the music and the people who bring it home.

2. Big. Many of the really impressive things about Lawrence are things that we already have in Chapel Hill – Lawrence’s versions are just a lot bigger. I’ve already written about their Bioscience and Technology Business Center (like Launch, but bigger!) and the career skills programs at Peaslee Tech (like Durham Tech, but bigger!). We also get to tour the city’s Arts Center (like Carrboro’s, but bigger!), and we end our tour at their new Sports Pavilion, which is a lot like Hillsborough’s Sportsplex but…well, you get the idea.

Can we reproduce that big-ness in Orange County? Lawrence does have some advantages that we don’t have, like space: they can build a giant business incubator and a giant training center and a giant sports facility because they have lots of open, available land on the outskirts of town. Not so much in Orange County, so some of our efforts have to be more limited in scope. (One elected official tells me about an exciting private initiative to build a vocational-training venue in Carrboro, and we spend a few minutes brainstorming where it might go; we come up with some good ideas, but nowhere big enough to house a Peaslee Tech.)

But the primary thing that enabled Lawrence to build such big projects was a strong commitment to collaboration, and that’s something we can reproduce in Chapel Hill. “Collaboration” was definitely the key word of this year’s trip; the town, the county, and the university worked hard to build strong partnerships, and they’ve been able to leverage those partnerships into huge (and hugely successful) undertakings. So everyone in our group is returning from Kansas with a renewed commitment to collaborating and working together on big ideas and big things.

Then again, we in Orange County already do a pretty good job collaborating and working together on big ideas and big things, so maybe we’re not too far behind. In fact we may even be ahead: all weekend, we got surprised comments from Lawrencians on how much we all seemed to get along. And while Lawrence’s big projects impressed us, we’ve got some big projects of our own that put their versions to shame. Chapel Hill, Carrboro and UNC came together to build Chapel Hill Transit, one of the best public transportation systems in the state; we didn’t spend five seconds talking about Lawrence’s transit system because, well, it’s smaller. The towns, the county and the university have all worked together to reduce our waste and our water usage – another big undertaking that grew out of local collaboration. And as one elected official pointed out, our municipalities have also made a big financial commitment to affordable housing, another thing we didn’t hear much about from Lawrence. (Which doesn’t mean they haven’t made their own commitment to affordability – just that we didn’t talk about it on this trip.)

Either way, though, the lesson from Lawrence is this: whatever we decide to make a big deal, it’s going to take a lot of collaborative effort to fully realize that big vision in practice.

3. Durham. Lawrence and Chapel Hill are similar in a lot of ways, but different in quite a few others. One key difference that kept getting repeated: “Lawrence doesn’t have a Durham.” In other words, Lawrence is an entity unto itself, with no other cities in the immediate vicinity to coexist and collaborate and compete with. And we saw how this can change things, both for better and for worse.

Having no other cities around means you have a lot more of that open space for big projects.

It means when someone’s attracted to Lawrence and wants to move or put a business there, they’re moving to Lawrence; they don’t have the option of just moving to “the area” and relocating near-Lawrence-but-not-quite-inside-it. (Looking at you, New Hope Commons.)

But then again, it also means Lawrence doesn’t have another downtown to enjoy. It means Lawrence doesn’t have a DPAC, or a popular minor-league baseball team – or a Southpoint, for that matter. It means when Lawrencians feel like getting out of town and trying a new restaurant, they’re driving 45 minutes on a toll road to get to Kansas City. That’s how you have to get to the airport too. And all of that makes Lawrence less desirable than it might otherwise be.

As awesome as Lawrence is, as much as we fell in love with Mass Street, we’re all happy to be home again, and if we had to choose which town we preferred I think we’d all choose Chapel Hill. And that has a little to do with Durham’s presence, I think, maybe more than we typically recognize.

So thanks for being there, Durham. BFFs for life.

4. Ambition. This was the final point that got made on the trip, so I’ll end on it. One of the biggest lessons from Lawrence was about what a town can achieve if its leading players work together: the incubator, the arts center, the career-skills center, the sports complex. (Or, you know, affordable housing, environmental sustainability, racial equity, and a narrowed achievement gap.) But the lesson wasn’t just about what can be achieved – it was also about how fast it can be achieved. The Sports Pavilion, for instance, went from the proposal stage to the grand opening in just a couple years – “light speed,” according to one Lawrence official, and that was not an uncontroversial project. How did they do it? By committing to it, by working together, and by not taking “later” for an answer. And they made it so.

In Orange County, we have big ideas and big goals, and those big visions can be difficult to realize in practice – so we often grow complacent with slow progress. The lesson of Lawrence, the final takeaway, is that we don’t need to be complacent. We can make big things happen, and we can make them happen fast.

Aaron Nelson, the Chamber president who led the trip, said this by way of conclusion:

That’s a good line to wrap on, I think. Until next time.