Dispatch From LFK, Day 2: Working Together 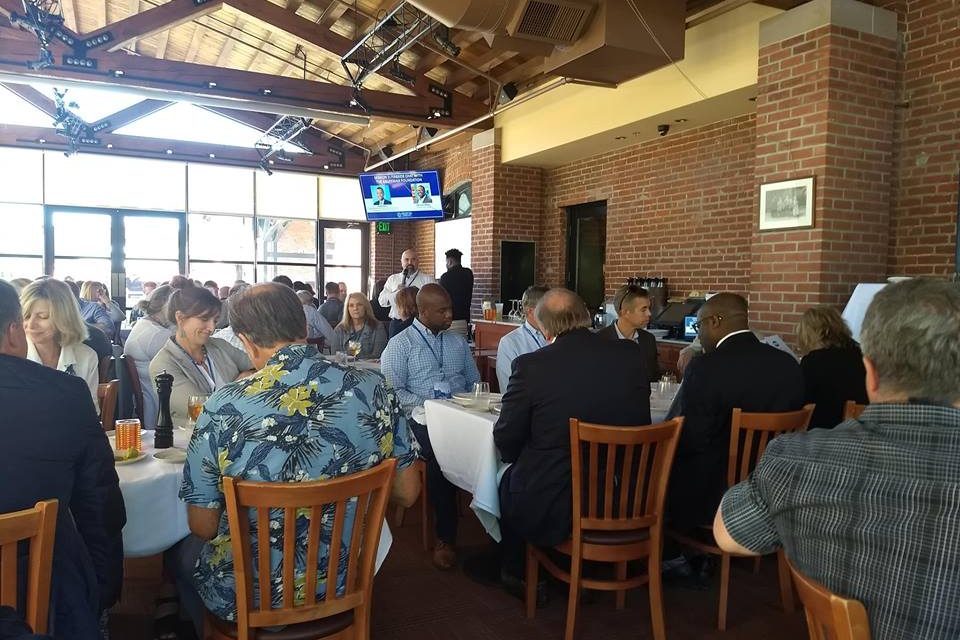 They’re laying out the red carpet for us here in Lawrence (literally, at one point!), so naturally we’re getting the best of what the town has to offer – not the worst. So it’s important to ask questions, be a little cynical, and try to take everything with a grain of salt.

Our hotel is the fabulous new Oread, Lawrence’s answer to the Carolina Inn; it’s also the subject of some legal controversy, I discover, as the developer is facing jail time for defrauding the city. Lawrencians complain about downtown parking, just like Chapel Hillians do; the city’s downtown director tells us there are plenty of available spaces for folks driving downtown, but a resident tells me there’s still a problem – for downtown employees who have nowhere to put their vehicles. (That’s a story we’re familiar with, right?)

So it’s not entirely hunky-dory here in Lawrence, any more than it’s entirely hunky-dory back home. But just like Chapel Hill, Lawrence is also full of vibrancy and cool ideas too, and our cohort is excited about bringing some of those innovative ideas to Orange County.

The operative word of this tour is still collaboration, and we got to see a couple major examples on Monday. First, the Bioscience and Technology Business Center (BTBC for short) on the KU campus – a giant incubator-accelerator space for new startup businesses, complete with office space, lab space and opportunities to connect with mentors and investors. (And unlike Chapel Hill’s Launch incubator, there’s no end date for startups – you don’t ‘graduate’ and move on to new digs until and unless you’re ready.) Imagine Launch, only 10 times bigger: the town, the county, the university and Lawrence’s chamber of commerce all came together with local entrepreneurs to make it possible; it’s a vision we’ve already implemented in Chapel Hill, only with a much, much larger scope. (Their stated goal is to try to build something that can compete with RTP.)

We see a similar thing just outside town later in the day, when we head to a place called Peaslee Tech: an old radio factory that’s been converted into a giant vocational-training facility for people who want to learn to be auto mechanics, welders, builders, electricians, truck drivers and just about anything else you can imagine. It’s a spectacular building – everyone’s pulling out their phones and snapping pictures in each new room we enter – and they made it happen with buy-ins from the town, the county, the university, three separate community colleges and local business owners. Right next to Peaslee Tech is the College and Career Center (“we don’t call it ‘technical school’”), another awesome facility for K-12 students and adults alike, complete with forensic science classes, high-tech maker spaces, culinary classes designed by top local chefs and more. (And they’ve partnered with the local Boys & Girls Club to expand the space and offer after-school programs for middle- and high-school students too.) Between Peaslee Tech and the Career Center, there’s a lot going on. Our own Durham Tech already has many of these programs – but as with the BTBC, Lawrence has done them on a much larger scale by bringing together a bunch of investors and stakeholders (and getting them to work together!).

So that may be the key takeaway from Lawrence: figuring out a way to ramp up collaboration between different entities. The coolest things we’re seeing here are things we already have back home – they’ve just been able to do them on a larger scale by getting more people around the table. (They also have resources we lack, like readily available, inexpensive land: Peaslee Tech and the BTBC are both built on several acres that weren’t being used. Touring Peaslee Tech, one elected official says it’d be terrific to recreate it in Orange County, but finding that much space near town would be a challenge.)

But our cohort here is excited about bringing those visions back home and finding a way to expand the partnerships and collaborative projects we’ve already got – particularly when it comes to programs like Peaslee Tech and the BTBC, both of which help students develop the skills necessary to succeed and thrive in the emerging economy. There’s a shortage of skilled labor in the US, so vocational training is a path to a stable, high-paying career – plus, one Lawrence official adds, being a community with a lot of skilled workers makes the city extra attractive to businesses looking to relocate. Likewise, the startup industry is exploding – one Chapel Hill official estimated 60 percent of new jobs will be in startups in the next five years – so a successful local economy will depend on having initiatives like the BTBC (and Chapel Hill’s Launch) that help people develop their entrepreneurial skills and enable them to turn their visions into feasible projects.

But one advantage we seem to have on Lawrence is an awareness of who needs those skills the most. Touring BTBC, one Orange County official asks what they’ve done to reach out to minority and women entrepreneurs; the Lawrence panelists don’t have much of an answer beyond “we’re happy when they come.” (Peaslee Tech’s got it covered, at least: they offer numerous vocational programs that are explicitly geared to women, so women make up a sizable percentage of their future mechanics and electricians. Those are high-paying occupations that are historically male-dominated.)

On entrepreneurship, we get a better answer from the Kauffman Foundation, a Kansas City organization that specializes in training and promoting budding entrepreneurs. Kauffman officials have been increasingly focused on identifying groups that face barriers to getting into the business world and helping them overcome those barriers – and more and more, this has led them back to K-12 education, creating programs to help poor and minority students develop entrepreneurial skills as early as elementary school. Sadly, we don’t have a large contingent of school-district folks on our trip this year, and we haven’t spent much time talking about education yet – but even so, it’s readily apparent that most of the issues we are discussing ultimately come back to high-quality schools. As much as we focus on collaboration within the business world, in the end, it’s the schools that matter most.

We’ll wrap up our trip on Tuesday with a few more panels. There’s still more to learn.