Kevin Stone said he knew the news reports were coming.

So he prepared his family and friends “as best I could,” he said.

Stone, a Chatham County probation officer and owner of a country store in Moncure, was recently the focus of two news reports on Raleigh television stations — one on WRAL and the other on WTVD — that focused on his ties to the Sons of Confederate Veterans. Stone is the North Carolina Division Commander of the group, a linkage that a group labeling themselves “Concerned citizens of North Carolina” has highlighted to local news media and administration at the N.C. Dept. of Public Safety. 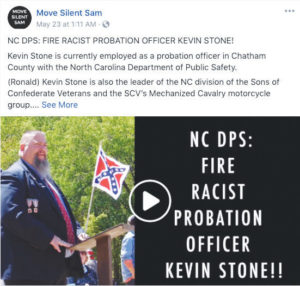 A Facebook page called ‘Move Silent Sam,’ likely in reference to the Confederate monument that once stood on UNC-Chapel Hill’s campus, recently created a video claiming Kevin Stone, a probation officer based in Chatham County, was racist based on his connections to the Sons of Confederate Veterans. (photo via Facebook)

“It has been a difficult and trying time that I would not wish on anyone, even my enemies,” Stone said in an email to the News + Record.

He said he’s gotten “a huge showing of support” from friends, family and various people from his past, even elementary school classmates. Friends have lobbied on behalf of him on Facebook, with some posts in support of Stone and critical of the news reports receiving hundreds of “shares” on the social network platform.

Stone hasn’t spoken to other media outlets and would not answer any questions related to his employment and whether or not there were any truth to claims of bias — “I am not at liberty to discuss my job at NCDPS,” he said — but said he was “just a regular person like anyone else.”

“I have flaws and have never claimed to be perfect — there was only one perfect person on this Earth and his name is Jesus — and therefore I expected the worst would come out of all this but instead it has proven to have been a blessing instead,” Stone said. “I knew when I accepted the nomination for Commander of the N.C. Division of the Sons of Confederate Veterans three years ago that it would put me in the crosshairs of those people that hate us for honoring our ancestors, but I knew it was the right thing to do and I am glad I did. I certainly did not expect this level of intense hatred and vicious unwarranted attacks on my credibility or judgment, but I guess I was a bit naive.”

Stone has spoken out multiple times regarding the Confederate monument in downtown Pittsboro, which is under consideration for removal by the Chatham County Board of Commissioners. Answering questions for the News + Record in March, he said the “memorial is not only an important symbol of Pittsboro and Chatham County’s role in history — it also represents a tombstone for the sons of the county who did not return from war.” He also gave public comment during the May 5 commissioners meeting on the topic.

In responding to those speaking about him, Stone said he’d point to the old adage: “If you point your finger at someone, there are three (fingers) pointing back at you.”

He added that the Sons of Confederate Veterans participate in numerous charitable events and honor law enforcement officers and first responders each year.

“Day in and day out, members of the Sons of Confederate Veterans just like me are part of the local community and should not be looked at any differently than any other civic organization,” Stone said. “We are some of the most patriotic and hardworking everyday people you can find and are only trying to honor our ancestors, nothing more and never less.”

A friend of Stone’s, Dusty Phillips of Sanford, was one of the people who came to Stone’s defense on Facebook. In a May 16 post, he shared the story WTVD posted about Stone and wrote, “I have known the man in this picture/article for nearly 35 years. I know Kevin to be a GOOD MAN. He is certainly not the racist he is being portrayed as.”

Phillips went on to write that he has “personally witnessed Kevin give to locals in need on many occasions,” and shared the story of a phone call he got from Stone while working on a Toys for Tots drive in Lee County, asking Phillips to come to his house.

“I drove to his home and there sat a huge enclosed trailer wrapped in North Carolina Sons of Confederate Veterans attire,” Phillips wrote. “There were horses, Generals and of course as part of the Confederate history a Confederate battle flag. Kevin and his friend David helped me load my entire truck bed down with toys for the less fortunate kids of Lee County. They weren’t for the white kids, they weren’t for the kids of people who agreed with his passion for Southern heritage. They were for ALL KIDS! The kicker was, this enclosed trailer was the things that wouldn’t fit into the tractor trailer load of toys, blankets, toiletries that Sons of Confederate veterans took to the fairgrounds to hand out to less fortunate kids from our area. They also distributed these items to local charities within our community knowing first that it was going to help make life easier on many in need within our community and also knowing that many if not most were going to minority kids.”

A group of “concerned citizens” published an online press release on May 22 which said, among other things, that Stone had been “unacceptably compromised” because of his associations with Confederate groups, citing specific associations with individuals and groups the “concerned citizens” — who didn’t identify themselves in the press release — deemed as “white supremacists.”

The release said, “Mr. Stone’s supporters will attempt to deny what is right in front of everyone’s nose. They will say that all of the connections we’ve documented here are innocent coincidences, and that their obvious inferences amount to defamation. They will say there is ‘no proof’ of anything. But this is a diversion.”

The release said it was “impossible for anyone to prove beyond any doubt that Mr. Stone is ‘a racist,’ and that is not our aim.” But it says Stone’s “demonstrated pattern of behavior and associations” and Stone’s “own deliberate actions” has caused a loss of public trust.

“Mr. Stone has lost the public trust, and thus can no longer discharge his job responsibilities,” the release says. “He must be removed. In the interests of justice, Mr. Stone’s past record should also be carefully examined for evidence of bias against people of color. We request a prompt and thorough investigation of this matter, as well as why it wasn’t detected and acted upon before.”

The News + Record’s calls to officials and requests for information or response from the N.C. Dept. of Public Safety haven’t been returned.