Mondays with Mack: Evaluating A Big Win over Miami 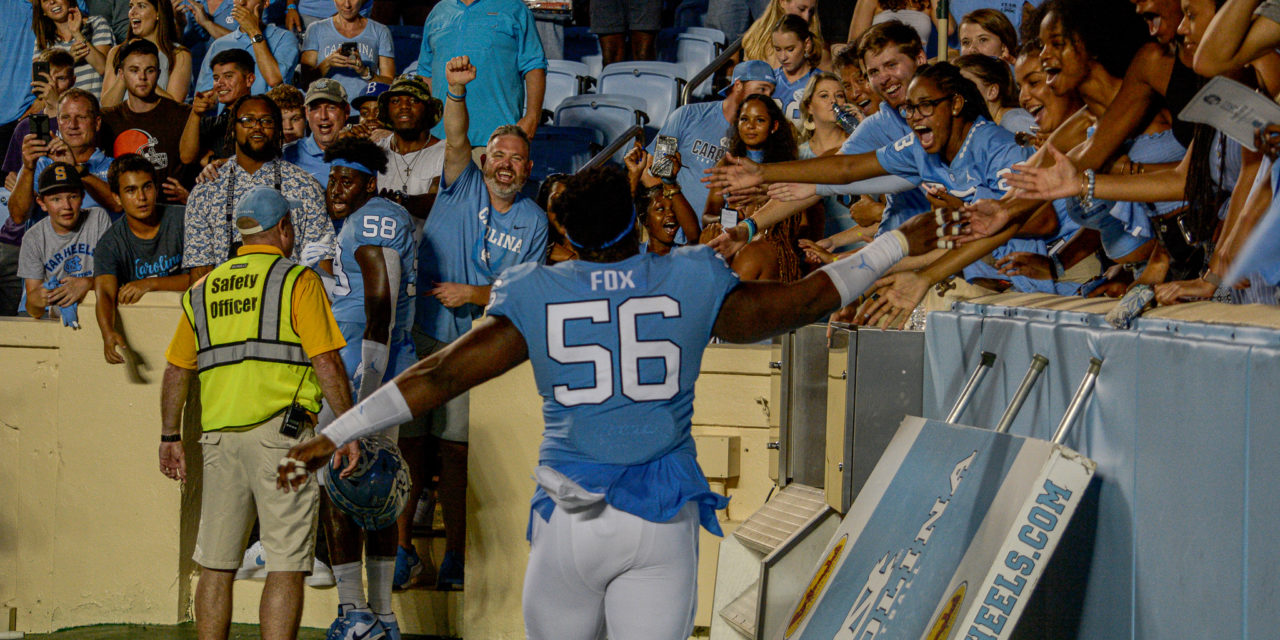 Welcome to the show Coach Mack Brown. Coach, it is really good to be back with you again this morning, especially coming after that rousing win on Saturday night in Kenan Stadium.

Well thank you Ron. We had a great Saturday and Sunday night and I really want to thank all of our fans and all the people that came out on Saturday. The Bell Tower Walk was wonderful. The people in the seats early, they were all wearing their blue, the Carolina blue, they were loud.

I really felt like that probably more than any game that I had here in years that the fans were a huge factor on Saturday night and helping our team win and want to start out just by saying thank you and let’s make that the norm regardless of who we’re playing. That was a fun night. The weather was good, the opponent was really talented and good and it was just great all the way around, but that’s who we need to be on Saturdays in Kenan Stadium.

Well coach, I’m glad it felt like that to you. I was in the stands and it felt exactly like that in the stands as well. And there was so much excitement about this game. Everything just seemed right. It was such a beautiful night under the lights. I love the way you came out aggressively in the first quarter, jumped on Miami right away and seized all the momentum in that game. You were up 17-3 in the first quarter and it was a game of momentum. You know, you had it, you lost it and then you got it back at the end. It’s funny how that works out sometimes, isn’t it?

Well, it is Ron and it’s like life. It’s a roller coaster and it’s up and down and you never know what’s going to happen. And I think that’s the proudest thing I’ve felt for the young players on this team that for the first ball games, they’ve never quit. They keep trying. There’s two come from behind wins in the fourth quarter and last two years, they’ve tried so hard and haven’t been able to finish.

People are calling them the cardiac kids and I think that’s what I’m getting. My heart’s running real fast at the end of these games, but you gotta give them credit. It was really hot. The game was really physical on Saturday night, but we came out on top and we’re really, really resilient. Even though for the first two games, we haven’t played great in a lot of areas and there’s stuff we can improve, but that makes it more fun as well.

Well, Sam Howell did it again. It was like déjà vu. Does this kid have ice water in his veins? Or what is the deal with him?

He’s very mature. He’s played beyond his age as a true freshman. To be able to take of 90-something yard drive and finish the game out against South Carolina and then come back last week and overcome the fourth and 17.

A lot of younger quarterbacks like him would have thrown underneath the chains and been nervous because he’d been sacked the two previous plays. So you gotta give him credit for not only that, but then he throws up a ball to Beau Corrales that we should’ve caught for a touchdown and then is about his third read to go to when he hit Dazz Newsome in the end zone to win the game.

What really seems different about this Tar Heel football team and you know we’ve all been watching Carolina football for a long time. This team just feels, it just seemed like they’re confident that whatever happens is going to be good and they’re going to be able to come back from adversity no matter what it is. How do you instill that kind of confidence in your team?

The credit really goes to them, Ron, and the assistant coaches because if the assistant coach is confident and we hired a tremendous staff I feel, and then they teach them everyday how to win the game. If you’re winning the game every day in practice, then it’s easy for that to transition to the game and that’s what we’ve told them.

Today’s practice, we will be winning the wake forest game and you have to go game speed and you have to have the mentality and see you making that play in the game. And just like the last minute drives of the last two games, we do that every day in practice at the end. And that’s who we are. We figure out ways to win or stop the other team, we always have a field goal to win the game at the end. And those are real game type situations that you just have to go over and over and rep so many times in practice. So when it comes up in a game, you’re ready for it.

You mentioned this earlier that there were some problems and one of those problems of course, is in the kicking game. We had some problems there. Give us an assessment of what’s happening there.

Well, I thought the first week against South Carolina that we didn’t do well in many areas of the kicking game. Mike Rubino, a grad transfer that came in from Appalachian State was five for five on kickoffs. He kicked them all out of the end zone, which really helps us because their returner was one of the best in the country and we didn’t want him touching the ball. And then our punt coverage was much better. Our punts were very inconsistent.

But Ben Kiernan, our true freshmen from Raleigh, we’re trying to get him to punt away from that same returner and probably put too much pressure on a true freshman that he missed a couple of punts. But we’ll go back and let him punt this week because our coverage is better now. So we felt like, Ron, that our kicking game was much, much better on Saturday night than it was in the opener against South Carolina.

We’ve talked a little bit about Sam Howell and his amazing performance on a Saturday night, but Miami had an outstanding performance from its redshirt freshman quarterback. That guy presented a really tall task for the Carolina defense. But in the end the Tar Heels held up pretty well.

Yes, he was 30 for 39 and we sacked him three times and he got sacked 10 times in the opener against Florida but they had two weeks to prepare and they did a good job and they had a good plan and he’s going to be a really good quarterback.

I think that our fans saw two top quarterbacks probably in the country in the next couple of years play Saturday night. So give them both credit. I’m just glad that our freshman came out over their redshirt freshman.

I know that it’s really difficult to move on from a game like that. What a victory it was for Carolina. But now I know you have to focus early this week on Wake Forest coming up on Friday night. First of all, how do you feel about playing on Friday night?

Well, I don’t like playing on Friday nights because to me, Friday night is for high school football and that’s something that we always believe. And this was a Thursday night game that got moved to Friday. Ron, you know, TV controls everything. So we’ll do what we’re told. But I’d rather Friday night be sacred for just high schools and that the way I’ve always felt and I think it’s important.

Now on the other side of that, we’ve got our third straight national TV game and there’ll be a lot of eyeballs watching us to see if we can handle the success of the first two weeks. And we told the guys two things this morning. We meet every morning at 6:30. So they’re in bed early and they’re getting up really early to make those meetings. But we told them that you don’t want to forget South Carolina and Miami, but you’ve got to move forward.

But we have to move forward and if you want to keep winning then there’s no other choice because you just got to go back to work. We also told them this morning, this is a short week so this is like a Tuesday practice for us here in a minute when we go out. So we told them we want you to have fun, we want you to enjoy your success.

They’ve got a lot of friends on the Wake Forest team because it’s an in-state game where a lot of the guys know each other. We want them to work really, really hard to get their bodies back in control where they’re fresh for Friday night. Because that was two real physical ballgames. We’re pretty beaten up. And then last, we want them to focus on Wake Forest now.

Well coach, we haven’t heard a lot about Wake Forest, but they also will come in at 2-0. Give us a really quick sketch of what kind of challenges they might present for the Tar Heels.

Well the interesting thing is they had a come back win to beat NC State last year. They blew Duke out at the end of last year. We lost to both of those teams. We’ve lost the last two times we’ve been to Winston Salem to play Wake Forest. And then they’re 2-0 to start this year.

They’re very well coached. They play hard. They have very few penalties. They don’t turn the ball over very much.

They’ve got a 6’3″ and a 6’5″ receiver and 6’4″, 230-pound quarterback and a big running back, and an older offensive line. So they’re a team that goes up tempo really fast. They try to keep the ball away from you. I think they ran 106 plays in the opener.

So we’re gonna have our hands full and our guys understand that we can’t sit here and say we’re 2-0, man. So this is cool. We got this thing, we’ve got to go back to work and this’ll be a really good challenge for us this week.

Well coach has gotta be fun and let’s keep that momentum going and go for 3-0 and of course we’ll have that game right here on 97.9 The Hill WCHL. Coach, it is always a pleasure to talk to you.

Thank you Ron. Our fans turned out so well for the game Saturday against Miami. We need everybody to pack that car and run up the mountain a little bit to get to Winston Salem at 6:00 on Friday night because we need to have a huge crowd there to keep these guys motivated.