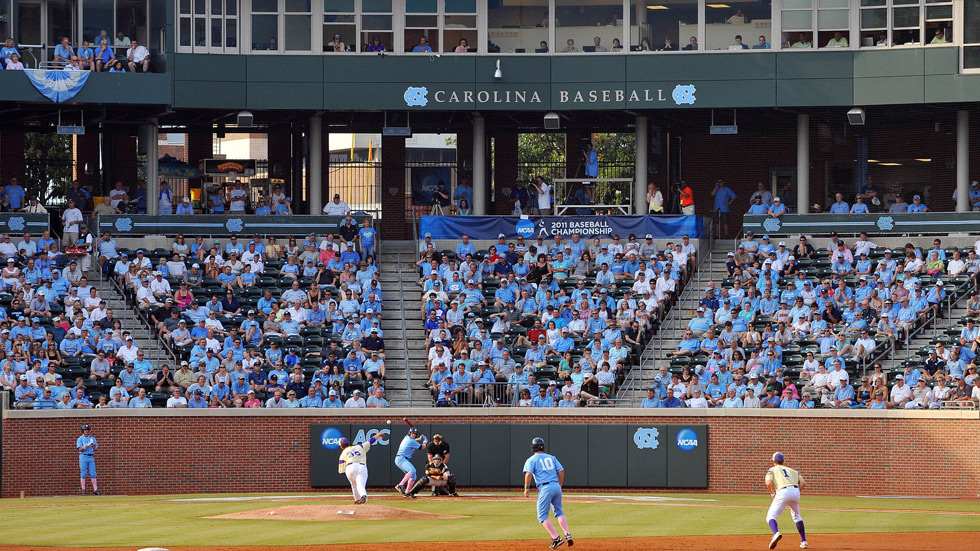 For the second straight night, the No. 24 UNC baseball team came out swinging like some mad-men, scoring 10 runs in the first four innings on their way to an easy 14-2 victory over the Elon Phoenix on Wednesday night inside the walls of Boshamer Stadium.

The margin of victory is Carolina’s biggest of the season and the 14 runs scored are the most by the Tar Heels all season long.

With the dominant non-conference win, UNC pushes its record up to 31-16 overall, while the Phoenix have now dropped four of their past five games, and fall below the .500 mark–now at 23-24 so far in 2015.

One thing can be said for certain about this game; it was clear right from the get-go that the Tar Heel bats had no intentions of this being a competitive affair.

“Pretty much it [played] out the way I would have like to scripted it out,” says UNC head coach Mike Fox, “I know it was a long game, but we got guys on the mound we needed to, we got guys in the [batter’s] box we needed to, got [backup catcher] Ryder Ryan behind the plate which we needed to, so a lot of good things today.” 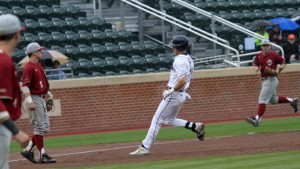 The Tar Heels had no problems moving runners and scoring runs on Wednesday. (UNC Athletics)

A pair of singles from Tyler Ramirez and Landon Lassiter off Elon lefty starter Jake Stalzer (2-6) kicked off the action in the bottom of the first inning, with Ramirez eventually scoring on catcher Korey Dunbar’s sacrifice fly to get things rolling.

Then in the second, Joe Dudek led-off with a double to left-center field, and then came around to score on an RBI bloop single from junior second baseman Eli Sutherland.

However, when Elon came to the plate in the top of the third, UNC freshman left-hander Hunter Williams lost his control–walking the bases loaded with two outs in the frame–prompting the coaches to make an early move to their bullpen “savior”, senior Trevor Kelley (5-1), who did what he does best by striking out right-fielder Ryan Cooper to escape the inning unscathed.

That would be the last time the outcome of the game was ever in doubt, because from then on it was smooth sailing for the Tar Heels, as they made sure the Phoenix never had a shot at coming back to life.

Elon’s bullpen responded to the missed opportunity by walking four men and hitting another, while allowing an enormous six-run inning in UNC’s half of the third. 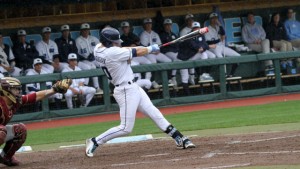 Zack Gahagan capped off the six-run third inning by picking up two RBI with a double to left-center field. (UNC Athletics)

The hit batter (Adam Pate) and two of the walks (to Joe Dudek and Alex Raburn) came with the bases loaded, accounting for three of those runs. Another one scored on a sacrifice fly by freshman shortstop Logan Warmoth, and the final two came on a double by fellow freshman Zack Gahagan.

Seemingly unsatisfied with the eight run lead, center-fielder Skye Bolt went ahead and extended the margin to double digits in the bottom of the fourth with a towering two-run homer to right-field off Elon’s Casey Jones–his sixth of the season.

“Hitting is contagious,” Bolt says, “When one guy gets going, then the rest follow. We’ve been looking for that spark [offensively], and it’s [been] provided here recently.”

Not until the top of the sixth did Elon scratch across a run, which they picked up when catcher Austin Leeney hit an RBI single off UNC lefty reliever Zach Rice.

Of course, the Tar Heels answered with three more tallies of their own in their half of the sixth, led by a two-run double from Joe Dudek, who led all hitters with three RBI in the game.

And although Elon scored again in the seventh, UNC kept up its torrid pace with an RBI triple in its next turn at the plate from little used freshman Brooks Kennedy–adding salt to an already deep Phoenix wound.

Mercy was finally shown in the eighth, when the Tar Heels failed to score for just the second time all night long, before sealing it up, and shutting it down in the ninth without allowing Elon anything to go home smiling about.

“That’s the only thing we’ve been missing is a little bit of, I guess, additional hitting,” says Skye Bolt about the recent offensive surge, “We’ve been pretty good with timely hits, and [in situations], but it’s always comforting for both your defense and your pitching to know that [their] bats are starting to swing it well.”

Awaiting the Tar Heels this weekend is their final ACC road series of the regular season, as they’ll travel to South Bend, Indiana to take on the Notre Dame Fighting Irish, with the opener scheduled for Friday night at 7 p.m.