Prisoners Of War In Carrboro 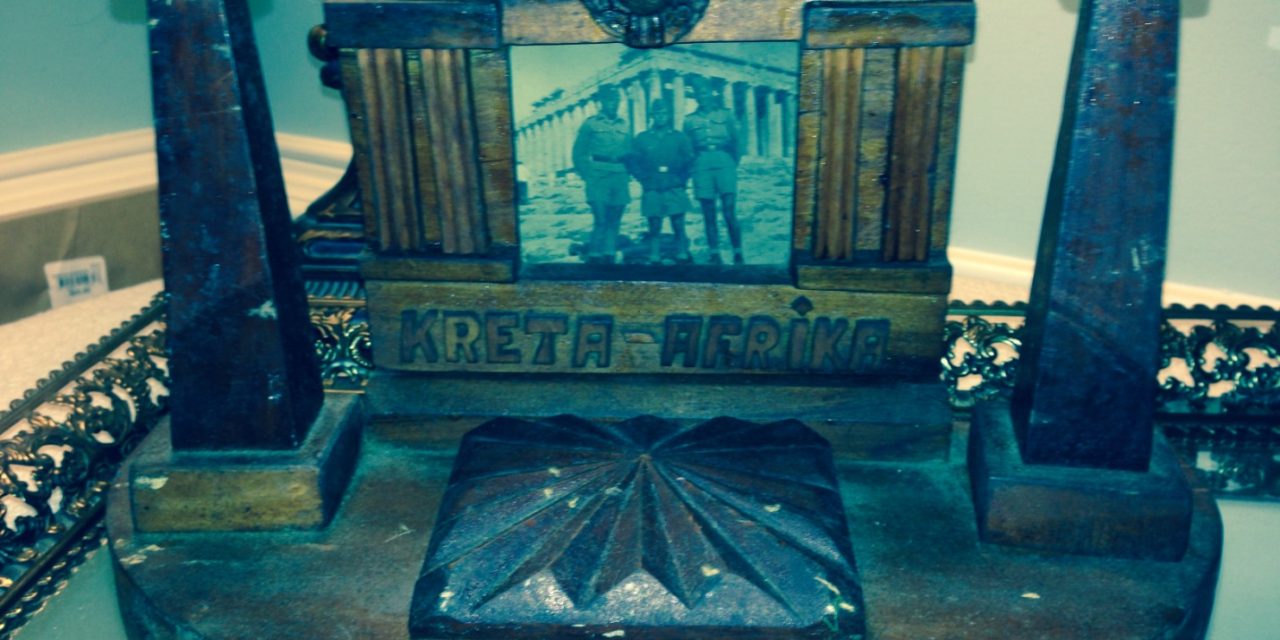 Many people in our area are not aware that the town of Butner in Granville County was originally named Camp Butner. It was created in 1942 from over 40,000 acres of farmland and forest that the War Department “purchased” (read as stole) from the families in that area. There were families, farms, churches and even cemeteries that were literally uprooted and relocated. 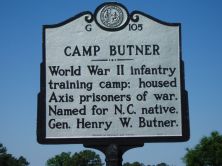 Camp Butner was originally an Army training facility for new recruits in the WWII effort. It was a fully-equipped boot camp and training/retraining facility. It even had a prisoner of war compound where prisoners of war (POWs) of several nationalities, including Italians and Germans, were detained.

During WWII, there were close to 20 prisoner of war camps in North Carolina. Some were located in military installations, like Camp Butner, Fort Bragg and Seymour Johnson Air Field, but most were located in more rural areas across the state where successful escape would have been difficult.

Most North Carolina folks do not know that POW compounds even existed here. Most folks do not know that large numbers of these prisoners were used as laborers.  I am not sure how many of these POWs were working in our area. They did the work that had been done by young men and women who were then in the Army, Navy and Marines. The POWs plowed fields, they worked on roads, and they did what had to be done to keep our country functioning in that time of war. Many of these POWs were very cooperative because a large number of them were military conscripts from countries captured by Hitler’s troops. There were Poles, Slavs and many other nationalities from all across Europe. In exchange for their cooperation, they had a warm bed, three meals a day and the safety of being somewhere other than a battlefield.

I recently learned that my mother’s youngest brother, Stewart Dillehay, drove a bus to pick up a group of Camp Butner POWs who worked at Swain Hall (the UNC student dining hall at that time) and some other campus locations. UNC students sometimes referred to the facility as “Swine Hall.” These POWs were trustees, so they were allowed to function without a guard. Stewart would drive to Butner and pick up a group. He brought them back to campus to cook, wash dishes, bus tables, haul out the trash and do whatever came to hand. At the end of the day, Stewart drove them back to Butner.

Growing up in Carrboro, I had a next-door neighbor named Billy Watts who told me about his experiences with some of these POWs. Billy was several years older than me. He could not remember the man’s name, however. Billy said that the prisoners were brought to Carrboro from Camp Butner to load pulpwood and mill goods onto outgoing train cars at the Carrboro depot. They may have even loaded military ammunition, manufactured in the Carrboro munitions plant, onto the outbound train. They also unloaded train cars if there was cargo brought in. He told me how he would walk downtown and watch these men working. He became acquainted with at least one of them.

Billy told me that the prisoners would arrive at the Carrboro depot in the back of an Army truck several days a week. An armed guard or guards always came with them. Billy told me that the guards were more or less ornamental because they would usually end up walking across Main Street to a little café called the Smoke Shop to talk and drink coffee with the locals.

The lack of security surrounding the prisoners led to Billy meeting at least one of them. Since the security guards were usually not in evidence, it was possible to approach these men. This was just too tempting for a young kid like Billy. Somehow he was able to communicate with these men who came from far away. I don’t remember if Billy said the Germans spoke any English, but I know he didn’t speak any German. One of the men he befriended made a small wooden structure and gave it to Billy as a memento to show his appreciation to a small American boy for the friendliness he showed to a stranger in this land. The structure is shown below. The photo on the structure appears to be a couple of German soldiers posing with some unknown person in a different style of uniform. He may be Greek – the Greek Parthenon appears in the background of the photo.

My friend Billy passed away a couple of years ago. One of his daughters now keeps his memento of WWII. Sadly, Billy is no longer with us, but his story lives on. 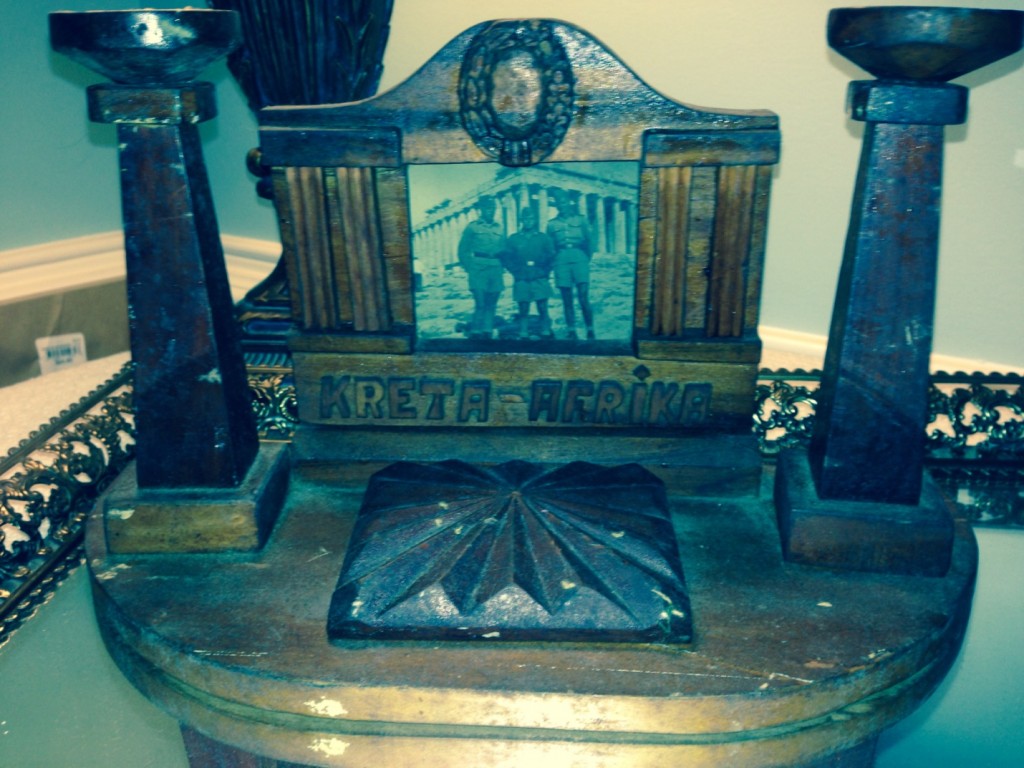 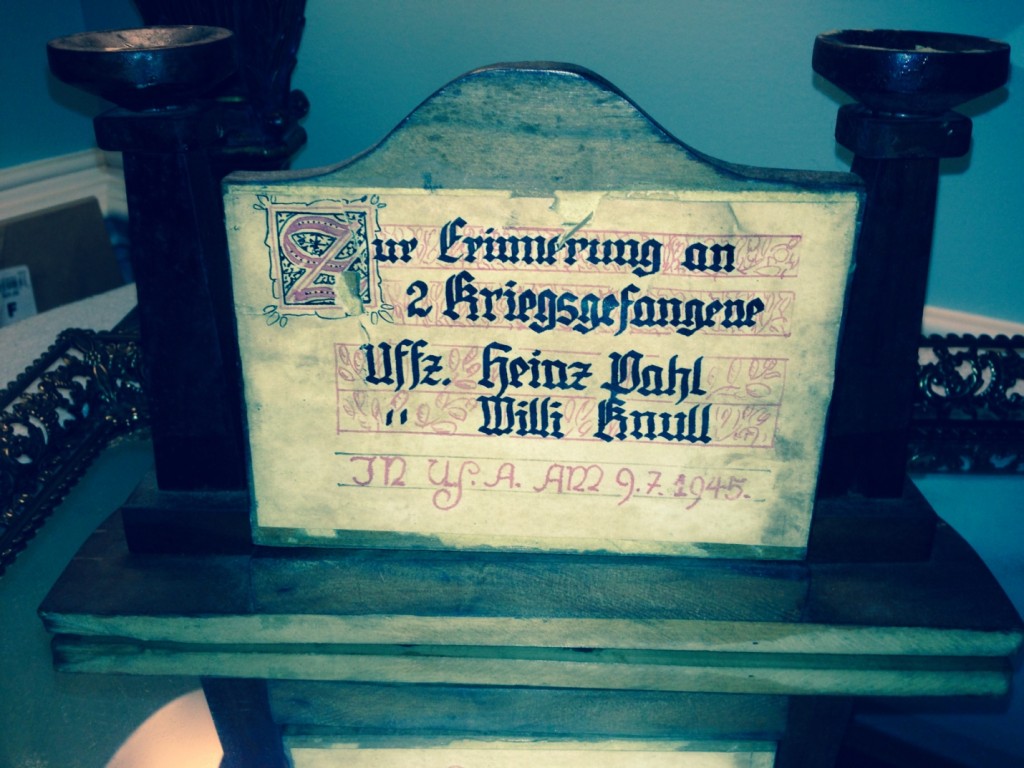 This inscription on the back says: