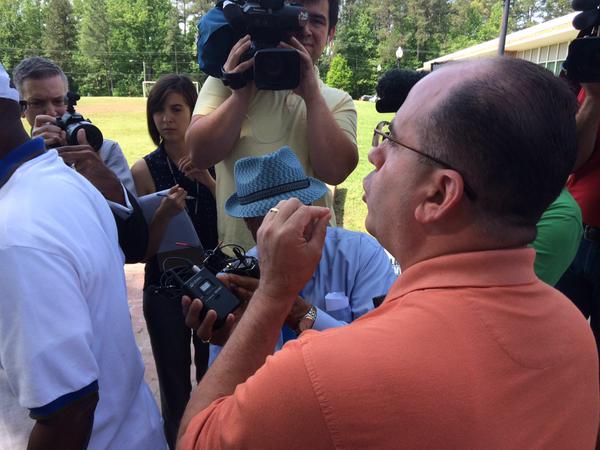 A press conference turned into a contentious back and forth on Wednesday after a picture of students waving confederate flags sparked concern from parents in Chapel Hill.

Ronald Creatore attended the press conference. He is the father of the senior at East Chapel Hill High who posted the picture of two female students waving confederate flags with the caption, “South will rise.” A comment was posted by another user reading “already bought my first slave.” 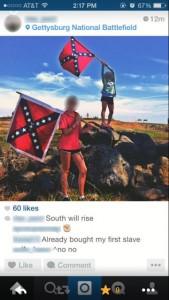 Following the press conference Creatore and Michelle Laws had a contentious conversation.

Laws is the Executive Director of the North Carolina NAACP and a product of the Chapel Hill – Carrboro School System. During the conversation, she offered Creatore’s daughter an internship with the organization this summer.

Creatore attempted to provide context for the picture that was posted from Gettysburg, where the class takes an annual field trip.

Students in the Civil War class at East Chapel Hill High School reenact Pickett’s Charge at Gettysburg every year as part of the curriculum. The picture, he says, was taken as his daughter and the other student were the only members that “survived” the battle.

Creatore says his daughter has received threats of violence and has been bullied since the post.

Laws says the NAACP does not condone violence of any kind. But she adds a further dialogue needs to be had.

“We can’t have an honest dialogue and move to higher ground of understanding and making sure that we’re not doing things unintentionally, if indeed it was unintentional and not deliberate,” she says, “to hurt other people.”

The tone of the press conference was clear from the beginning. Parents and leaders of the minority community in Chapel Hill are upset.

The speakers called for sanctions against the students.

Eugene Farrar with the Chapel Hill – Carrboro NAACP was the first to step to the lectern.

“We are here to speak for those slaves. Whose blood runs deep,” he says, “not only in Chapel Hill, but throughout this nation.”

Minister Robert Campbell, President of the local chapter of the NAACP, says this needs to be used as a teaching moment.

“If we don’t teach our young people to go beyond just passing tests, but to receive knowledge about what is being taught in the school,” he says.

As an example he asks, “What is it about the confederate flag? What is it that caused this type of stirring up in the residents in Chapel Hill?”

“The problem that we are addressing here, today, in the Chapel Hill – Carrboro City School System,” she says, “is racism and inequaity.”

She adds parents feel misled by the district.

“The parents of this community feel like we’ve been blinded and misinformed about the behaviors of an institution that we entrust our most precious gifts to,” she says. “We entrust our children to be educated in a positive, safe, [and] fun learning environment.

“At this day and age, we believe that all of our children are being governed equally. But we hear the sounds of hopelessness and frustration in the conversations that we have at home with them at night.”

Speaking at the press conference, Laws says she was proud of the community coming together over this incident.

“I am also offended, on the other hand, and troubled by Superintendent Forcella’s whitewashing of this incident,” she says.

“There are some folk who ought to know better and who ought to be able to understand that racism in any form needs to be addressed head on – especially by those that we consider responsible, educated, intelligent, and informed adults like our superintendent.” 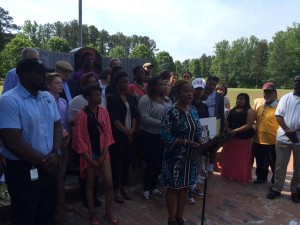 Laws was referring to the statement that Forcella sent to staff members following the incident.

Laws pointed beyond this incident, to punishment rates that differentiate between white and non-white students.

“We also know that it’s not just black children,” she says, “but in Chapel Hill it’s poor children.”

Laws says children are not born with hatred and racism, but rather those are learned behaviors.

“Our young people are learning bad behaviors from the adults linked to policies intentionally designed to harm the poor, blacks, and Hispanics,” she says.

School officials have said this incident does not fit into a policy that is on hand. Parents and others speaking out for sanctions to be handed down have tied the incident to the technology and bullying policies.

As of last update, parents have not been notified of the photo directly by the school district.