BLM Billboard Next to Confederate Flag to Be Removed

Last month, a GoFundMe started by a Chatham County resident to protest the large Confederate flag that stood on U.S. Hwy. 64 East Business Route in Pittsboro raised nearly $11,000. Since July 13, the flag has had a new neighbor — a 24-foot Black Lives Matter billboard.

The GoFundMe raised enough funds to cover the cost of keeping the sign for a year, but now, the billboard will likely be taken down in September. That’s because Pittsboro resident Sam White — the owner of the property both the sign and flag sit on — is deciding not to renew his lease for the billboard, according to an email from Lamar Advertising Company, which owns and updates the board.

In that email, posted to the Facebook page Chatham Takes Action, Lamar Advertising said the owner’s decision to not renew the lease “will cause the board and the entire structure to be removed from that property.” The company said it would assist in finding an alternate location for the billboard or grant a refund for the unused time.

To learn more about the timeline of the BLM billboard and its neighboring Confederate flag, click here.

The billboard, funded by residents as a way to show Confederate flags “do NOT represent” Pittsboro, was backed by social justice organizations Emancipate NC and RREPS (Recidivism Reduction Educational Program Services) after Lamar Advertising required a legal entity or organization to accompany a “paid for” tagline at the bottom of the billboard. Kerwin Pittman, the founder and director of RREPS, organized the backing from the organizations.

The GoFundMe was organized by a Pittsboro resident who began going by the initials “LC” after the campaign gained traction on social media. In just two days, the GoFundMe raised enough money for the sign to be erected for six months. In the end, the group raised enough money to pay for the sign for a full year and to donate extra funds to local social equity organizations. On July 15, the organizer posted an update message to the GoFundMe that $1,000 of the extra contributions was donated to both Chatham Organizing for Racial Equity (CORE) and Emancipate NC.

“It’s been an exciting couple of days since the billboard went up! And it is simply beautiful,” the organizer posted. “It brought me to tears the first time it came into view as I drove down business 64 into Pittsboro! I am so grateful for all of the messages of support I have received, and for those who are giving their input to the press and news outlets.”

Pittman, who has attended multiple protests in Pittsboro, said he believes the flag is not representative of the majority of the town.

“My opinion, especially as a Black man — if I’m riding into a small town and one of the first things I see is a Confederate flag, that lets me know what type of town that is,” he said.

That’s why adding the Black Lives Matter sign right next to the flag was so important, he added. 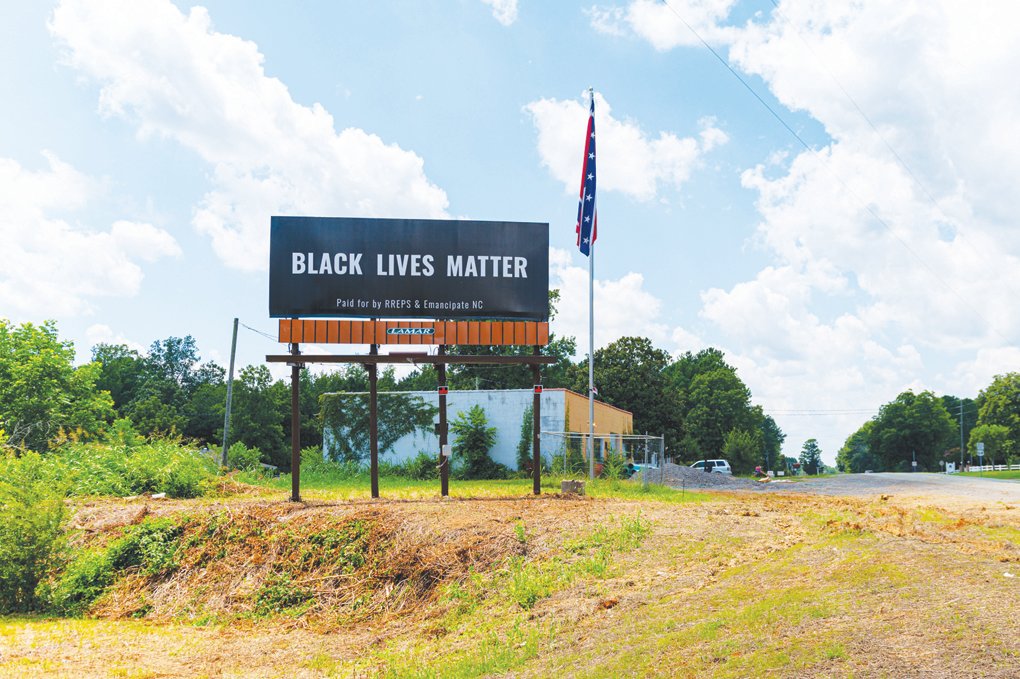 A 24-foot ‘Black Lives Matter’ billboard was recently installed on U.S. Hwy. 64 East Business in Pittsboro, adjacent to a large Confederate flag. The billboard was paid for through a GoFundMe campaign started by a Chatham County resident in protest of the display of the flag. (photo by Peyton Sickles)

This is not the first time there have been debates in Pittsboro surrounding Confederate flags.

“This would also put us on the right side of history,” said Schwerin, who leads the nonprofit Abundance NC. “I guarantee it would make national news and other municipalities would follow. Let’s set the trend for creating a place of peace, inclusion and prosperity for all.”

In the email, Schwerin included links to articles referencing NASCAR’s banning of Confederate flags at its events and the Department of Homeland Security’s addition of white supremacy to its list of domestic terrorism threats in 2019.

Chatham County Commissioner Diana Hales responded over email and said that though “we may disagree with their message,” all citizens are granted the freedom of speech. Hales added that the board asked the county lawyer for guidance, who advised that granting such a request would be a violation of First Amendment rights.

“What people display on private property is their business, as long as they adhere to whatever setback regulations the Town or County has in place for things such as flagpoles and signage,” she wrote. “(Some) may see it as hate speech, but they have the right to speak. And, others have the same right of free speech to put up a billboard countering their message.”

It remains to be seen whether this countering billboard — standing for just a few days before organizers learned it would be removed from its spot next to the Confederate flag — will be relocated.