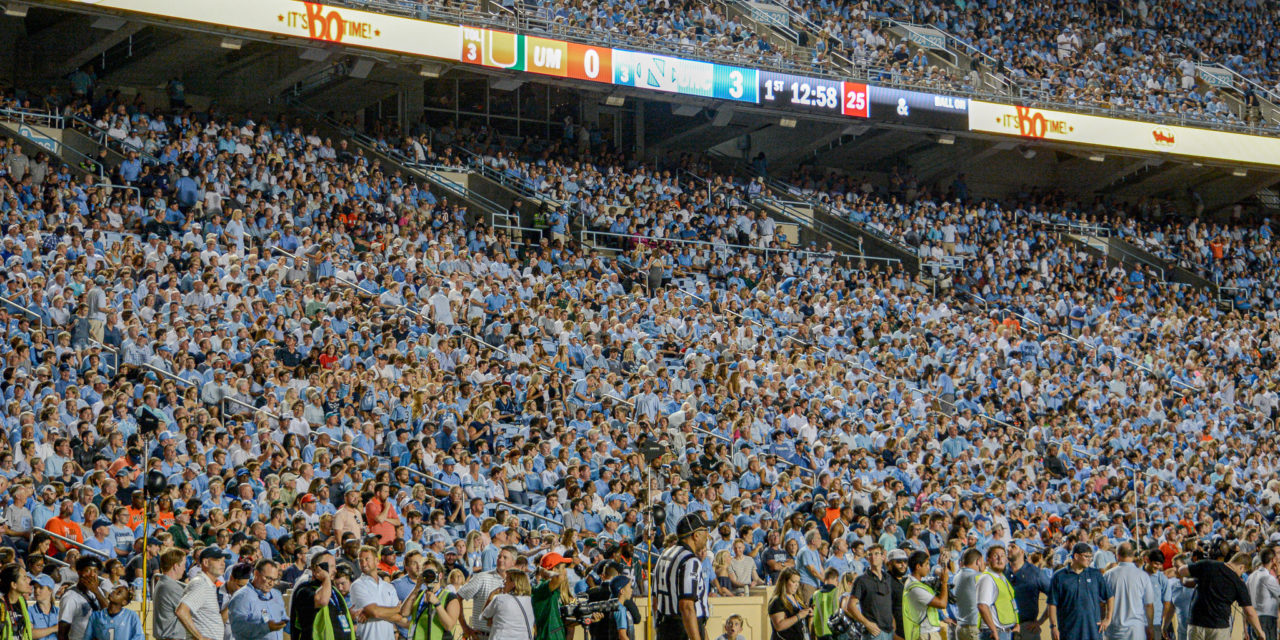 How about at the end, with the Tar Heels trailing 25-20 and facing a fourth-and-17 after having called their last time out to try and figure out what the hell to do in the waning moments of the home opener in Chapel Hill.

On a picture-perfect night in a refurbished stadium where the turf was gleaming green and every baby blue seat was filled, a few fans actually walked up the aisle leaving what looked like a lost cause. I hope they stopped at the top to see what happened next.

This Mack-is-Back Carolina team has now pulled off two remarkable victories in what was supposed to be a rebuilding year. Like the South Carolina opener late last Saturday, this was won on two clutch fourth-quarter passes from a true freshman quarterback to different receivers who made game-saving catches.

What are the odds of that happening against a favored and talented opponent that had kept you out of the end zone for the prior 50 minutes?

Miami has got to be the best 0-2 team in America. The Hurricanes, who lost a heart-breaker to in-state rival Florida in their opener, were stunned by Carolina’s fast start from attack mode. But the U had it figured out for the rest of the way, until it pushed the Heels back into impossible position that caused a few faithless souls to get up and go, thinking they have seen the end of this movie before.

Rookie Sam Howell had lofted touchdown passes into the arms of Dyami Brown and Beau Corrales last week in Charlotte. This time, he found unknown junior “Toe” Groves just past the first down marker in the deep right flat to keep his flatlining team on life support. Then Howell lobbed another precise pitch to Dazz Newsome, who dragged one foot down just inside the end zone boundary.

It was in front of the frolicking students who obeyed Brown’s mandate to be in their seats by 7:30, a half-hour before kickoff. The rest of the capacity crowd arrived in time to see a new marching band configuration, Rameses play his air guitar and the team stampeding from the tunnel to amped-up fireworks.

Those of us who have been watching UNC play football to various levels of success and failure over the decades are struggling with comparisons to what we’ve seen the last two weeks. You just don’t suddenly get your doo-doo together to beat a veteran team and, seven days later, score 25 of your 28 points in the first eight and last one minute against an opponent that meanwhile was running up more than 450 yards against you.

Yes, the magical Mack is in full teaching mode as his assemblage of vets and youngsters grasp how they can work such witchcraft. Indeed, from somewhere, there’s good luck shining down on a program that had almost none of it the last two years. And as the wizard of wisdom, Dean Smith, used to say, the most teachable moments come after wins that you might not have fully deserved.

If Brown makes the most of this, which we know he will, he may be building a championship-caliber team way before anyone expected. We don’t know all of them quite yet, but more pretty good Tar Heel football players seem to be lurking on that sideline.

The execution wasn’t perfect, just like at the concession stands where they kept selling beer into the third quarter until almost every patient patron was satisfied. Surely, whoever decides such things will extend that deadline until the end of the third period. It appears to be a consolidated effort all around.

The mixed tape between snaps needs some tweaking, and the older fans will in time learn who Eric Church is and the words to his song that will play to start the fourth quarter. The Marching Tar Heels are still happy to end with James Taylor’s Carolina In My Mind as people are leaving Kenan Stadium.

And it was truly ironic that after letting Miami race down the field for an attempted field goal and possible overtime, the UNC defense stiffened just enough to leave the U’s scared sophomore kicker facing a 50-yarder that he yanked wide left, as the happy Heels and their fans exploded in glee.

During a first-half timeout, another Carolina Legend had been introduced. Connor Barth was a freshman in 2004 when he split the uprights from 42 yard to stun the fourth-ranked Hurricanes and save Coach John Bunting’s job, as supposedly Steve Spurrier waited in the wings to take it.

Had Barth missed and Bunting been booted then instead of two years later, there is no telling what Carolina football might look like today. As is, Mack came back because we needed him and he wanted to coach again.

And if there’s a little pixie dust dropping onto his white hair while he puts this thing back together, we’ll take it. All 50,000-plus of us who had the faith to stick around and see what can happen when you believe.