The Journey to Your Plate: Complexity & Sustainability in Local Meat

Chatham N+R editor’s note: Chatham County’s farmers and restaurants have a unique partnership, one that’s designed to appeal to the palates of locals with discriminating — and healthy — tastes. In the second of a two-part series, the News + Record looks at what transpires along the winding road from farm to fork. Last week’s story looked at produce. This week: meat.

Pork is the other “white meat,” right?

Well, not exactly — or at least not always. 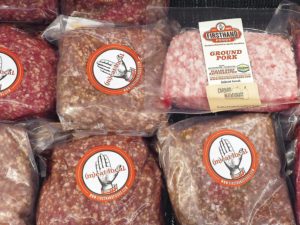 Some locally raised meat products from Meat First Hand Foods, such as pork and other products, and other local providers are available at the Chatham Marketplace in Pittsboro, Oasis Market in Siler City and more.

This phrase, which entered the lexicon after a 1987 National Pork Board ad, may describe the meat from animals raised on large-scale factory farms, says Ryan Walker, but it’s not so easy to generalize past that. When a pig’s growth isn’t accelerated, when it grows more gradually by the small farm model rather than the factory farm model, the meat is reddish pink.

Walker, the marketing and communications director at the Livestock Conservancy, sits at the conference (and lunch) table at the nonprofit’s cozy Pittsboro office. Laquesha Varn, who will be picking up the lion’s share of Walker’s responsibilities upon his move out-of-state is here, too, as Walker outlines differences between factory farms and the small-scale ones that were the norm for most of human history.

“We have seen a rapid decline in the number of farms and a rapid increase in the size of farms,” Walker said. “The heritage breeds do not fit into the model of the large-scale industrialized agriculture — living in very, very large numbers or close confinements. Not to say that they couldn’t, but they wouldn’t thrive in those conditions.”

The Livestock Conservancy protects rare heritage breeds of livestock, varieties such as the crèvecœur chicken or the Navajo churro sheep, that have been endangered by large-scale farming’s dependence upon a small handful of breeds. Granted, these animals grow slower, Walker explains. According to him, heritage cows produce less milk and mature more slowly. By one view, they’re less efficient. By another, however, the taste and quality is much higher, the butter fat content is increased and the meat has a more complex flavor profile.

In short, it tastes better. Yet raising livestock and getting it to market is a lot of work.

In this series, Chatham News + Record is exploring the often invisible supply chain that local food travels. Last week’s story was about produce. This week, in the concluding installment, we take a look at how local meat gets from the animal to the plate. 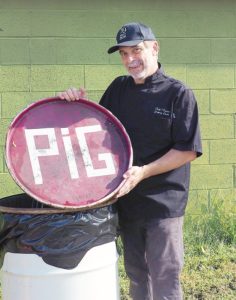 Greg Lewis with the bin used at the Pittsboro Roadhouse to put food scraps for the Burnette Ranch pigs.

On the one hand, meat has a longer shelf life. Whereas fresh produce spoils quickly, meats can be frozen. On the other hand, processing — the catchall euphemism for slaughtering and butchering an animal — adds additional challenges. For one, there are simply not that many processing facilities for small farmers. For another, not every facility processes every kind of animal — not many handle chickens, for instance.

“Usually people don’t understand the financial [elements] — what it takes to sell that first pound of beef out of the cow,” says Tucker Withington, who runs Goldston’s Lilly Den Farm with wife Mackenzie. The couple stands before their red full-size Chevy van — a fixture at the three farmers markets they frequent — as their kids play among the vendors in the Main Street Station parking lot in Pittsboro.

A cow is in utero for nine months, Withington explains, and it costs about $300 to feed the mom during that time. Then, it costs about $700 to feed a cow between birth and slaughter. Processing costs run about $400, he continues. Lilly Den Farm feeds its cattle forages from neighboring farmers and spent grains from Carolina Brewery, Withington explains, which keeps feed costs at a low dollar-a-day cost to feed an individual cow. Still, after all is said and done, it costs about $1,400 to raise a cow and bring it to market. After all that, Withington says with a grin, he sells the first pound of meat for $7.50.

The solution, he says, is to sell a quarter of each cow in bulk, which recoups the processing and logistics costs, but not the feed costs. CSAs help, Withington says, because that brings in more money up front. Beyond that, everything comes back to Lilly Den in $7.50 increments. 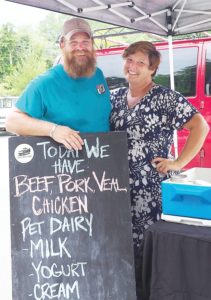 Tucker and Mackenzie Withington of Lilly Den Farms in Goldston. They raise chickens, beef hogs, and other animals, and work with local restaurants to provide meat and poultry.

Lilly Den raises a variety of species, which complicates logistics further. Lilly Den’s chickens are processed on-site thanks to North Carolina’s poultry exemption, which allows the farm to slaughter up to 20,000 birds annually. Given the lack of processing facilities that will work with poultry (facilities just don’t make enough per bird), this is all but essential for farms that want to raise chickens, ducks and the like. Lilly Den’s veal and small ruminants go to Chaudhry Halal Meat Company in Siler City, while its beef and pork are processed at Key Packing in Robbins. Both facilities are NCDA inspected, meaning their meats can be sold only within North Carolina. The nearest USDA-inspected facility Withington can think of is Piedmont Custom Meats in Gibsonville, which is north of Greensboro.

“In an ideal situation, someone would have a federal processor convenient to them,” said Walker. “What we’ve seen is that with the growth of industrial agriculture and the consolidation within agriculture, we have fewer farms supporting these local small butchers. The butcher shops have closed up.” He’s heard of farmers driving into other states just to get their animals processed.

There are three types of processing facility, Walker explains. Custom butchers are for personal use. These are folks who process deer or who process meat exclusively for personal consumption or for folks to give to friends. State-level inspection — that is, NCDA — is more stringent, and federal USDA inspection, which allows meat to cross state lines, is more stringent still. Without inspection, there’s no sale.

“We [buy directly] from two farmers, but they have to be handled in certified processing facilities,” says Evan Diamond, general manager of Chatham Marketplace in Pittsboro. The majority of Chatham Marketplace’s meats come through two distributors — Firsthand Food, which distributes local meat, and Albert’s Organic, which is a major nationwide distributor of meat and dairy.

“Firsthand is not certified organic,” Diamond continues. “If you are a certified organic meat processing facility, that even further limits your options. I’m not even sure what the lay of the land is for that in North Carolina.”

In terms of restaurants, Walker says, those with farm-to-table or farm-to-fork in the name tend to develop relationships with farmers. The butcher, really, is just the middle-person in that relationship. Some restaurants, such as Pittsboro Roadhouse, split the difference. They buy local when they can, Roadhouse owner Greg Lewis says, and they buy off a larger distributor when locals simply can’t provide the quantity they need.

“Say you’re a farmer. You’re raising cattle,” said Lewis. “I’m going to put your ribeye steaks or New York strip steaks on my menu. You’ve only got so many New York strips or so many ribeye steaks for my menu, but you’ve got hundreds of pounds of ground beef or stew meat to use up.” Between his restaurant and his catering business, Lewis says, his customers tend to want the better cuts. Beyond that, he’s had issues with consistency when he has used local beef.

“We get all of our pork from a Pittsboro farmer,” Lewis continues. “We have a pig bucket in the back. The pig farmer comes and picks it up every day, feeds our food scraps to the pig, and then we’re getting all of our pork chops, sausage, bratwurst, all of that from Burnette Ranch, which is right here in Pittsboro.”

Yet even that act of sustainability, of recycling kitchen scraps, must follow North Carolina agriculture law, he says. Legally, pigs can only be fed produce scraps from the kitchen — no plate scrapings and no meat. Pigs will eat anything, Lewis explains, and tainted meat can spread diseases that could wipe out entire farms.

Lewis always uses North Carolina chicken, which he requires to have no additives. Given his restaurant’s needs, he gets 200 to 800 pounds weekly, which is a steep order for a local farmer (remember, too, that many local farmers must process their own birds). So his chicken is distributed by US Foods or Performance Food Group, who in turn get it from companies like Mountaire Farms in Siler City.

“Is getting chicken from Mountaire a bad thing, a naughty thing, because it’s not buying it from the local farmer?” Lewis asks, simultaneously playing devil’s advocate and asking a practical question. “The farms are in the area and the chickens are processed in Siler City. By doing that, you’re employing Chatham County residents. You’re keeping farmers in the surrounding area employed. I mean, it’s a big circle, but I haven’t found a chicken farmer who will give me as much chicken as I need.”

Indeed, Lewis operates outside the large farms evil/small farms good binary and, to be clear, so does Walker. The Livestock Conservancy doesn’t exist in opposition to industrialized agriculture, he says. Granted, he takes issue with many, many common practices in industrial farming — its reliance on a handful of breeds, the prevalence of inbreeding — but the Livestock Conservancy’s true mission is to preserve heritage breeds. In case industrial agriculture ever does change its model, he says, it’s going to need new genetics from somewhere. And that somewhere may be small farms in Chatham County, where animals are raised slowly and chosen for taste, not efficiency.

“Really, saving heritage breeds is not just saving it for small, niche, sustainable kind of farmers,” Walker says. “It’s saving it for everyone and all of agriculture.”