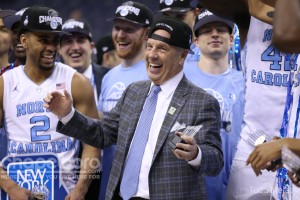 The Carolina Basketball Family is back together for Roy Williams.

Fifteen years ago, when Roy Williams returned to UNC as the head basketball coach, he had some serious objectives on the court and off. Success eventually came, but it wasn’t easy.

The team he inherited had lost 36 games in the previous two seasons, including a program-low record of 8-20. So Williams knew he needed better players and he needed to make those players he had better. In his second year, he won his first – and the school’s fourth – NCAA championship.

That helped him with a second goal, bringing all elements of Carolina basketball back onto the same page. The fan base had been unhappy, obviously. The former players weren’t returning during the summer and for games like they once did. The fabled family had acted like, well, some families act when they are not on the same page.

Williams began holding reunions, inviting players back to campus and trying to restore unity. He wanted all of them, past and present, to abide by one tenet of Dean Smith’s family law, support each other in bad times and good.

In 2007, the national championship teams of 1957 and 1982 returned for their 50th and 25th reunions. On the court at halftime of the game, 1982 point guard Jimmy Black thanked 1957 point guard Tommy Kearns; National Player of the Year Michael Jordan thanked his counterpart Lennie Rosenbluth. Hugs and high-fives abounded among two generations.

In 2010, during Williams’ worst season as the Tar Heels head coach, the program celebrated its 100th birthday. When an ailing Smith was escorted to mid-court Friday night and greeted players one-by-one, there wasn’t a dry eye in the house.

Last year, the 1967-68-69 three-peat ACC championship and Final Four teams returned for a 50-year anniversary. Charlie Scott, UNC’s first black scholarship athlete, and two-time ACC Player of the Year Larry Miller got the loudest of all the cheers.

This weekend, Williams invited every former player – those he coached as an assistant and head coach and those he only knew from their place in the family – to help him unveil his name on the playing floor of the Smith Center. More than 200 will be here to help him share the moment – as a family.

For Williams, it will be one giant mission accomplished.