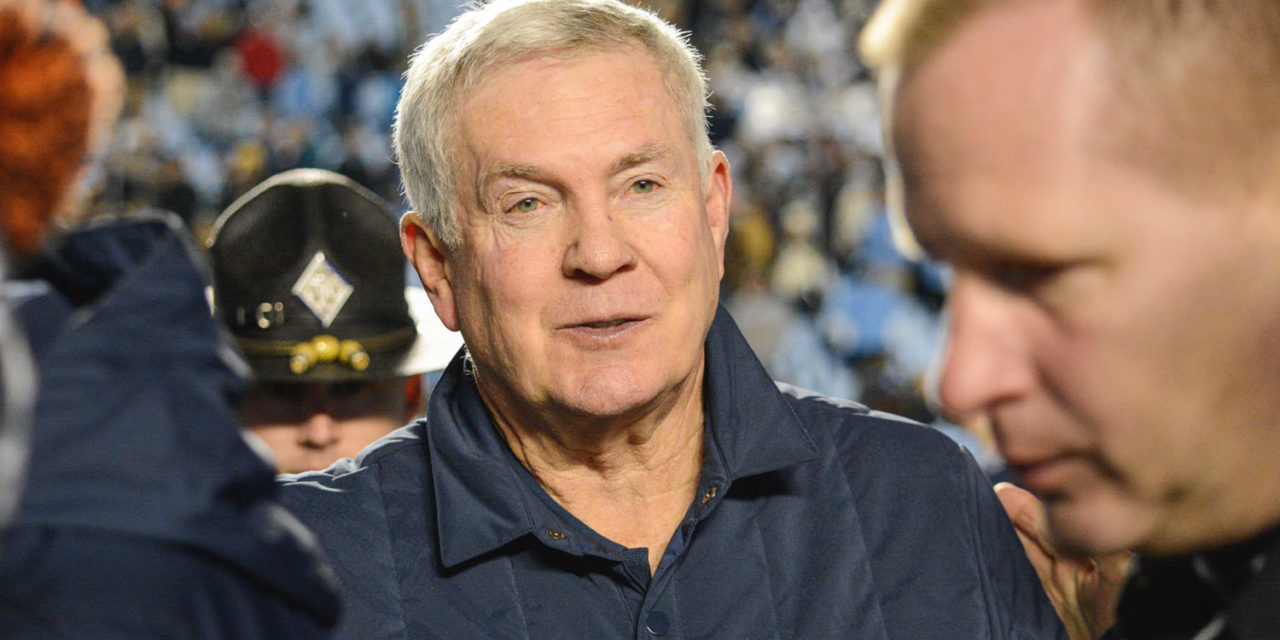 At halftime of the game at N.C. State, the Tar Heels had a simple choice. Keep playing dumb football and lose to perhaps the worst team on their schedule. Or start playing better, win their sixth game of the season and reach bowl eligibility for the first time in three years.

It was a simple choice. The careening Wolfpack could not beat them any other way.

These two teams had somehow reversed roles from the last two seasons.

State, using injuries as an excuse on which the suddenly-pathetic Pack had fully briefed the ACC Network broadcast team, lost its sixth-straight game that has chased away much of its own fan base. Carolina had rebounded under the return of Mack Brown and could not lose to the arch football rival without contributing to its own demise.

It was painfully obvious to anyone watching this rain-soaked game that the Tar Heels shot themselves in their wet feet repeatedly in the first half, including calling back-to-back timeouts in the red zone before Noah Ruggles kicked the second of his two field goals.

Carolina was slipping around on the sorry sod of Carter-Finley Stadium, and Brown barked to his trailing team at halftime, “State is not slipping!”

After the Heels had taken their 6-3 lead, Sam Howell threw a bad pass across his body that was deflected into the air and intercepted by State linebacker Payton Wilson, a one-time commit to Larry Fedora. Then, after two Carolina defenders followed the inside receiver, Wolfpack quarterback Devin Leary got an early Christmas gift when he spotted Tabari Hines all alone near the goal line for the home team’s only touchdown and last points of the drizzly day.

“We were trying too hard,” Brown said after his team won the second half 35-0.

“We made a lot of mistakes in the first half,” Howell said, “and most of that was on me.”

In the second half, Carolina played mostly mistake-free, dominating football, forcing three of four total turnovers that led to 28 points in its best third quarter of the season by far.

Run the ball against the Pack’s sieve-like defensive front? Javonte Williams, back in form after some nagging injuries, blasted through the State defense for three touchdowns.

Throw the ball against the Pack secondary that suffered some injuries, but no more than Carolina’s? Howell got it together with three more TD passes, giving him 35 and adding to his NCAA major-college record for a first-year player and tying Clemson’s Deshaun Watson for fourth on the ACC all-time season list.

When Williams capped a 26-yard run by diving across the goal line to give Carolina the lead for good, the Tar Heels were literally off and running. His next score came after taking a flat pass from Howell and blasting through a couple of State defenders into the end zone. His third was a six-yard slam that made it 27-10, followed by a 52-yard bomb from Howell to Dyami Brown near the end of the third quarter and a 13-yard strike to Dazz Newsome in the fourth.

The game was so over at that point that Brown began emptying his bench, from walk-on Raleigh quarterback Vincent Amendola to junior linebacker Jake Lawler, who got some pub last week for announcing he was graduating early to pursue a career in film, helped by Mack and Sally Brown, whose celebrity connections are vast.

By comparison, there is nothing sexy left to State football. The 41-10 loss dumped Dave Doeren back in the soup of his first (3-9) season before State earned five straight bowl bids. Couldn’t happen in one short year, you say? Well, it has and Doeren will be coaching for his job in 2020 under the watchful eye of new Athletic Director Boo Corrigan.

Doeren is already losing in-state recruiting to Brown, who dominated that territory during his first turn in Chapel Hill. The Wolfpack has no answer at quarterback heading into next season, while Howell will be one of the reasons that his 6-6 team leapfrogs a couple of ACC qualifiers with better records to a pretty good bowl game. The Carolina brand and Brown’s own Hall of Fame status will help, as well.

Yes, State has the most former quarterbacks still in the NFL, but Philip Rivers, Russell Wilson and Mike Glennon played for the Wolfpack long before Doeren arrived. Jacoby Brissett and Ryan Finley transferred in his early tenure.

Brown, by comparison, has begun signing potential successors to Howell and has running backs and wide receivers, some already on the roster, to take over whenever Javonte and Michael Carter (162 yards combined at State); and Newsome, Brown and Beau Corrales (15 total catches in Raleigh) finish their college careers. And, not to mention, he has already turned a once- failed quarterback, Chazz Surratt, into an All-ACC linebacker who leads the teams in tackles.

Without getting too deep into the weeds, the next two recruiting classes at UNC will fill holes and further build the engine that helps Brown duplicate what he did the first time around that started winning streaks against State and Duke. Dating back to 1990 and 1993, he now owns 15 combined consecutive victories over the Blue Devils and Wolfpack.

And now that he has helped his latest Tar Heels learn how to win, gone will be the first-half jitters that made the latest trip to Raleigh closer than it should have been. As outrageous as it sounds, the 68-year-old Brown is positioned to outlast younger rival coaches Doeren (48 on Tuesday) and David Cutcliffe (65), just as he did Sheridan and whoever coached the Blue Devils after Steve Spurrier moved on.

Older and wiser, Mack is Back.