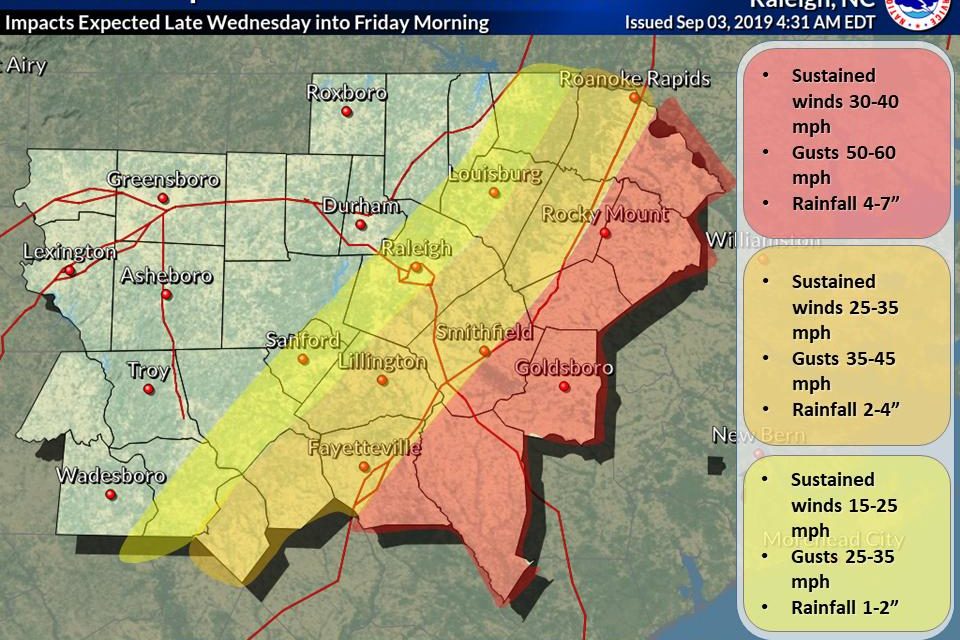 Gov. Roy Cooper said he activated 300 members of the National Guard to help with preparations and storm response. He declared a state of emergency Saturday for the entire state.

But the storm is predicted to pick up speed as it turns north toward the state on Tuesday, Cooper said. That makes it less likely Dorian would dump vast amounts of rain as happened last year during Florence, State Emergency Management Meteorologist Katie Webster said.

“This is a fairly fast moving storm and after talking with the (National) Hurricane Center we have good confidence that that storm will be moving quickly as it crosses our coast,” she said. “I think at this point we are not anticipating the large amounts of rain that we saw in Hurricane Florence.”

Dorian could drop 5 to 10 inches of rain on North Carolina, with points along the coast getting a foot or more, Webster said. That’s about half the maximum rainfall totals during Florence last September. Florence was blamed for 45 storm-related deaths in North Carolina and the National Hurricane Center lists it as causing $22 billion in damage.

In the region of the state closest to the storm steaming up from the southeast, closings and evacuations were already being announced Sunday. Brunswick County schools announced they would close around noon Tuesday so families could prepare for the severe weather. The University of North Carolina at Wilmington canceled classes for this week and told students to evacuate by Tuesday evening.

The National Park Service closed visitor centers and museums at the southern end of the Outer Banks on Monday, while Cape Lookout National Seashore and visitor services on Ocracoke Island, an isolated barrier island, will close Tuesday.

The owners of North Carolina’s largest motor-racing track made part of its grounds near Charlotte available for hurricane evacuees. The Charlotte Motor Speedway said Monday a campground and related bathhouse are open at no cost for people looking for inland destinations away from the expected coastal impact zone.

Atlanta Motor Speedway announced Thursday it was opening its camping facilities to evacuees.