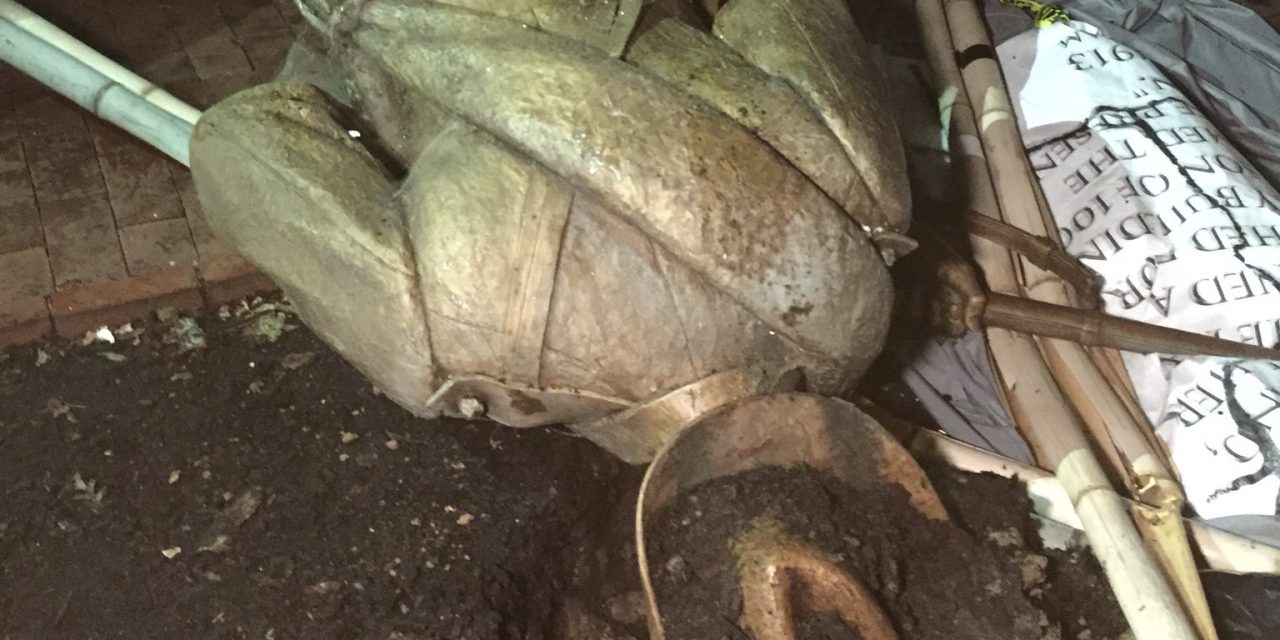 Protesters have torn down the Silent Sam statue on UNC’s campus. Pictures quickly circulated on social media showing the statue lying face down in the dirt.

Silent Sam is down pic.twitter.com/mUqf7NkS0A

Around 9:20 p.m., a group from among an estimated crowd of 250 protesters brought down the Confederate Monument on the campus of the University of North Carolina at Chapel Hill. Tonight’s actions were dangerous, and we are very fortunate that no one was injured. We are investigating the vandalism and assessing the full extent of the damage.

As you are probably aware, a group from among an estimated crowd of 250 protesters brought down the Confederate Monument on our campus last night.

The monument has been divisive for years, and its presence has been a source of frustration for many people not only on our campus but throughout the community.

However, last night’s actions were unlawful and dangerous, and we are very fortunate that no one was injured. The police are investigating the vandalism and assessing the full extent of the damage.

I appreciate the actions taken by the police to ensure the community’s safety and will keep you informed as additional information is available.

“We have been in touch with UNC-Chapel Hill Trustee Chair Cochrane and Chancellor Folt both last night and this morning about the removal of the Silent Sam statue on UNC-CH’s campus. Campus leadership is in collaboration with campus police, who are pulling together a timeline of the events, reviewing video evidence, and conducting interviews that will inform a full criminal investigation.

“The safety and security of our students, faculty, and staff are paramount. And the actions last evening were unacceptable, dangerous, and incomprehensible. We are a nation of laws—and mob rule and the intentional destruction of public property will not be tolerated.”

UNC Police said earlier in the evening that one individual had been arrested during previous clashes with police and protesters. The individual, who was not immediately identified, was charged with resisting arrest and concealing one’s face during a public rally.

Governor Cooper has been in contact with local law enforcement and UNC officials regarding tonight’s rally and appreciates their efforts to keep people safe. The Governor understands that many people are frustrated by the pace of change and he shares their frustration, but violent destruction of public property has no place in our communities.

It was past time for Silent Sam to be moved from a place of honor on the campus of the University of the People. It is unfortunate that state legislators chose not to hear and pass the bill we filed earlier this year to move the monument to an indoor site where it would stand as an reminder of the bitter racial struggle that continues to burden our country.

The Orange County Board of Commissioners released a statement calling the monument’s removal “long overdue.”

Silent Sam was erected decades after the Civil War and memorialized racism. Its removal was long overdue.

Of course, the removal of one monument does not eradicate the legacy of racial discrimination that divides our community and our nation and undermines our collective potential. We will and must continue to do the necessary work of dismantling racism and bringing the full measure of equity and inclusion to Orange County.

We are grateful for those in our community who have long shown leadership on this issue.

The removal of the Silent Sam monument during a rally last night has resulted in a wide range of emotions among members of our community.

As mayor, the safety of our entire community is my top priority in these situations. I wish to express my gratitude for the collaborative efforts of Chapel Hill and UNC public safety personnel who kept everyone safe last night.

After a rally that began at Peace and Justice Plaza in downtown Chapel Hill Monday evening (Aug. 20), the crowd moved onto the UNC-Chapel Hill campus where the statue was brought down.

When we learned of the rally, Chapel Hill Police began planning for a peaceful assembly at Peace and Justice Plaza. When the crowd spilled onto Franklin Street, police officers detoured vehicular traffic. This is our st­­andard practice in the interest of public safety.

Our focus for any large crowd event is to keep people safe. While there were heated exchanges between passionate protesters and UNC police officers, the crowd was largely peaceful and orderly when assembled at Peace and Justice Plaza. Chapel Hill Police made no arrests at the plaza or during the march on Franklin Street.

The Silent Sam monument has been a source of tension for many on campus and in the community for years – as is the case in communities across the country.

In our town, we have a long history of supporting peaceful dialogue when grappling with difficult issues. Recognizing that the monument does not reflect the values of being a welcoming and inclusive community for all, our Council has been unanimous in its support for relocation of the statue.

Based on that support, I wrote a letter in August 2017, asking that the NC Historical Commission move the statue to a safer place where the story of young Confederate veterans could be told in historical context.

At this point, it is my understanding that the UNC Department of Public Safety is investigating this act of vandalism. In the coming days and weeks, our Police Department and management team will work to support the University in its investigation.

Looking ahead, we will work together to move our community forward.  I encourage everyone to remember that our freedom of expression does not come at the expense of safety and public order.

Students and protesters rallied on the UNC-Chapel Hill campus on Monday night, calling for the removal of the Confederate monument known as “Silent Sam.”

The protest began at Peace and Justice Plaza in Chapel Hill, where organizers spoke to a growing crowd and large banners were unfurled. One of the banners read “For A World Without White Supremacy.”

Maya Little, the UNC grad student who faces charges after pouring a mixture of what she says was her own blood and red paint over the statue earlier this year, spoke to the crowd and received an ovation.

From there, the protest crossed the street to McCorkle Place where the Silent Sam statue stands. Following a tense confrontation between police and protesters, the banners were placed around Silent Sam, covering the statue from view. Protesters could be heard chanting, “hey, hey, ho, ho, this racist statue has got to go.”

This is a developing story.

Organizers handing these out at Peace and Justice Plaza ahead of #SilentSam protest pic.twitter.com/JnqPOohkAV

Maya Little, the graduate student who is facing honor court and criminal charges for defacing #SilentSam earlier this year, gets a big ovation pic.twitter.com/MTTZsc7bnk