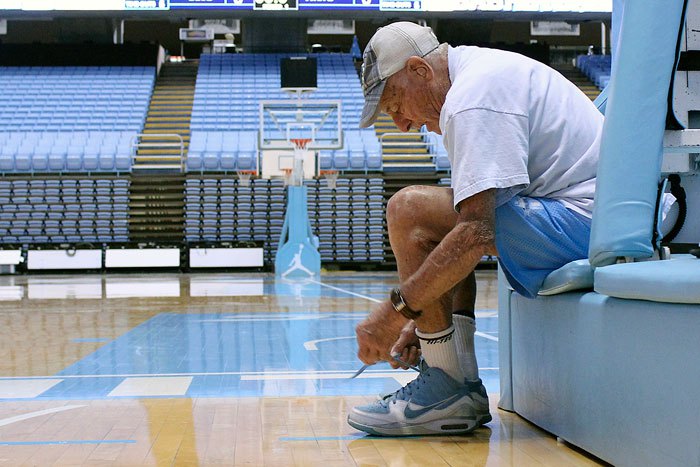 The oldest living former UNC athlete will return to old school to lead a “Walk for Health” today at noon.

Bob Gersten said he hopes he can help set a good example for younger folks.

Ninety-four-year old Gersten played baseball and basketball for UNC from 1938 to 1942.

These days, he’s more about golf and tennis – although he did suit up and get on the court five years ago at the 100 Years alumni game at the Dean Smith Center.

One reason Gersten can’t stop being physically active is that he can’t remember a time that he wasn’t, thanks to the encouragement of his family.

“I started when I was a young boy, about 7 or 8, with doing something every day, and playing all the time,” said Gersten. “My mother and father were a big help. They said, ‘Don’t ask for rides. Take a walk.’”

At UNC, he was a physical education major. He became the school’s assistant basketball coach after graduation.

His devotion to physical fitness continued when he joined the Air Force.

“I was a physical training instructor,” said Gersten, “and I coached a wonderful basketball team. I was so lucky.”

Basically, he’s spent much of his life as a coach and phys-ed teacher.

“The only time I wasn’t that, I was a dean of students,” said Gersten, “and I promoted a lot of physical activities then.”

It’s a two-mile walk from the tennis courts near Jackson Hall to the Finley Golf Club.

Physical fitness and sports really do seem to be in the Gersten DNA. Members of his family opened Brant Lake Camp in the Adirondacks in 1916. It’s one of the oldest privately owned boy’s camps in the U.S.

He said that one reason he’s leading today’s walk is that he thinks kids should learn about fitness by example. He advises today’s parents to keep their kids active during the hazy, lazy days of summer.

“Going to camp when you were young, and learning to play every sport was something that helped you for the rest of your life,” said Gersten.

Today’s “Walk for Health” event is free, and open to the public.