Firearms ‘Will Not Be Tolerated’ on UNC Campus After Weekend Protest 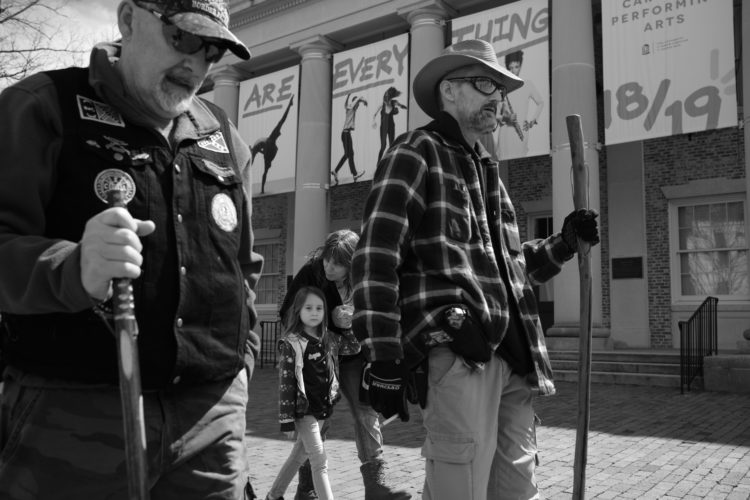 UNC officials said Monday that “possession of a firearm will not be tolerated within any boundary of the campus,” after a handgun was brought to a protest over the weekend.

Saturday marked another in the ongoing series of protests and counter protests regarding the Confederate monument that stood on the UNC – Chapel Hill campus for more than 100 years known as Silent Sam. The statue was toppled last August, and the base of the monument was removed earlier this year on an order by then-chancellor Carol Folt. Her decision came after several protests led to dozens of arrests on the campus in the wake of the statue being toppled on August 20. She also announced her resignation when ordering the base to be removed; after the resignation timeline was accelerated by the UNC System Board of Governors, her last day leading the university was January 31.

Groups and individuals who have been protesting Silent Sam over the last few months took to social media Saturday to point out that a member of the pro-Confederate group brought a handgun onto the campus.

Monday’s statement from the university confirmed that “members of a ‘Confederate heritage’ group walked onto the UNC – Chapel Hill campus from the Town of Chapel Hill via Raleigh Street to Cameron Avenue. At least one individual was in possession of a handgun. They were approached by UNC Police officers on the sidewalk in front of Memorial Hall and were asked to leave campus, which they did.”

It is generally legal in North Carolina for an individual to openly carry a firearm, unless otherwise prohibited.

“Due to immediate uncertainty Saturday about the application of these laws to the Cameron Avenue right of way, which is maintained by the Town of Chapel Hill, no arrest was made in this case,” university officials said Monday. But the statement continued by saying that any person bringing a firearm onto the campus in the future will be arrested and trespassed from the campus.

“The University is committed to the safety of our campus community. As it regularly does, UNC Police continues to monitor any information indicating a threat to the campus community from any group.”

Monday’s statement from the university was not attributed to anyone in particular. Interim Chancellor Kevin Guskiewicz tweeted when sharing the university statement that, “I share your concerns about this situation. I’ve been speaking with UNC Police and my leadership, and we take our campus community’s safety seriously.”

Photo via Daniel Hosterman, a documentary photographer from Durham, NC