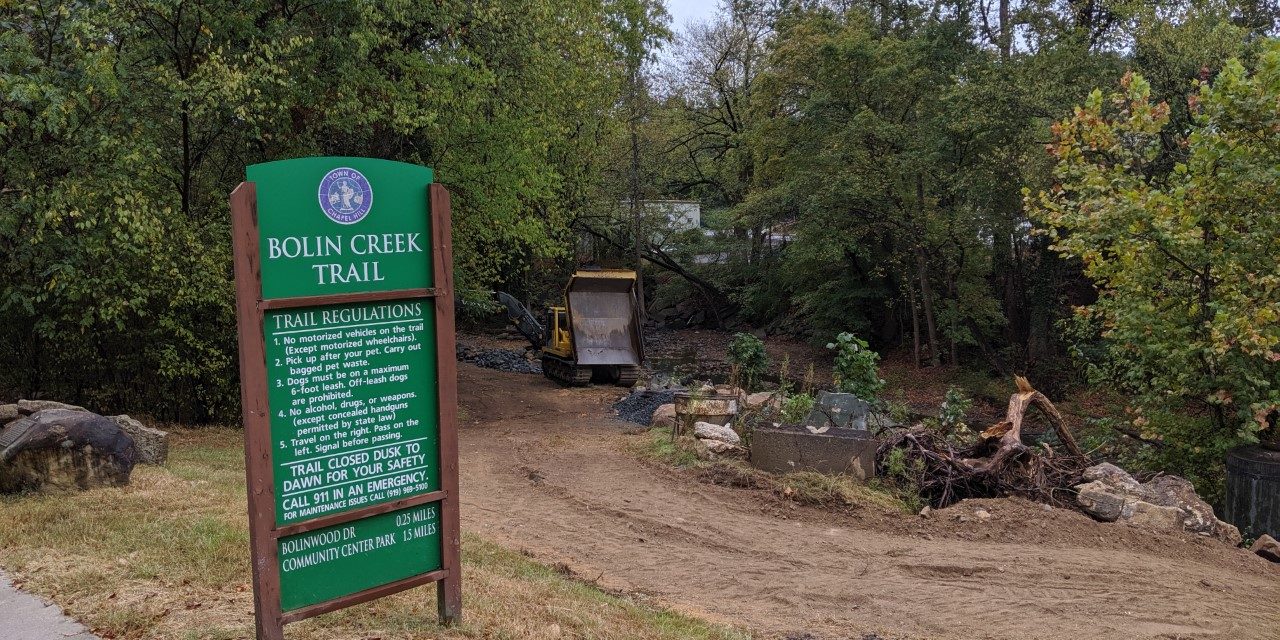 A 550-foot gap has sat in the Bolin Creek Trail for months. Those using the trail have had to cross busy Martin Luther King Jr. Boulevard to return to the trail instead of crossing under the bridge on the path.

Now, after delays from Hurricanes Florence and Dorian and the coal ash remediation project along the creek bank, construction to complete the stretch of the trail has finally resumed. The crews are extending the concrete path under the bridge eastward toward Bolinwood Drive, connecting to the existing paved trail.

The topic of coal ash deposits and their removal have long loomed over development and renovation to the Bolin Creek Trail. 828 Martin Luther King Jr. Boulevard, where the town’s police department is currently located, was a coal ash disposal site and borders the trail.

Chapel Hill has taken steps to prevent any further contamination of the soil since. Preventing any runoff of contaminated soil into Bolin Creek was a topic of discussion for the town council in June, as they heard plans for the removal of soil. 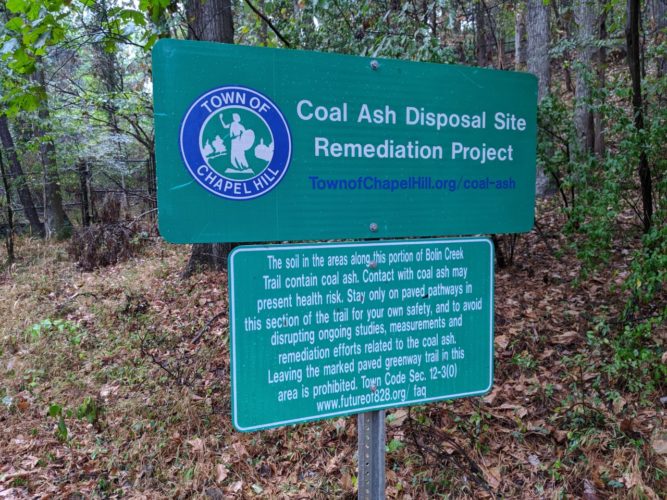 A sign for the coal ash remediation project posted near Bolin Creek Trail.

David Duncklee, President and Senior Hydrogeologist of Duncklee & Dunham which handled the coal ash removal, told the council while they will continue to monitor the soil on the property, there was no sign of runoff at the time into Bolin Creek.

“After these recent floods and heavy rains, we didn’t see a lot of washout,” Duncklee said. “But if there’s something observed once all the soil is removed and we’ve backfilled with clean [soil] or something that happens that potentially looks like it washed out coal ash, we could certainly take additional samples.”

While the future of the police department property is unknown, John Richardson, the Community Resilience Officer for Chapel Hill, said fences would be installed to prevent silt and runoff from the removal of coal ash from draining into Bolin Creek.

“Once we get the interim measures in place and once a decision has been made about where the police station can go,” Richardson said about the property, “we’d like to continue the conversation we started with you and the community about the future use of this property and how that relates to difference remediation options for the site.”

Additional renovations to the existing trail will follow once the extension is complete. Crews will replace the asphalt trail between Martin Luther King Jr. Boulevard and Bolinwood Drive with concrete to better withstand future flooding. The existing trail will also be moved further from Bolin Creek in at least one location and wood decking on the foot bridge from the street will also be replaced.

The town estimates the project will take around four months to complete and construction will be weather-dependent.