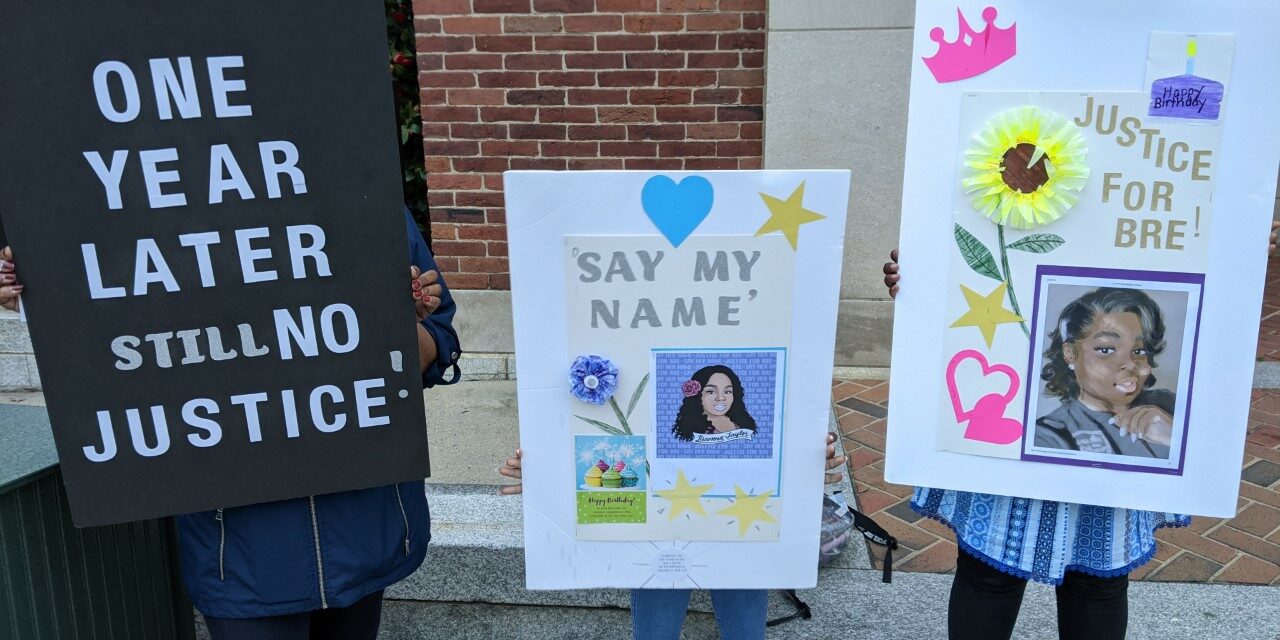 On the one year anniversary of Breonna Taylor’s death, Chapel Hill and Carrboro community members gathered to celebrate her life, praise the efforts of Black women and advocate against racial injustice.

Organized by the youth council of the Chapel Hill-Carrboro NAACP, Saturday’s vigil at the Peace and Justice Plaza on East Franklin Street featured a candlelit moment of silence, musical performances and several speakers. Many shared messages of better respecting, recognizing and protecting Black women while calling for changes to systemic racism and discrimination across the country.

Taylor, a health care worker in Louisville, Kentucky, died on March 13, 2020, after three, unannounced plainclothes police officers shot into her apartment during an investigation into a drug dealing operation. While the Louisville Metro Police Department fired one of the officers, none have been charged in Taylor’s death. The 26-year-old Black woman’s story gained national attention in the wake of George Floyd’s death in May of 2020, with people across the world holding demonstrations through the summer in protest against racial injustice.

While the international attention to Taylor’s death has largely diminished, some of the sentiments shared by speakers on Saturday in Chapel Hill included the need to continue recognizing her story and the others of Black women treated unjustly by police.

“When we were out here this summer, the streets were full, we had thousands of people participating,” said Niya Fearrington, one of the Youth Council organizers of the vigil. “It goes to show that if it’s not constantly being exposed to [people,] they’re not thinking about it. The reality for the Black person is every day they’re thinking about this.” 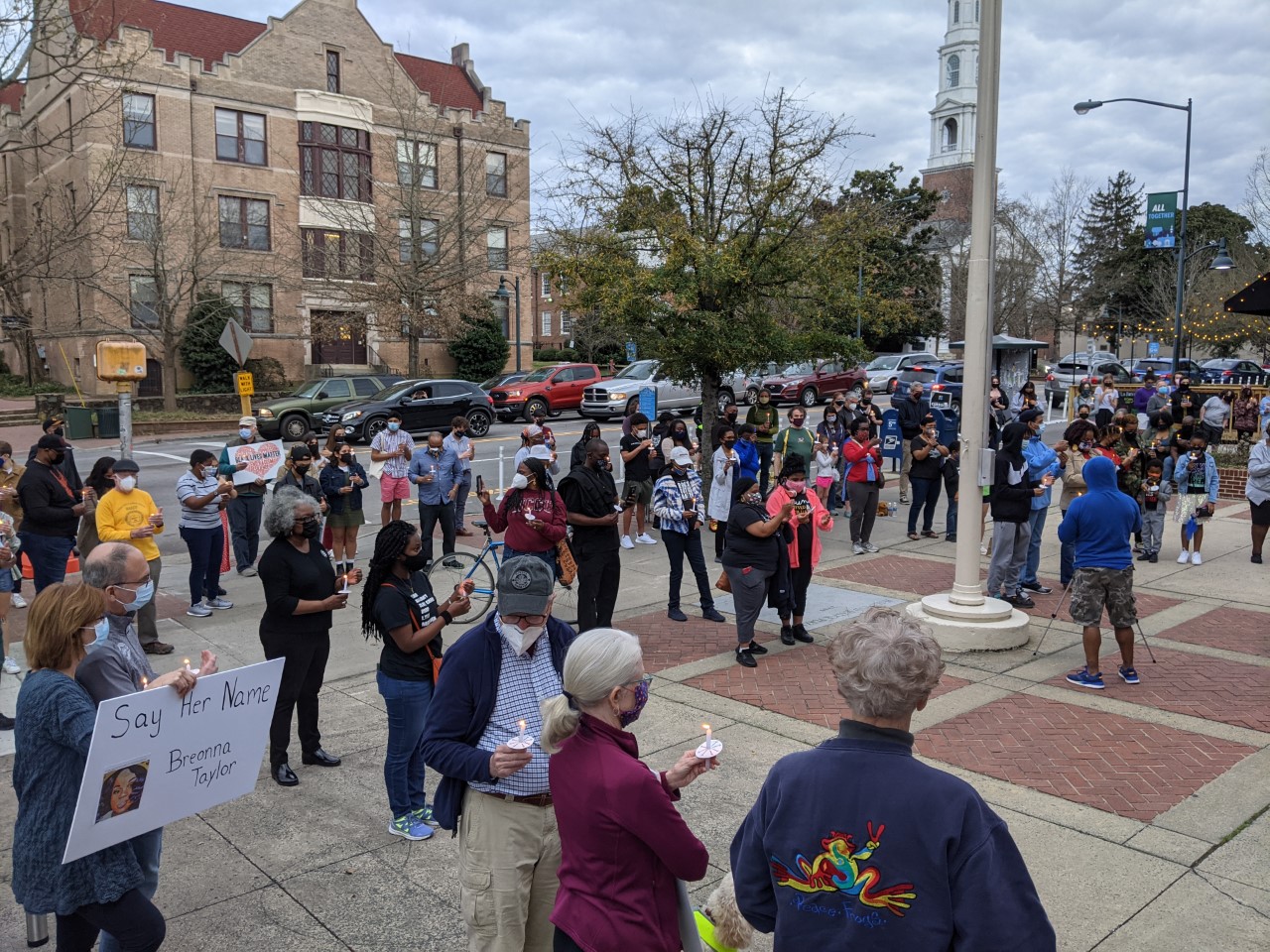 Community members stand in the Peace and Justice Plaza on East Franklin Street, holding candles in remembrance to Breonna Taylor one year after her death.

Fearrington said she thinks of Taylor every day, especially as a nursing student and essential worker herself. She said as the anniversary of Taylor’s death approached, she felt compelled to do something to honor her life and continue to celebrate the efforts of the local Black community.

“I feel like she deserved so much more from her community, from communities all over,” said Fearrington. “So, that drives me even more: to make sure people are continuously knowing her story and don’t forget who she is.”

President of the Chapel Hill-Carrboro NAACP branch Dawna Jones spoke to the crowd at the event, saying Taylor should be alive and would have gotten more attention if Black women’s lives were not undervalued by society. She said she often thinks of Taylor because of how unjust her death was and how “she could have been any of us.”

“What people should know, and people do know, about Black women is that we’re holding up the entire world,” Jones told Chapelboro. “We are doing the work, whether it’s in the office, church, school districts. We are elected officials, we are on the ground, serving at every turn. It’s important to celebrate and hold each other up for that, but it’s also important for people to recognize how much unpaid labor Black women are doing to keep us on track so that we don’t go back 400 years.” 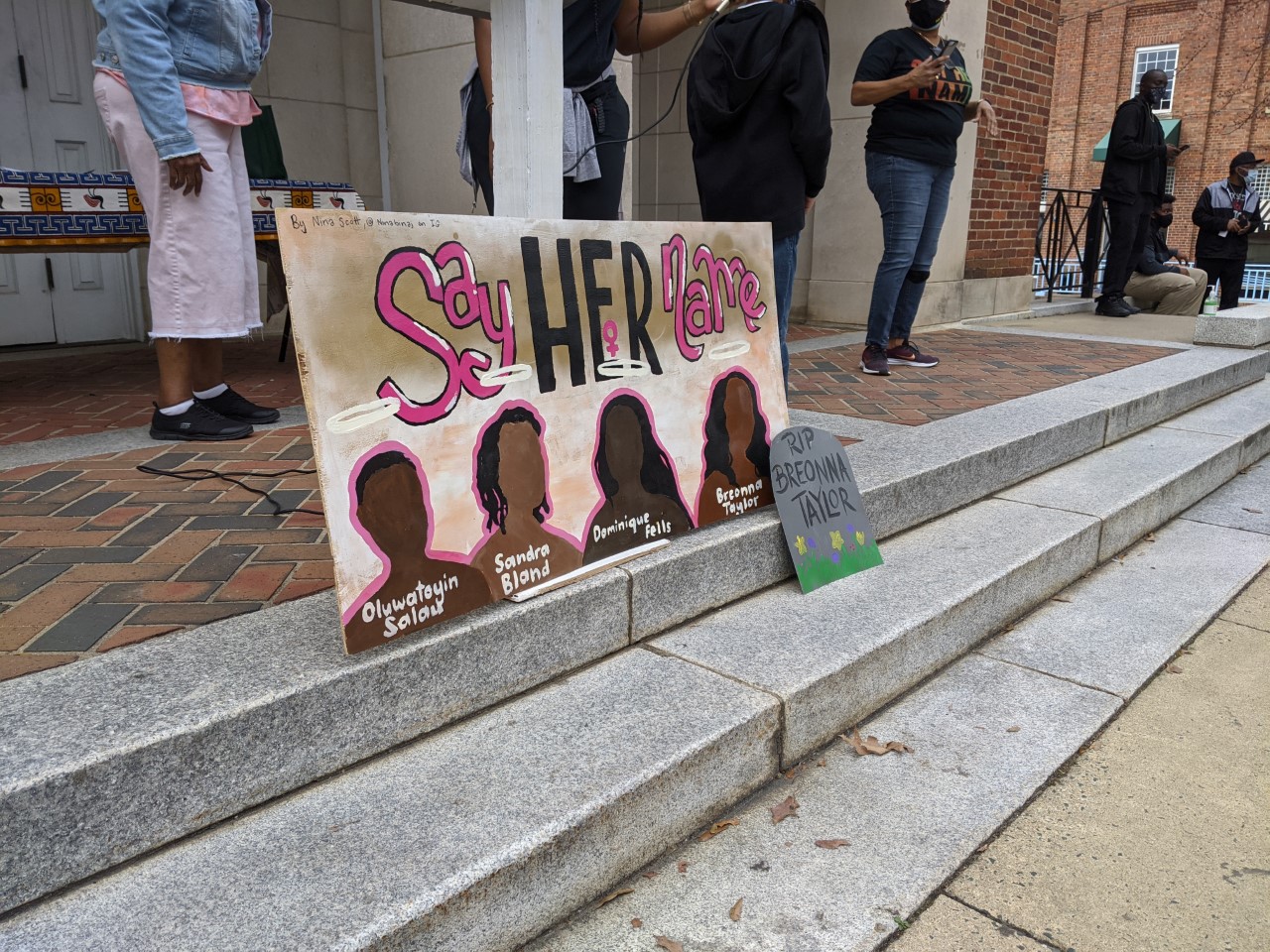 A painted sign by Nina Scott honors Breonna Taylor, as well as other Black women who demonstrators asked the community to remember.

Between musical performances, poetry, the sharing of personal experiences and chants of “say her name,” speakers on Saturday advocated for people to continue speaking out against racism and poor treatment of Black women. That included Jones.

“I think it’s imperative that [the community] keep Breonna Taylor in mind,” she said, “and so many of the women who are still with us here today and who are our unsung heroes. Help be [alongside] us doing this work: not for us, but with us.”