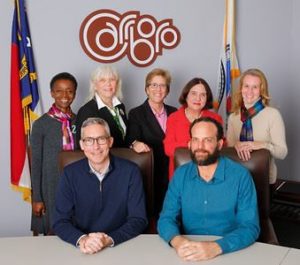 Carrboro Board of Aldermen 2019

Farm workers who are part of the Coalition of Immokalee Workers are travelling to universities this month to lead protests against relationships with Wendy’s until the fast food giant acknowledges and protects farm workers’ rights. Their Fair Food Program aims to protect farm workers from human rights abuses, and Carrboro’s resolution coincides with a march scheduled for Tuesday against Wendy’s.

Carrboro mayor Lydia Lavelle says the town was approached by members of the UNC Student-Farm Worker Alliance, who partnered with Boycott Wendy’s and informed Carrboro of their cause.

“Most of the big fast food chains like McDonald’s and Burger King have signed onto this program and Wendy’s has not,” says Lavelle. “They’re having this march on Tuesday to highlight that [fact].”

With one Wendy’s location in Carrboro on South Greensboro Street, the Board of Aldermen crafted a resolution in support of the Fair Food Program’s goal of protecting farm workers. Lavelle says the town’s message is meant to be positive, asking Wendy’s to commit to farm workers’ rights instead of punishing the restaurant.

“The town is encouraging Wendy’s [to sign a partnership with Fair Food], and I would imagine this group is saying to boycott Wendy’s,” she says.

The march is part of the 4 for Fair Food Tour the Boycott Wendy’s movement is holding this month. After visiting UNC, the leaders of the march will head to Ohio State, Michigan and Florida, calling upon all the schools to end their relationships with the restaurant until it joins the Fair Foods Program.

In response to a previous student-led protest against Wendy’s, director of UNC’s Auxiliary Services Scott Myers said the Wendy’s location on campus is run by the third-party vendor Aramark, which signed onto the Fair Food Program in 2011.

Tuesday’s march will begin at the South Centurion Post Oak Tree on Weaver Street at 2 p.m., before heading to the Wendy’s location in Carrboro and walking to the UNC’s Wendy’s on South Road.

Photo via Town of Carrboro