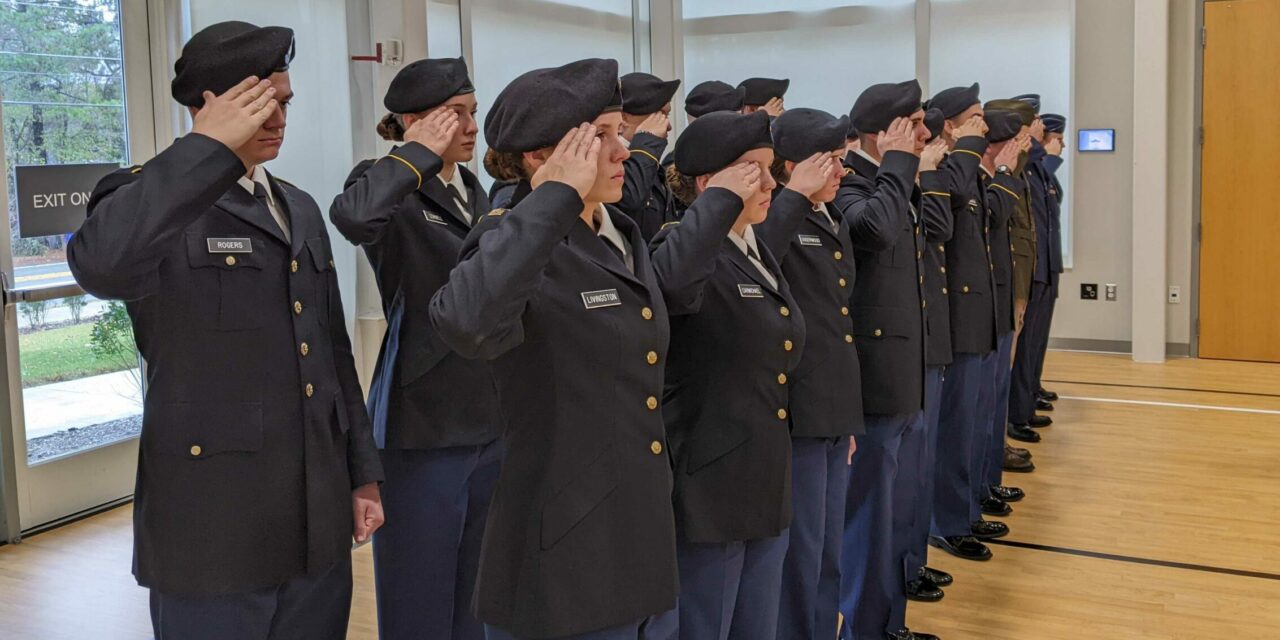 Orange County held its annual Veterans Day ceremony near the site of the county Veterans Memorial on Friday morning, with much of the traditional program. There was a recognition of all armed forces, a prominent guest speaker and an update on the ongoing construction phases of the memorial outside the Seymour Center in Chapel Hill.

There was, however, one new and distinct difference.

Friday’s ceremony marked the first time UNC collaborated with Orange County and had several ROTC cadets join to help participate in the proceedings and honor the military members before them.  A group stood at attention to the side of the stage during the ceremony and afterward had a chance to mingle with many of the local retired veterans also in attendance.

Fred Black, an Orange County resident and retired U.S. Army colonel, said having the UNC students on hand for the event presented a special opportunity to interact.

“One of the benefits is our young cadets and midshipmen see people who have served in various battles and wars over the years,” he said, “and they can talk to them — that’s not something that happens all that often. Talking with them this morning, hearing their stories, has been great.” 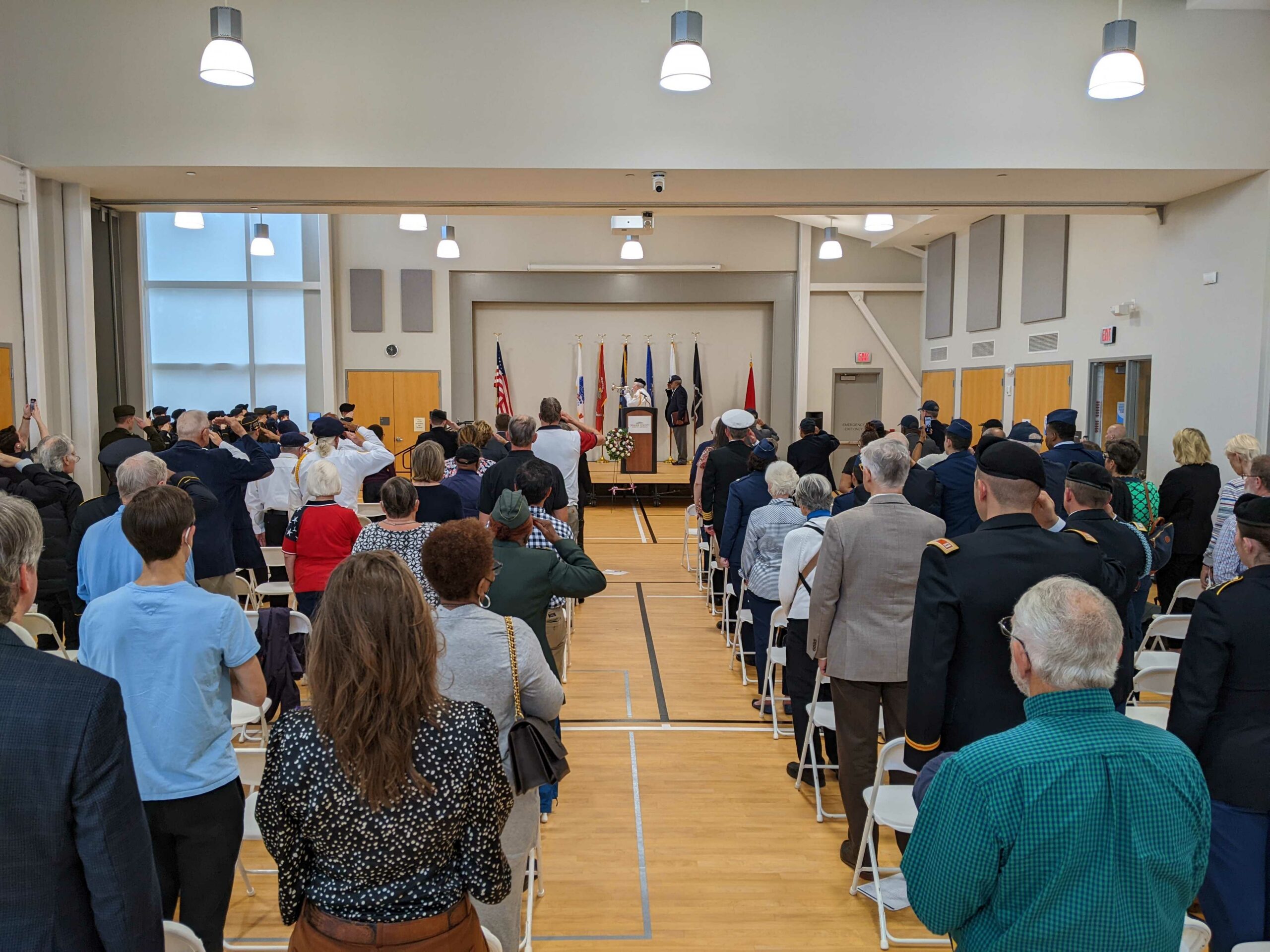 The crowd at Orange County’s Veterans Day ceremony in the Seymour Senior Center stands for a playing of “Taps” to close out the program.

Lieutenant Colonel Dan Hurd heads up the UNC Army ROTC Program at Carolina. After being invited to speak at the 2020 Veterans Day ceremony by the county, he got to experience the local program and agreed to work to bring the young cadets to the annual event moving forward.

“I love having the future of the army with the people that created the legacy that we’re following,” Hurd said. “We wanted to show them that the army is strong, that the UNC Army ROTC Program is producing leaders of character who are committed to that selfless service that those veterans so gallantly showed them. It’s great to see them mingling, [they are] great representatives for our young men and women.”

As part of the celebration having the university involved this year, UNC Chancellor Kevin Guskiewicz helped deliver remarks and introduce the guest speaker, retired Major General George Higgins. The chancellor highlighted ways the university works to support the veteran community with research, as well as offering education to those who have served.

“Carolina is home to hundreds of student-veterans who served their country before beginning their Tar Heel careers,” said Guskiewicz. “They are a vital part of our university, and I am proud of our recent ranking by the U.S. News & World Report as the 12th best college for veterans.” 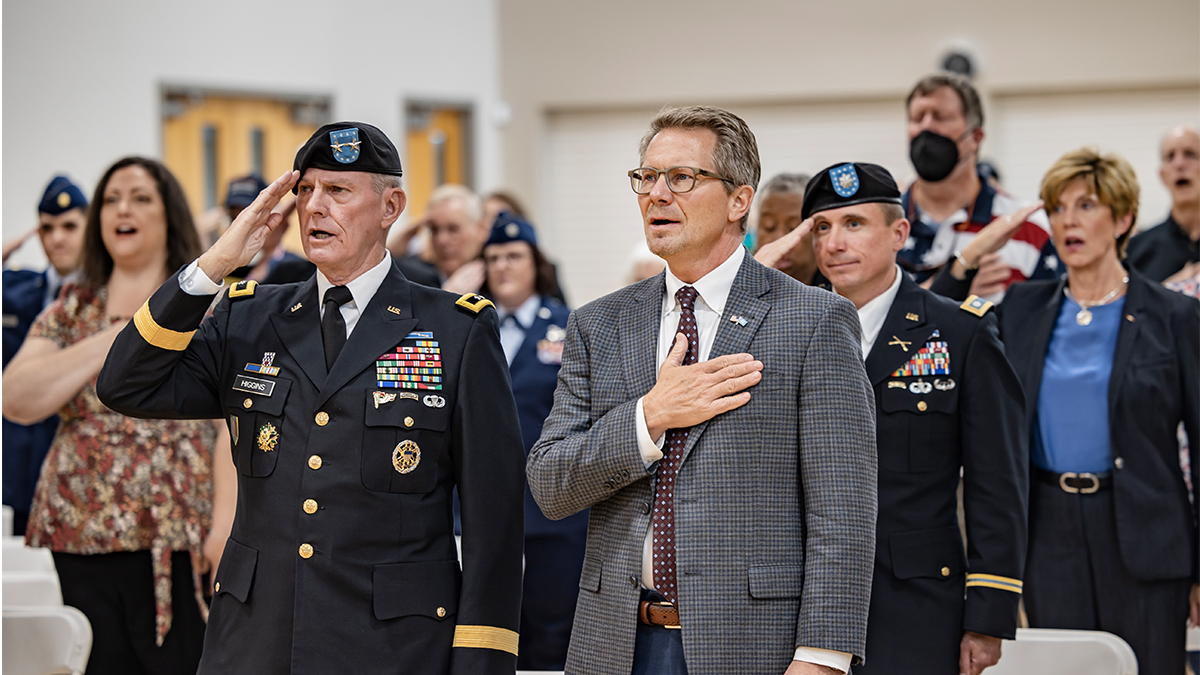 Hurd said on Friday, he was reflecting on the same themes he does each Veterans Day.

“I think about the men and women that served before me, the men and women that I’ve served with [who] have lost their lives, the ones that are still serving,” described the lieutenant colonel. “It’s just special to be part of a community with shared values of selfless service and the values upon which the [U.S.] Constitution is based.”

Black, meanwhile, said he’s also grateful that much of the U.S. military is able to recognize Veterans Day in safer territory.

“This morning as I was reflecting,” he said, “[I thought about how] we have very few soldiers, airmen, Marines in harm’s way this year as opposed to prior years. The fact that we have redeployed most of those folks and only a few are in harm’s way — that’s a positive sign. I think it’s an important sign that we are not engaged in direct conflict right now.”

Black also said he was reflecting on the ongoing development of the Orange County Veterans Memorial. The project, which was launched six years ago on Friday, first broke ground in 2017 on several phases of construction. Phase 1 and 2 are now complete, as a permanent flagpole and brick area with donor names was installed in a forest clearing near to the Seymour Senior Center.

The retired army colonel said each year, he sees photos on social media reminding him of the progression the veterans memorial has taken so far.

“As I scroll through these November pictures, moving through the years,” Black described, “I see the clearing [in the woods]. Then I see the flagpole, then I see the wall, then I see all of the special touches our architect designed, then I see the pavers. And when you stand back and look at that, it’s just amazing to see the progress we’ve made.”

The Orange County Veterans Memorial’s leadership committee provided an update to the crowd at Friday’s ceremony on Phase 3 of the project. The vision is for a permanent, electric kiosk to be installed so visitors can interact with it to read a database of names and learn about the county’s history with veterans. Future phases for the county memorial also include expanded walking paths and reflection areas. 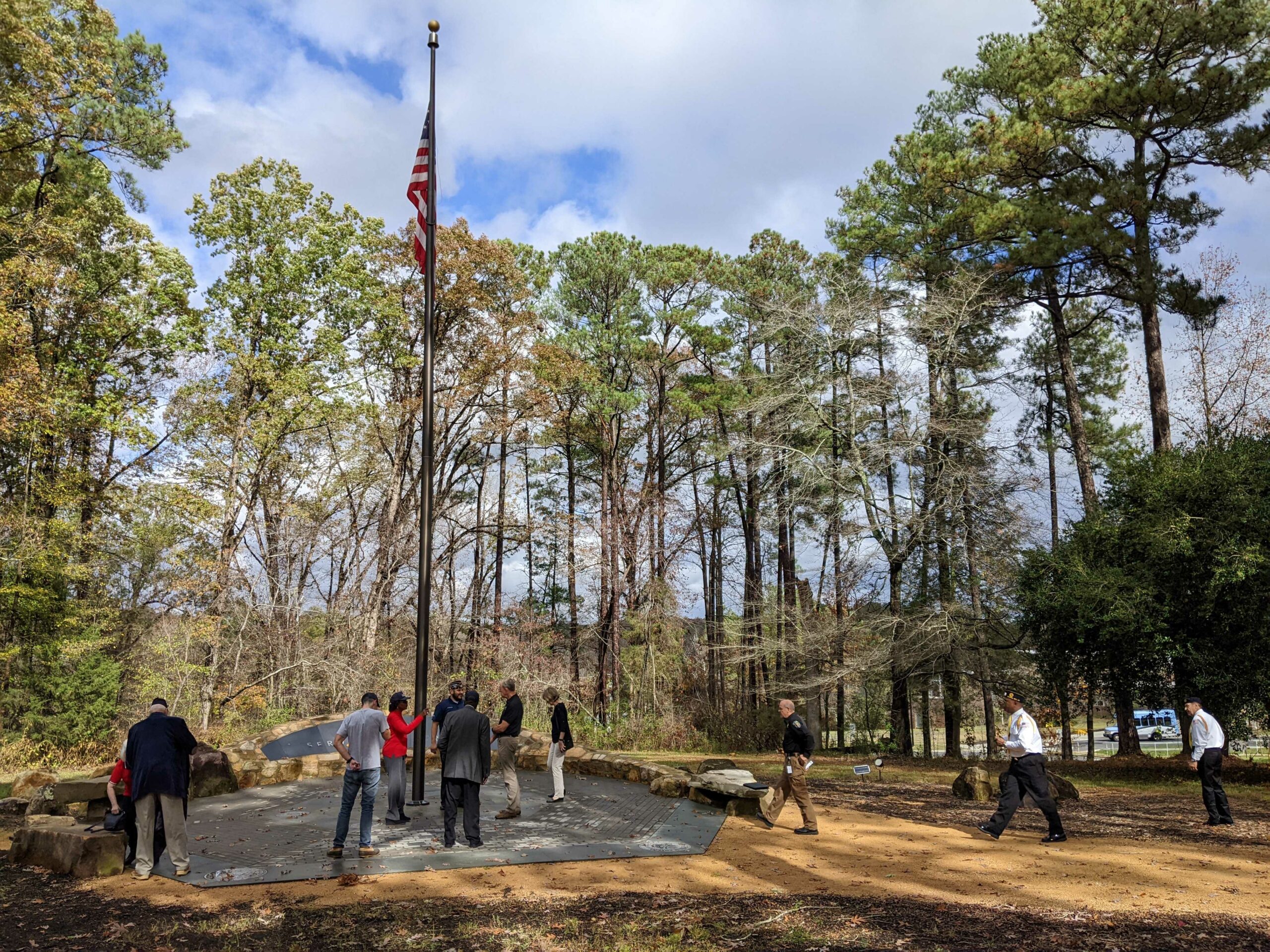